Blues score late in regulation, then in OT to beat Wild 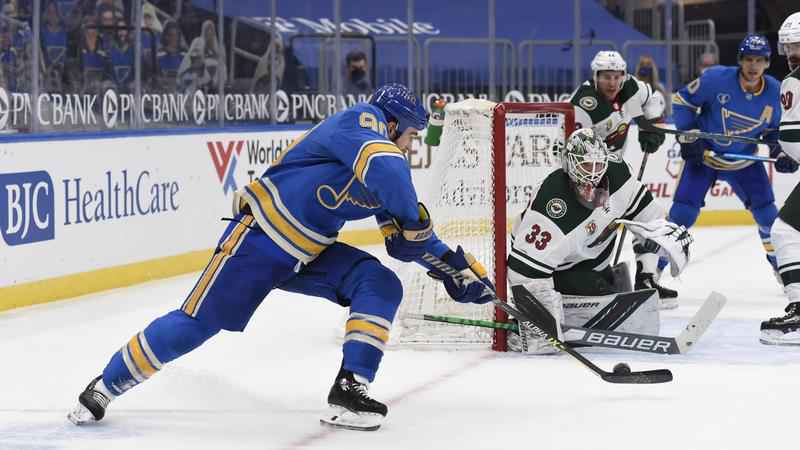 Ryan O’Reilly scored with two seconds left in overtime to give the St. Louis Blues a 3-2 victory over the Minnesota Wild on Saturday night.

Mike Hoffman scored twice for the Blues, tying it with 41.6 seconds left in regulation after the Blues pulled goalie Ville Husso.

O’Reilly skated around the net and muscled a shot past Cam Talbot.

“I knew there wasn’t much time," O’Reilly said. “I had to finish at the net and try to attack. Luckily, the timing was good."

The Blues have won three in a row — beating Minnesota 9-1 on Friday night — to move a point ahead of fourth-place Arizona for the last playoff spot in the West Division. The teams will meet for the third time in four nights on Monday in Minnesota.

“As a team we stuck together well,” O’Reilly said. “We found a way to grind out these much-needed points. It’s a good weekend, but there’s still a lot of work left.”

Dumba scored on a one-timer off a cross ice pass from Ryan Suter to make it 2-1 with 1:48 left in the second period.

Sturm, who was recalled from the taxi squad prior to the contest, scored on a wrist shot from the faceoff dot late in the first period for a 1-0 lead.

Hoffman, who has 11 goals, had been a healthy scratch in three of the last six games and has been a subject of trade rumors.

“Any time you can contribute and help the team get valuable points, it always feels good,” Hoffman said.

Hoffman is not letting the rumors effect his game with the trade deadline looming on Monday.

"Sometimes you’ve just got to deal with them," Hoffman said.

Minnesota left wing Kevin Fiala was held out of the lineup with an upper-body injury, He went off the ice during the pregame warmups. He’s second on the team with 14 goals.

The Wild were able to bounce back with a strong effort after the dismal performance on Friday,

“We competed out butts off,” Minnesota coach Dean Evason said. “We had a couple of bad bounces and that was the difference.”

“I thought tonight was a step in the right direction,” he said. “We needed a response after the last game and we everything right to win the hockey game tonight.”

St. Louis C Robert Thomas is out for at least two weeks with an upper body injury after taking a hit from Minnesota D Carson Soucy late in Friday’s contest. Mike Hoffman, a healthy scratch the previous two games, will replace Thomas.