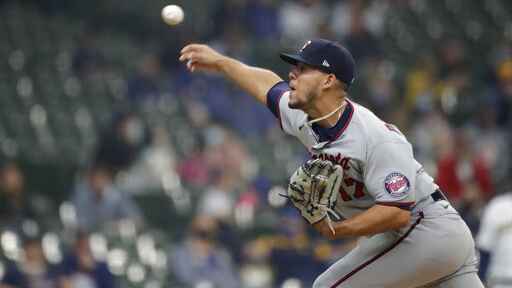 José Berríos and three relievers combined on a one-hitter with 17 strikeouts, and the Minnesota Twins beat Corbin Burnes and the Milwaukee Brewers 2-0 on Saturday night.

The Twins held Milwaukee hitless until Omar Narváez delivered a one-out single to right off Tyler Duffey in the eighth. Neither team had a hit or walk until Minnesota’s Byron Buxton led off the seventh with a homer off Burnes (0-1).

Buxton’s homer came on the 87th and final pitch from Burnes, who recorded 11 strikeouts. Berríos (1-0) struck out 12, hit a batter and didn’t walk anybody in six innings but left after throwing 84 pitches.

This was the first game in which both teams were hitless through six innings since an Aug. 2, 2014, duel between Jake Peavy of the San Francisco Giants and Jacob DeGrom of the New York Mets. Both teams got hits in the seventh inning of that game, which the Mets won 4-2.

The Twins were seeking their first no-hitter since Francisco Liriano’s 1-0 gem over the Chicago White Sox in 2011.

This was the first game in MLB’s modern era in which each of the opposing starters recorded at least 10 strikeouts and allowed no more than one hit.

Minnesota’s Taylor Rogers worked the seventh and struck out the side. Duffey got the eighth and retired the first batter before walking Lorenzo Cain and giving up the hit to Narváez.

Duffey got out of the jam by striking out Daniel Vogelbach and getting Billy McKinney to hit an inning-ending fly to right. Alex Colomé retired the side in order in the ninth for his first save.

Berríos and Burnes combined to retire the first 26 batters of the game — striking out 16 of them — before Burnes’ pitch hit Jake Cave with two outs in the top of the fifth. Berríos then hit Milwaukee’s Keston Hiura with a pitch to start the bottom of the inning.

Buxton’s homer was his second in two games. He’s the first Twin to homer in the first two games of a season since Shannon Stewart in 2006.

Twins: 3B Josh Donaldson went on the 10-day injured list with what the team described as a strained right hamstring. Donaldson hurt himself running out a first-inning double Thursday and was removed from the game in the bottom half of the inning.

“There is some cautiousness involved,” Baldelli said. “We want to make sure he’s 100% obviously before he takes the field, but we’re not sitting here thinking he’s going to miss a lot of time because of this.”

Brewers: 2B Kolten Wong was back in the leadoff spot after getting hit in the right hand with a pitch in the ninth inning of Thursday’s opener.

“The pinkie’s good, a little stiff, but it’s my bottom hand so it won’t affect me too much,” Wong said.

Home-plate umpire CB Bucknor was hit by a pitch in the neck with two outs in the ninth inning. As Bucknor was getting treated, Brewers assistant trainer Dave Yeager appeared to collapse before getting up and walking to the dugout.

The Brewers and Twins conclude their three-game series Sunday with a matchup of right-handers. Minnesota starts Michael Pineda (2-0, 3.38 ERA in 2020) while Milwaukee counters with Adrian Houser (1-6, 5.30).