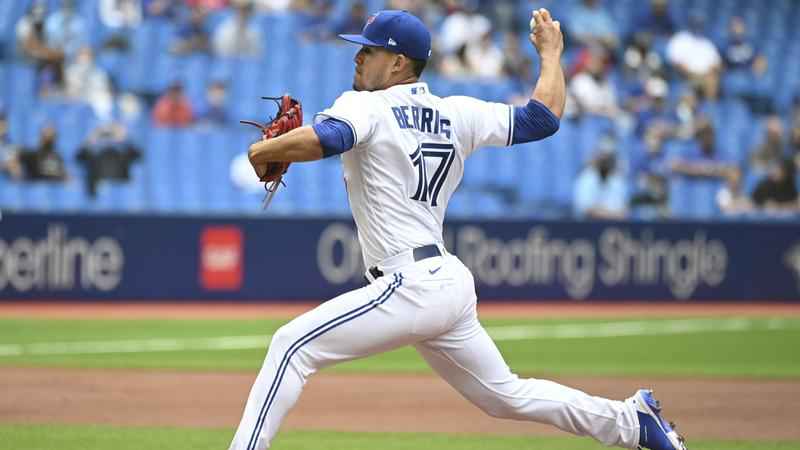 Toronto Blue Jays' Jose Berrios pitches during the first inning of a baseball game against the Kansas City Royals in Toronto.[Jon Blacker/The Canadian Press via AP]

José Berríos pitched six shutout innings in his Toronto debut and the Blue Jays completed a three-game sweep in their first series north of the border since 2019, beating the Kansas City Royals 5-1 Sunday.

Acquired from Minnesota at the trade deadline Friday for two minor leaguers, Berríos (8-5) allowed five hits, four of them singles.

“I feel really happy about what I did today,” Berríos said. “I was able to throw strikes.”

The two-time All-Star walked one and struck out seven, including four straight in the third and fourth innings.

Kansas City loaded the bases with two out in the sixth, but Berríos ended his outing by striking out Edward Olivares and exited with a 5-0 lead.

“I didn’t want to let them take the game from my hands,” Berríos said.

“I got all breaking balls,” Olivares said via a translator. “He worked both sides of the plate.”

Berríos is 3-0 in three starts against Kansas City this season.

Trevor Richards retired all four batters he faced and Tim Mayza got five outs as Toronto won for the fifth time in six games.

The Blue Jays returned to Canada on Friday after having played the entire 2020 season and the first half of 2021 in both Buffalo and Dunedin, Florida, because of border restrictions resulting from the COVID-19 pandemic.

“We couldn’t have had a better series to start out our Toronto season,” Semien said.

After George Springer opened the scoring with an RBI double in the third, Semien hit his 25th homer, a two-run drive off Brad Keller (7-10).

Espinal added a solo drive off right-hander Josh Staumont in the fourth.

The Blue Jays hit two home runs in all three games against the Royals. Toronto has hit an MLB-leading 159 homers this season.

Keller stayed in the game after a visit from the trainer in the third but left after the inning because of lower back tightness. He allowed three runs and seven hits.

Olivares ended Kansas City’s 17-inning scoreless streak with a two-out homer off Mayza in the ninth, his second.

Blue Jays first baseman Vladimir Guerrero Jr. got the day off for the first time this season. The All-Star slugger played all 60 games last year and had appeared 101 consecutive games to begin this season.

Springer and Teoscar Hernandez jokingly taped Guerrero to the railing at the end of the dugout bench in the early innings, but freed him soon after.

“His teammates were telling me, ‘Please play him, please play him,’ because he was driving everybody crazy,” manager Charlie Montoyo said of Guerrero. “That’s just who he is, you know? He’s always having fun. He had a good day off, he earned it, and he’ll be ready to go tomorrow.”

Kansas City’s White Merrifield had a leadoff single in the first, extending his hitting streak to 12 games. Merrifield has had one hit in each of his past 10 games.

Blue Jays: RHP Thomas Hatch and LHP Taylor Saucedo were optioned to Triple-A Buffalo to make room on the roster for Berríos and RHP Joakim Soria.

Royals: Kansas City is off Monday. The Royals open a three-game series in Chicago against the White Sox on Tuesday. LHP Kris Bubic (3-4, 4.58) starts for Kansas City and RHP Dylan Cease (7-6, 4.14) goes for the White Sox.