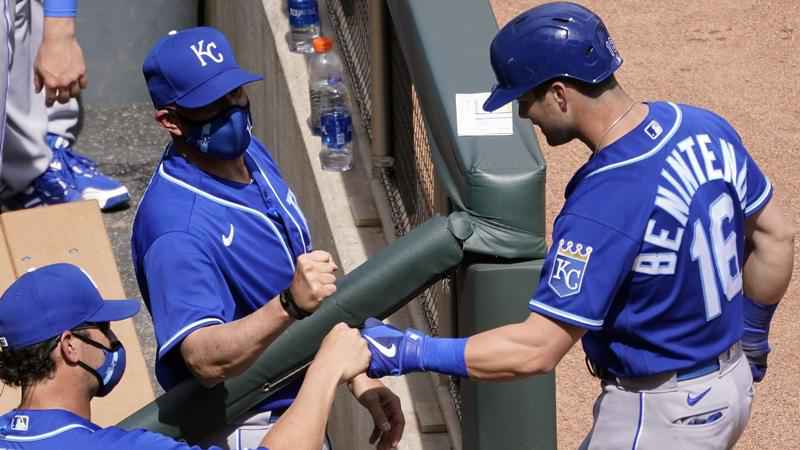 Andrew Benintendi hit two homers, Salvador Perez homered and drove in three runs, and the Kansas City Royals cruised to an 11-3 win over the Minnesota Twins on Saturday.

Danny Duffy (4-1) continued his strong start to the season in helping the AL Central-leading Royals bounce back from Friday night’s 9-1 loss. He allowed one run and two hits in seven innings, striking out seven.

Kiriloff’s homer in the seventh ended Duffy’s streak of 17 straight innings without allowing an earned run.

Duffy started the day with the best ERA in the majors (0.39), ahead of Jacob deGrom’s 0.51 mark. Duffy allowed one earned run in his first four starts this season and exited this game with at 0.60.

Kansas City recalled LHP Kris Bubic from the team’s alternate training site and optioned IF/OF Ryan McBroom to the alternate site. Bubic was 1-6 with an 8.59 ERA in 10 starts for the Royals last season.

Royals: RHP Kyle Zimmer was placed on the injured list prior to the game with a left trap strain. He is 2-0 with one save and a 3.38 ERA in 11 games this season. RHP Jake Newberry was recalled from the team’s alternate site to take his spot on the active roster. … Manager Mike Matheny said RHP Brady Singer is responding well to treatment after taking a liner off his foot in Friday’s game and sustaining a contusion.

Twins: 1B Miguel Sanó (right hamstring strain) will stay in Minnesota with the team as the Triple-A St. Paul team goes on the road to begin its season. Manager Rocco Baldelli said Sanó is doing well physically, but he wants to see Sanó face live pitching before returning him from the injured list.

RHP Brad Keller (2-2, 9.00 ERA) will start the final game of the series on Sunday for Kansas City and will be matched up with Minnesota RHP José Berríos (2-2, 3.04). Keller is coming off his first quality start of the season where he allowed two runs in six innings in a win against Detroit. Berríos hasn’t allowed more than five hits in any start this season and he started the day ninth in the American League with 33 strikeouts.