Becker was off and running late Tuesday, April 6, and the Bulldogs didn’t stop until the final horn made its 84-51 victory over Hill-Murray in the Minnesota State High School League’s girls basketball semifinals at Target Center in downtown Minneapolis. The Bulldogs (18-3) scored the game’s first 16 points en route to a dominating performance that earned a spot in the Class AAA championship game on Friday against Marshall.

Senior guard Julia Bengtson fueled a potent Bulldogs’ attack with 19 points, a performance she capped on a three-pointer from the deep corner that gave Beker an 82-48 lead with 2:07 remaining. She also had 10 rebounds and seven assists. Junior guard Adeline Kent finished with 18 points and senior guard Courtney Nuest and sophomore guard Maren Westin had 13 apiece.

The Bulldogs outscored the Pioneers 58-32 in the paint and 29-11 on Fastbreak points. Becker also scored 24 points off of Hill-Murray’s 21 turnovers.

Becker opened the season with 14 consecutive victories before ending the regular season with three consecutive losses. Those setbacks were to Holy Angels, Minnetonka and Hopkins, respectively. Holy Angels lost to Marshall in the first Class AAA semifinal. Minnetonka and Hopkins are Class AAAA powers. Hopkins, on a 78-game winning streak, is favored to claim the big-school crown.

Senior guards Courtney Nuest and sophomore guard Maren Westin scored nine points each in the first half when the Bulldogs are scoring at a blistering pace en route to a 42-19 lead at the break. Junior guard Adeline Kent and senior guard Julia Bengtson added eight each as the Bulldogs shot 56 percent from the field in the first half. On the defensive end, Becker coaxed Hill-Murray into 15 turnovers. Junior guard 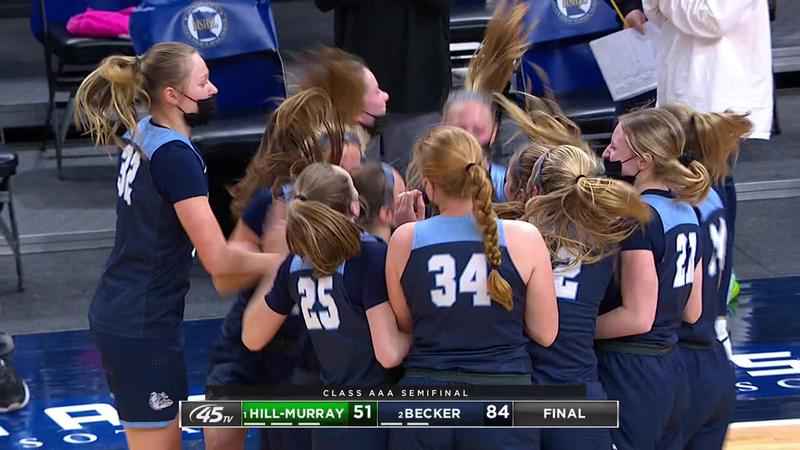 Becker beats Hill-Murray to advance to the Class 3A finals.[KSTC/Ch.45]

Ella Runyon had 19 of her 27 points in the second half for the Pioneers. Senior guard Bella Hartzel was the only other Hill-Murray player in double figures with 12.

Hill-Murray was hoping to earn a spot in the Class AAA championship game for the first time since 2011 when it finished runner-up for the second consecutive season. The Pioneers entered the Class AAA semifinals on a 20-game winning streak after a season-opening loss to Minnetonka.