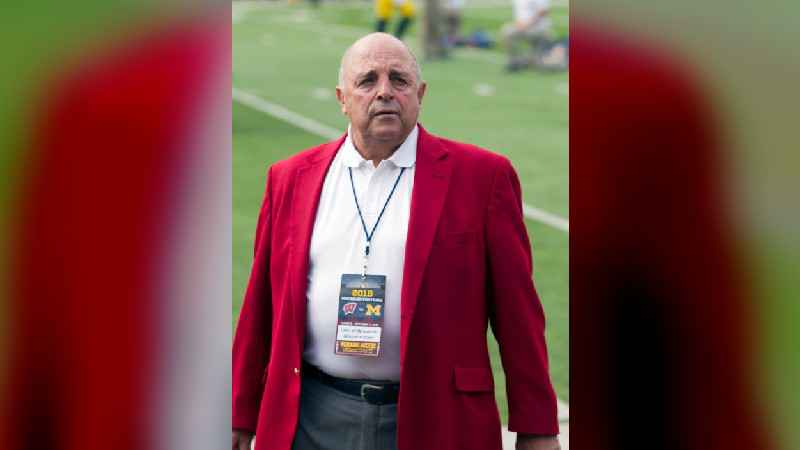 FILE - Wisconsin athletic director Barry Alvarez is shown on the field before an NCAA college football game against Michigan at Michigan Stadium in Ann Arbor, Mich., in this Saturday, Oct. 1, 2016, file photo. Wisconsin athletic director Barry Alvarez is retiring after a three-decade run in which he transformed the university’s football program and later guided the Badgers to their greatest all-around sports success in the school’s history. Alvarez announced Tuesday, April 6, 2021, he would retire on June 30.[AP Photo/Tony Ding, File]

Wisconsin athletic director Barry Alvarez is retiring after a three-decade run in which he transformed the university’s football team and later guided the Badgers to their greatest all-around sports success in school history.

The 74-year-old Alvarez said Tuesday he would retire on June 30.

“It has been an honor to be a part of Wisconsin athletics and I take great pride in all we have accomplished over the last three decades,” Alvarez said in a statement. “From championships, to improvements on campus, to impacting thousands of student-athletes, it’s been a great ride."

Alvarez arrived at Wisconsin in 1990 as football coach and turned one of the Big Ten’s weakest programs into one of its strongest. He became athletic director in 2004 and briefly served in a dual role before stepping down as football coach after the 2005 season.

Wisconsin’s football team went a combined 9-36 in the four seasons before his arrival. Alvarez led the Badgers to three Rose Bowl titles and made them regular Big Ten contenders by emphasizing a strong defense and rushing attack.

He was inducted into the College Football Hall of Fame in 2010.

Other Wisconsin programs had similar success during his stint as the Badgers’ athletic director.

Wisconsin teams won 16 national titles under Alvarez, though five of those came in women’s lightweight rowing, a sport whose championships aren’t sanctioned by the NCAA.

The Badgers also have won a total of 74 conference, regular-season or tournament championships with Alvarez as athletic director. Fourteen different teams have won conference titles during his regime.

Wisconsin finished in the top 30 in the Directors’ Cup 15 times in his first 18 seasons as athletic director.

“His work here has positively impacted the lives of countless student-athletes who have come through our doors," Wisconsin chancellor Rebecca Blank said in a statement. "His leadership has also lifted our university and our state. Barry’s legacy will live on whenever Badgers take the field.”

Alvarez emerged as a national leader in college athletics. He was named a chair of the NCAA’s football academic enhancement group in 2008 and was on the College Football Playoff selection committee for three years. He was named the Under Armour athletic director of the year in 2017-18.