Baldelli not around to see Twins rally and beat Chicago 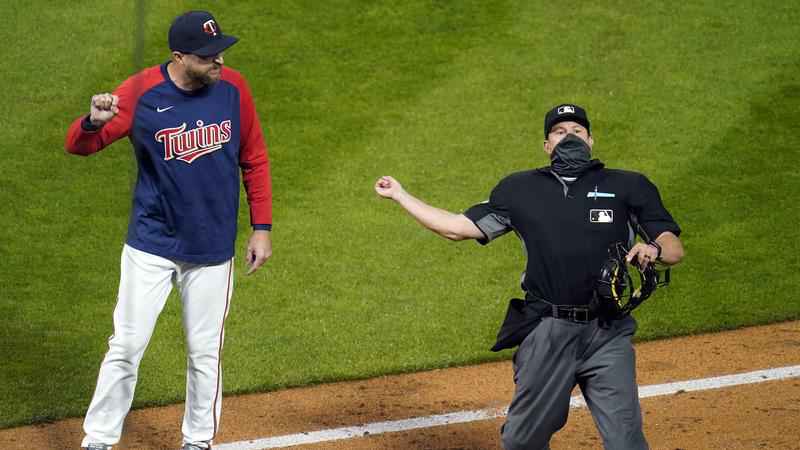 Minnesota Twins manager Rocco Baldelli, left, is ejected by home plate umpire Jim Reynolds after complaining about the ejection of pitcher Tyler Duffey in the seventh inning of the team's baseball game against the Chicago White Sox on Tuesday, May 18, 2021, in Minneapolis.[(AP Photo/Jim Mone)]

Mercedes was the center of attention once again, one day after he hit a controversial homer in the ninth inning of Chicago’s 16-4 victory. Twins reliever Tyler Duffey was ejected for throwing behind Mercedes in the seventh, and that seemed to spark the slumping Twins.

Sanó’s two-run drive off Aaron Bummer (0-2) with one out in the eighth tied it at 4. With two out and runners on second and third in the ninth, Polanco singled to right against Liam Hendriks.

The Twins had dropped two in a row, including an ugly 16-4 loss to AL Central-leading Chicago on Monday night. Taylor Rogers (1-2) got three outs for the win.

Mercedes had Minnesota’s attention after he connected Monday night, driving a 3-0 pitch from infielder Willians Astudillo deep to center in the ninth. White Sox manager Tony La Russa said Mercedes made a mistake, and the Hall of Fame skipper apologized to the Twins.

With one out in the seventh Tuesday night and the White Sox up 4-2, Mercedes came to the plate and Duffey threw the first pitch of the at-bat behind the slugger’s legs. Duffey and manager Rocco Baldelli then were ejected by home plate umpire Jim Reynolds.

Bailey Ober pitched four innings for the Twins in his major league debut after Michael Pineda was scratched with an abscess in his inner thigh. The 6-foot-9 Ober was charged with four runs and five hits.

White Sox: 1B José Abreu missed his second straight game with left ankle inflammation. Chicago hopes he can return on Friday against the New York Yankees.

Twins: Max Kepler returned to the lineup after missing Monday’s game with a hamstring injury. … Baldelli said C Mitch Garver was still sore after taking a foul ball off his right knee in Monday’s game. Garver has a contusion but was available to play. … RHP Kenta Maeda skipped his bullpen session as he deals with groin tightness, but Baldelli said he could still factor into the rotation at some point this week.