Newlyweds Kevin and Megan Wilgenbusch, who grew up in Wisconsin, couldn’t have asked for a better surprise on their big day.

While the couple didn’t invite the Green Bay Packers to their La Crosse wedding, the new husband and wife tell 5 EYEWITNESS NEWS the players were absolutely welcomed as soon as they pulled into the venue parking lot.

Kevin and Megan were still buzzing with excitement during their interview Sunday with reporter Andrea Lyon. The pair told Lyon they were confused when a large green bus pulled up.

“I thought they were turning around, doing something weird and then these big football players got out and they were like, are you guys Packers fans? And we are like, of course! We are from Wisconsin, right?” Kevin said.

The pair, who now live and work in Rochester, Minnesota, said even before the Packers showed up, the day had gone perfectly. Between the weather, a hand-crafted song Kevin wrote for Megan, surprise sparklers during their first dance and an epic fireworks show to top off their wedding day, both agreed it was a day to remember. Then, in comes a Packers roster from the past.

“They end up coming in. We have this really awesome globe that all of our guests signed, they signed our globe. They took some photos in the photo booth. They were dancing,” the two described together as they finished each other’s sentences.

The Wilgenbusch’s say the players stopped in for about 40 minutes at Celebrations on the River and left everyone with amazing memories, like when former Packer Mike Neal challenged one of their friends to an arm wrestling match. In the video below you can see Neal pretend to yawn as the other man struggles to make the strong NFL player move.

Kevin and Megan also raved about Tony Moll, who they say showed off how versatile he is. 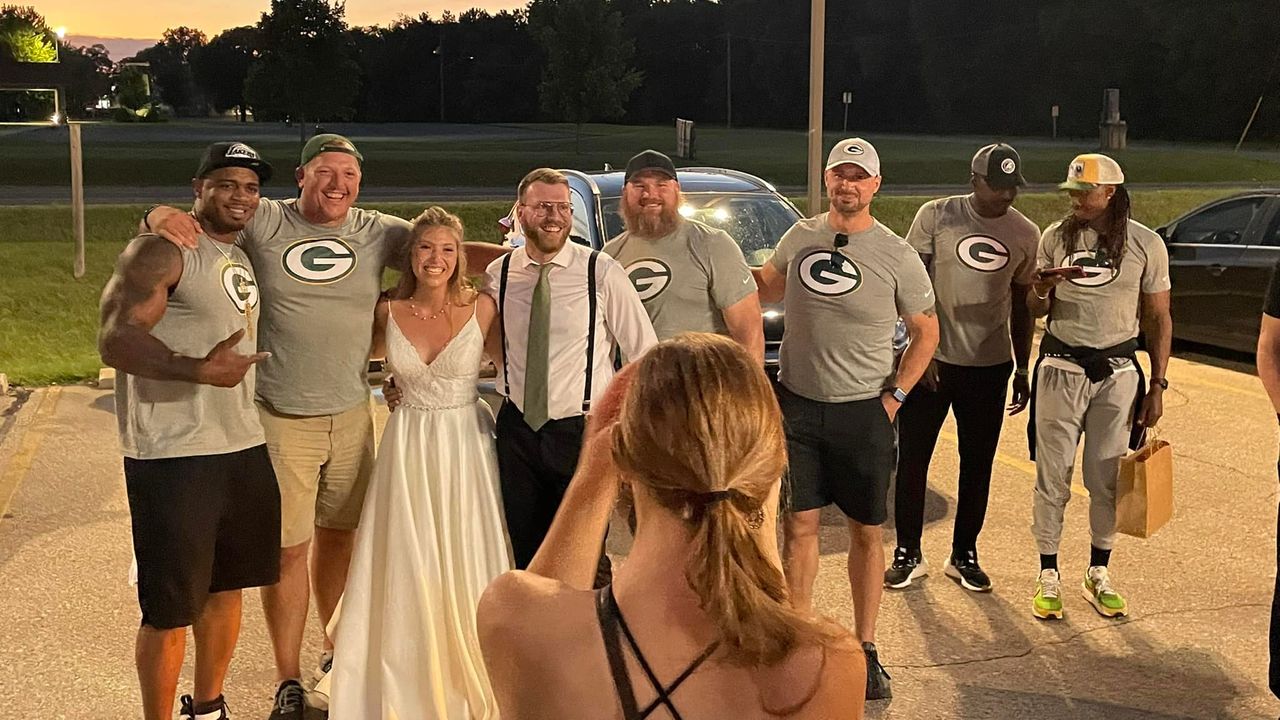 “(Moll) is absolutely hilarious. He was just ripping up the dance floor. His personality is just, he’s just hilarious. He definitely stood out,” Kevin added.

After gushing about all of the excitement, the couple expressed their gratitude for how nice it was of the entire group to take the time to change their lives forever.

“We cannot wait for our photographer to send us the photos, and just reminisce over it,” they said.

To help kick off the football season and give fans the opportunity to visit with some of the Packers alumni, the Packers Road Trip returned for a second year running from July 13-17. The road trip featured several past players and surprise stops across Wisconsin.

Included in the group for 2022 was Packers President and CEO Mark Murphy along with alumni Tramon Williams, James Starks, Mike Neal, Tony Moll, Jason Spitz and Scott Wells, who all rode together on a Packers-themed bus.

The Packers plan to return to Lambeau Field on Sunday, July 17.