A potent winter storm is expected to continue to cause blizzard conditions across Minnesota into Friday while parts of the southern half of the state could get up to a foot of snow.

Meanwhile, the Minnesota Department of Transportation (MnDOT) reported that roads in southwestern Minnesota were closed at 10 p.m. on Thursday due to blizzard conditions and zero visibility.

Closures include Interstate 90 from the South Dakota border to Blue Earth, as well as state highways in the following counties:

The closures are expected to remain in effect through the night and possibly into Friday morning until conditions improve.

MnDOT also reminded drivers that it’s illegal to drive on a closed road. Penalties can include a fine of up to $1,000, 90 days in jail or both.

No travel advisories are also in place in many counties, including Rock, Nobles, Jackson and Cottonwood. 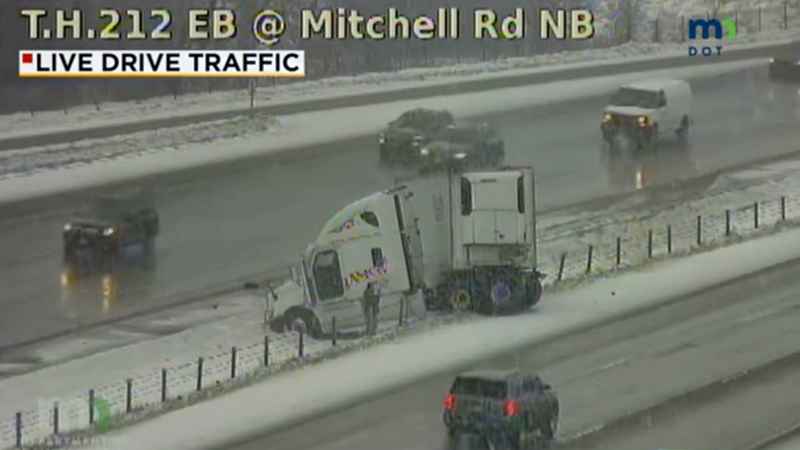 A semi truck was caught up in the cable median barrier on Highway 212 near Mitchell Road in Eden Prairie.[MnDOT Traffic Camera]

Worthington, Slayton, Willmar and Alexandria could get between 3 and 7 inches of snowfall by Friday afternoon when the storm is set to wind down, the weather service said.

Lesser amounts are expected in an area from Fergus Falls to Brainerd to Hayward, Wisconsin.

A winter storm will affect the region Thursday into Friday. A Blizzard Warning and Winter Storm Warning have been issued for portions of MN. Expansions to the warnings may be necessary later. Widespread significant snowfall and strong, gusty winds are expected. #mnwx #wiwx pic.twitter.com/TX9pDv2OWq

Additionally, a winter storm warning has been issued for multiple Minnesota counties until Friday evening.

According to KSTP Meteorologist Wren Clair, 3-6 inches of snow is likely by Friday afternoon with up to 8 inches of snow possible in the south metro.

The winter storm warning is issued for the south metro until 6 p.m. Friday, Clair said.

Friday will have a high of 32 degrees with a low of 24 degrees.

Snow emergency information where you live

MnDOT advises drivers to prepare in advance for any driving by having a full tank of gas as well as a winter kit in their vehicles.