Imagine evacuating from a war zone, traveling alone with your newborn baby.

For Olga Vytvytska, and her baby son Michael, this wasn’t fiction but a harsh reality of the war in Ukraine.

“It was absolutely hard … terrifying,” Vytvytska, 39, recalls. “I understand I should leave Kyiv.”

With her friend Olena Zaslavska, now living in Minnesota, helping to translate, 5 EYEWITNESS NEWS met Olga on a zoom call from Estonia, where she’s staying with family.

“It was dangerous for us. All the time, we hear bombs and shells,” Vytvytska said. 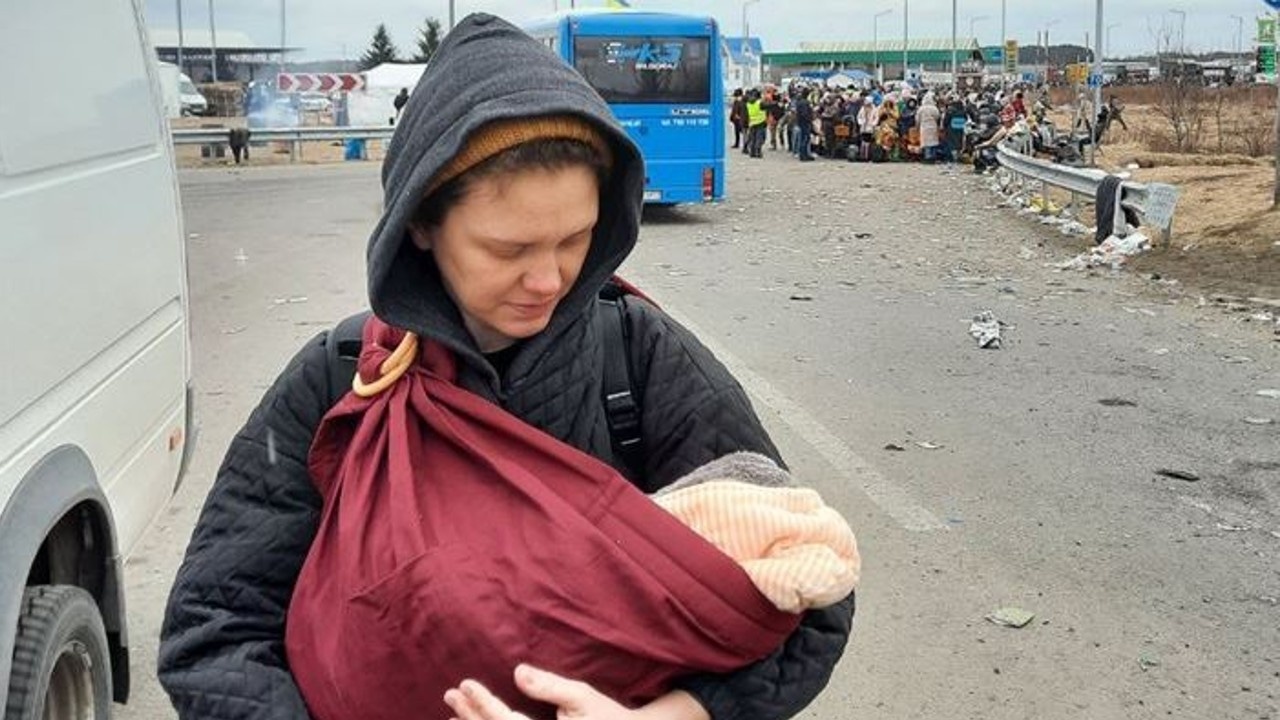 Olga Vytvytska and her newborn.

Vytvytska’s newborn baby was doing well, she noted, adding, “he sleeps over me,” as she smiled and looked off-screen at her sleeping son.

“She says the baby can probably wake up and try to interrupt our interview,” Zaslavska added.

Vytvytska described how she and her husband Evgen tried to safeguard Michael from Russian attacks with her words and photographs. She is searching desperately for baby formula, now in short supply.

And when the air raid sirens sounded, they took their baby down into the subways, now converted into bomb shelters, which Vytvytska says were frighteningly cold.

“So Olga said she didn’t want to leave Kyiv,” Zaslavska translated. “But she heard that a one-month-old baby — like her son — just recently died because it was too cold in the bomb shelter.”

By March 7, the young family had had enough.

Vytvytska and baby Michael would be among the 4.6 million people fleeing Ukraine, searching for safety.

They began a harrowing, 660-mile journey from Kyiv to Tallinn, Estonia, the capital city.

Evgen was required by law to stay behind because, at 39-years-old, he’s of military age and could be called up to fight.

“It was very hard because people were like, crazy,” Vytvytska remembers. “I took [a] backpack with baby stuff. But it was very hard to get into the train.”

Somehow, she says, she managed to get on board and even got a seat.

Vytvytska says with so many people on the packed train, it was standing room only for more than ten hours.

About half the trip was in darkness.

“For about five hours, the train had gone completely dark to avoid being seen by the Russians, so they wouldn’t bomb it,” Zaslavska translated. “She told me she tried to feed her baby in complete darkness, and the story was absolutely horrifying.”

But near the Polish border, strangers saw her plight and offered to help.

“She was lucky enough because it was cars with volunteers who could get to the border, avoiding those long lines,” Zaslavska said. “Because she was with a tiny baby, people would let her cut in front of them.”

Once inside Poland, Vytvytska stayed the night in a refugee center.

A cousin came to pick her and the baby up, and drove them safely to northern Estonia, near the Finland border.

“It was harder than I imagined,” Vytvytska said quietly.

We asked Olena what she thought of her friend’s journey.

“I might cry,” she says. “I’m so proud of my people who just tried to survive, trying to defend their people,” Zaslavska declared. “The one thing I feel is guilt that I am here in safety, and they are there dying. I know it’s irrational, but that’s my feeling.”

The two women have been friends for decades since their early 20s.

Even after Zaslavska moved from Ukraine to Minnesota in 2016 to live with her sister, the two kept in touch.

For her part, Vytvytska is hoping to return home in the next few months.

“Absolutely, Ukraine will win,” she says. “Absolutely, I will come back, back at home, yes.”

“So she says now, we will pay a high price for that, but we will survive,” Zaslavska added.

But she’s concerned about so many others in Ukraine who remain in harm’s way.

“You might live your innocent, happy life, and you never expect something like that to happen, like it happened to the Ukrainian people,” Zaslavska explained. “So just be cautious and count your blessings.”