A truck convoy will be driving through Minnesota and Wisconsin on Friday and Saturday as part of a weekend event.

Truckers will be making their way down Interstate 94 as part of the “Truck Yeah Freedom Weekend,” and bridge rallies are also being held in the Twin Cities metro area as the truckers pass through.

The event is being held in response to mask and vaccine regulations put in place due to COVID-19.

Rallies were also held on bridges over I-94 in Monticello, Maple Grove, Woodbury, Oakdale and Brooklyn Center.

According to organizers, the truck convoy is expected to drive through Maple Grove around 9:45 a.m., and arrive at the Hudson, Wis., truck stop at around 11 a.m. 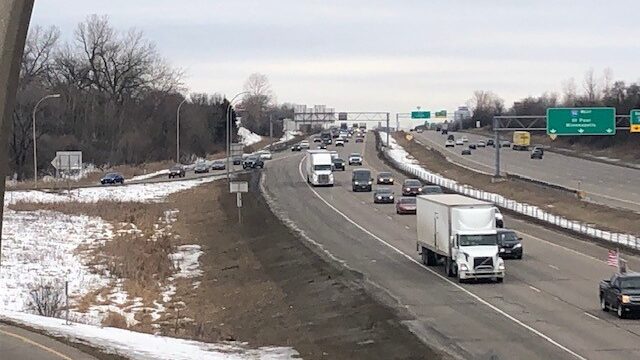 Truckers drive on I-94 during a Freedom Rally on March 4, 2022. Credit: KSTP/Todd Raaen

Dozens of trucks could be seen moving through the Twin Cities metro area Friday morning, with many vehicles displaying American flags.

According to the Minnesota State Patrol, law enforcement has been in contact with organizers of the convoy and will be working to make sure the convoy safely moves throughout the state.

Drivers on the road should expect to see the convoy, as well as supporters on bridge overpasses, according to the State Patrol. The State Patrol says it doesn’t expect any traffic delays but the convoy may move slower than the posted speed limit.

Lt. Gordon Shank, the Public Information Officer for the Minnesota State Patrol, says additional resources were provided to make sure drivers were safe on the highways. He says there weren’t any arrests made in relation to the event, however, troopers are investigating a crash involving three vehicles in the area.

The Wisconsin State Patrol issued the following statement regarding the convoy:

“WisDOT’s primary goal is to make sure everyone is able to travel through the state safely. Wisconsin State Patrol is aware of the truck convoy’s plans to be in Wisconsin Friday into Saturday. WisDOT and Wisconsin State Patrol are collaborating with county and local law enforcement agencies to monitor the convoy while it is in the state. Officials are prepared for any potential incidents, but do not anticipate major traffic disruptions.”

Congressman Pete Stauber (R), who represents Minnesota’s 8th Congressional District, announced Friday he has sent a letter to President Joe Biden saying he supports trucker in the United States – as well as Canada – who are protesting vaccine mandates.

Stauber’s letter, which is also addressed to Canadian Prime Minister Justin Trudeau, says “personal medical decisions should be made between a patient and their doctor”, and goes on to say vaccine mandates “are an unprecedented governmental overreach”.

Stauber also asked both Biden and Trudeau to end COVID-19 restrictions, saying “the continued ostracization of individuals who do not wish to get the COVID-19 vaccine is discriminatory, plain and simple.” CLICK HERE to read his full letter.