A portion of southbound highway 100 is back open after a large police presence caused a portion of the highway to temporarily close Thursday morning.

A Minnesota Department of Transportation (MnDOT) camera at one time showed roughly a dozen squad cars on the highway near Duluth Street.

The traffic camera also showed a vehicle in front of the squads on fire, which ignited at the end of a police chase following a shooting in Brooklyn Park earlier in the morning.

According to Brooklyn Park police, officers were called to the 1500 block of 89th Avenue for a report of multiple gunshots, as well as a vehicle driving away from the scene at a high rate of speed.

When officers arrived, they found evidence of shots being fired, and also found a home – which was occupied at the time – had been hit. 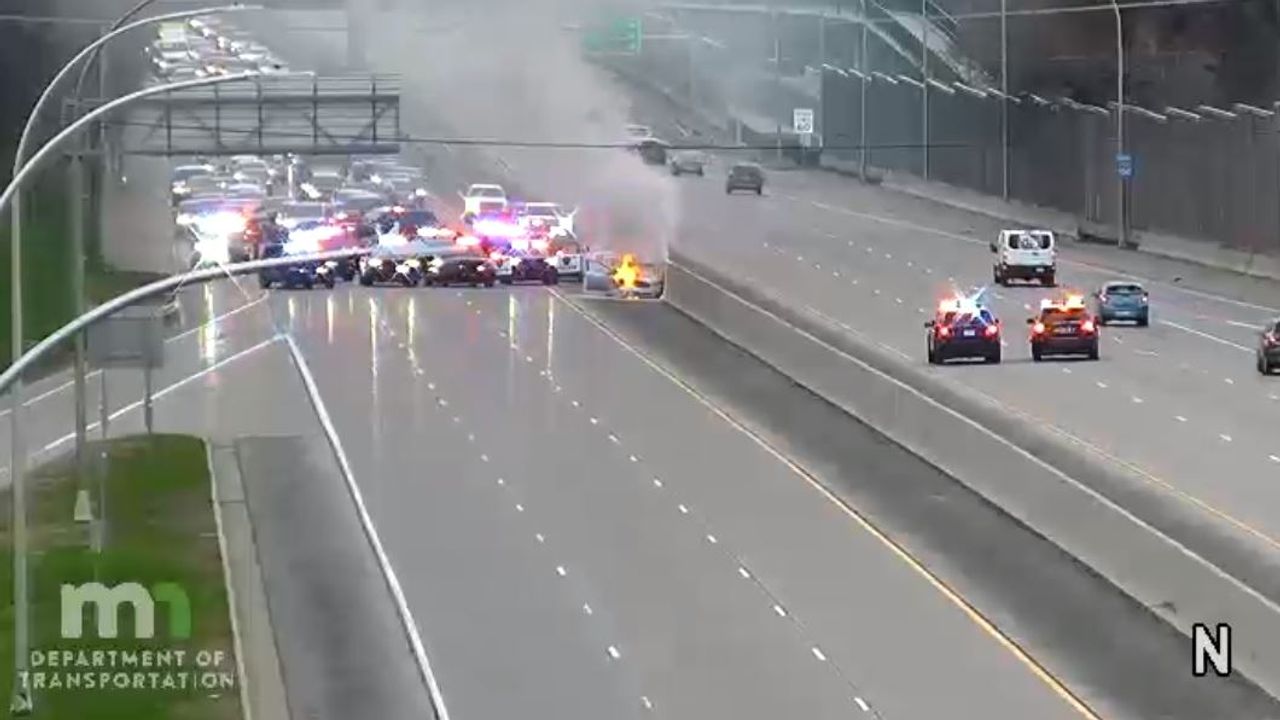 A MnDOT traffic camera shows a car fire after it was involved in a police chase the morning of Thursday, May 5.

Police say no one was injured inside the home.

While investigating the shooting, officers received a report of a suspicious vehicle on the 8400 block of Riverview Lane, and discovered it matched the description of the vehicle spotted driving away from the shooting scene. Police add that before they arrived at this scene, the man fired shots at an address on Riverview, and damaged a vehicle. Again, no injuries were reported.

When they arrived, police attempted to stop the driver – identified as a 19-year-old Brooklyn Park man – but he didn’t comply, and drove away from the scene, causing a chase to begin.

According to police, the driver made his way onto Highway 100, where it became disabled and brought the vehicle to a stop, where it then started on fire and caused delays to morning commuters along Highway 100.

Police say the suspect then surrendered to police without incident, adding no one was injured during the chase. They also say a firearm belonging to the driver was found inside the vehicle.

Officials say the vehicle used during the chase was reported stolen from a Brooklyn Park home when it was left unattended with keys inside.

Police say the suspect is being held on multiple felony offenses at the Brooklyn Park Police Department.

Lanes began reopening around 7:15 a.m. after the stretch of highway was completely blocked off around 6:15 a.m. Traffic was flowing freely shortly before 8 a.m.

You can find a map of real-time conditions across the metro can be found by CLICKING HERE.