‘You get in this job to help people’: Eagan police officers save man’s life during water rescue

Two Eagan police officers say they’re proud to be part of the team that helped save a man’s life during a water rescue on Monday.

That man suffered a medical emergency while behind the wheel and ended up driving into a 7-foot deep retention pond near the intersection of Highway 13 and Silver Bell Road.

"We responded to the call, lights and sirens," Officer Justin Boughton, with Eagan Police, said.

"Your instincts kick in," Eagan Police Officer Sean Farnham added. "When we swam out to the vehicle, water was already up to the guy’s knee." 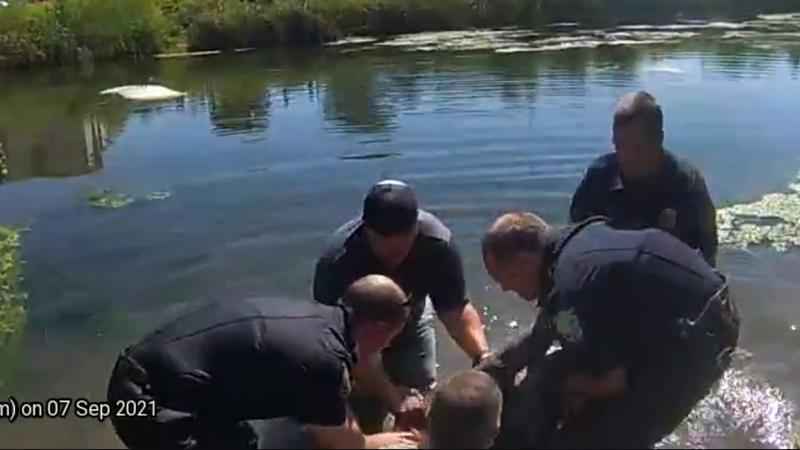 Boughton and Farnham swam to save the man, who they say was unconscious and buckled in his seat when they found him.

"It definitely made it more tricky to get the individual out, we couldn’t open the door because of the water pressure," Farnham said.

"The window was down so I was able to reach in and undo the seatbelt," Boughton said. "It took both of us to get him out of the vehicle."

Eventually, the man was brought to shore safely and was taken to a hospital in stable condition.

"He was pretty startled on what was going on and we were, eventually, able to calm him down," Boughton said.

Boughton said that while they don’t practice water rescues, he’s grateful to be part of the team that helped save the man’s life.

"You get in this job to help people and to be in the right place at the right time," Boughton said.

For Farnham, this was the second time this summer he’s been in a situation where he’s been part of a vehicle-involved water rescue.

"I’m very proud I was able to work with my partners to come to a great resolution in both those calls," Farnham said.

For Farnham’s selfless dedication to the job in the water this summer, he’s earned himself a new nickname within the department.

From the start of a call to the end of one, these officers know what’s on the line and say they’re happy to risk their lives to help others.

"Yeah, I’m definitely proud of the work that we all do here," Farnham said.