The family of Daunte Wright met the family of George Floyd in Minneapolis before an emotional news conference Tuesday.

George Floyd’s brothers and girlfriend had exited the courthouse during a lunch break in the Derek Chauvin trial.

The families prayed together, alongside other families impacted by police encounters, including loved ones of Emmet Till, Jamar Clark and Justin Teigen.

"To the world, I simply say, damn again? And when I say ‘damn again,’ I mean another black man or woman killed at the hands of the police using excessive force," Brandon Williams, George Floyd’s nephew, said 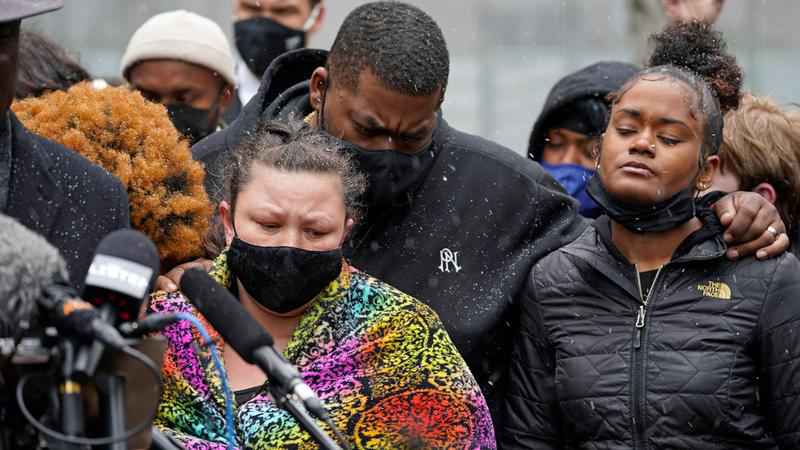 Katie Wright, left, the mother of Daunte Wright, and other family and friends gather during a news conference Tuesday, April 13, 2021, in Minneapolis as family attorney Ben Crump speaks. Daunte Wright, 20, was shot and killed by police Sunday after a traffic stop in Brooklyn Center, Minn. [AP Photo/Jim Mone]

Daunte Wright’s mother, Katie, fought back the tears while talking about the last time she spoke with her son. She said she had been on the phone with Daunte during Sunday’s traffic stop, heard the scuffle with police and then received a Facetime from the passenger in her son’s vehicle, who told her Daunte had been shot and was unresponsive.

"That was last time I seen my son. That was the last time I heard from my son. And I have had no explanation since then," Katie Wright said.

The family spoke about the devastation they have felt since Daunte’s death.

"His smile, oh Lord, the most beautiful smile. Y’all took that. My nephew’s blood is on your hands," cried Naisha Wright, Daunte’s aunt.

"I’m just so messed up about it because I just feel like they stole my son’s dad from him," said Chyna Whitaker, the mother of Daunte Wright’s child.

George Floyd’s brother Rodney Floyd added, "Hearing this young man’s baby crying, that baby’s going to be crying for a long time, crying for its father."

"We will fight for justice for this family, just like we’re fighting for our brother," said Philonise Floyd, another of George Floyd’s brothers.

Both the Floyd family and the Wright family are represented by national civil rights attorney Ben Crump, who has been in the Twin Cities for the Chauvin trial.

"If ever there was a time when nobody in America should be killed by police, it was during this pinnacle trial of Derek Chauvin," Crump said. "We believed with everything in our heart, Katie, that police would be on their best behavior, that they would exercise the greatest standard of care."

Crump, alongside attorney Jeff Storms, questioned Brooklyn Center Police Department’s explanation of the shooting. On Monday, the police chief said it appeared Officer Kim Potter meant to pull out her taser instead of her gun, as she fired at Wright.

"How many times in training over the course of 25 years has this officer pulled, aimed and shot her firearm in practice? So don’t tell us it’s an accident because it undermines the tragic loss of life this family has experienced," Storms said.

The Wright family called for Potter to be prosecuted.

"Put her in jail like they would do any one of us. They would put us under that jail cell. It wouldn’t be no accident. It would be murder," Naisha Wright said. "Prosecute like they would prosecute us, the highest. We want justice. No justice, no peace."