The 3D printers in 35-year-old Matt Behning’s basement have a rhythm as regular as a heartbeat.

"Yeah, it’s like a little mini-production line," he smiles. "I came up with a design and I got some help along the way, some great friends, and it just blossomed from there."

For nearly a year now, Behning, an ICU nurse at Abbott Northwestern Hospital and about 20 volunteers have been making thousands of face shields and frames for people on the front lines of the pandemic.

"At work, there’s just these more flimsy shields," Behning said. "That’s not the employer’s fault or anything, but they just don’t cover as well, in my opinion."

Virtually the entire operation is run out of Behning’s Woodbury home. His garage has room for one 3D printer, while several more— are humming away in his basement. 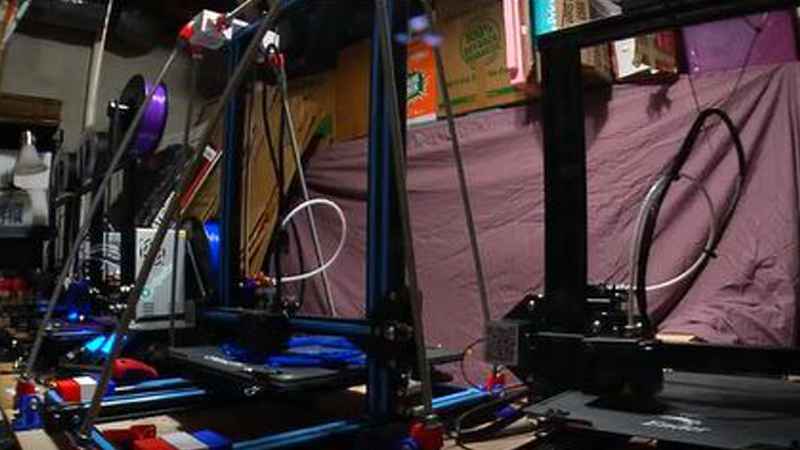 Layer by layer, the printers— ‘like a glue gun on steroids,’ someone said— stack up rows of plastic that harden into a programmed structure.

In this case, the semi-circular shaped frame for a face shield.

"It starts out with the program, and then the 3D printer just prints up the filament in plastic, layer by layer," Behning said.

Since April of 2020, the 13-year emergency room nurse and his army of volunteers have been using a crowd-funding effort to raise $10,000.

That’s enough to make and donate 6200 face shields and frames.

"I’m just very grateful to be able to make people feel safe," exclaims Luke Swanson, a 17-year-old volunteer from Greenfield. "Cos if you don’t feel safe at work, you’re not going to be able to do your job as well."

It was Luke who figured out a 3D program capable of making ten or more frames at one time.

"These are these little tabs between that go all the way around," he said while showing us one of the frames he designed. "When you finish printing it up, you can break it apart."

Behning saws the frames apart and smooths the edges off with a belt sander. He even has a contactless pickup on his front porch.

"We do them in batches of 15-30 for people that request through our Facebook page," he says.

But using a 3D printer is not a speedy process. It takes three hours to make each frame. After the frames are sawed apart, the shields are cut by hand from large plastic sheets.

"It’s kind of a fun project," said Behning’s wife, Lacey. "We can give back to the community and help give the PPE that people need right now."

Most of the shields— about 5500 of them— have been donated to health care workers.

The rest go to teachers, dentists, cashiers and other essential workers.

But increasingly, with more schools opening, the volunteers hope to help more educators, especially in the younger grades.

For the Behnings, with four kids now being schooled at home, teachers’ concerns are personal.

"With like the elementary students, they have to help them, and they’re closer to them, and a lot more exposure," Lacey said. "In kindergarten, how do you learn to read without being able to see your teachers’ lips move."

Behning says nobody makes a dime here. Donations for the program go directly into the shields.

"This is a way they can, you know, help fight on the front lines if they can’t be there with us," Behning said. "It takes about five dollars per shield to make, so it’s zero side costs."

Behning said he has gotten multiple requests from Special Ed Teachers and Speech Therapists and will stop making the shields only when there’s no longer a need.

Behning says if you want information about the program, you can go on Facebook or a search engine and look up "ICU shields MN."

"It’s a team effort. I wouldn’t be anywhere without the volunteers who are helping. I’d say they’re the real heroes," he said. "I’m just the one who noticed the issue and how to just be a productive answer to the problem that we’re all trying to face together."

Behning has set up a GoFundMe for people who want to help donate more funds to create more masks front liners. To donate, click here.