The team has been training at the National Sports Center in Blaine since October. It is the first time since 2010 that the team has trained in Minnesota.

A crowd full of family members, fans and local elementary students held signs and American flags outside the Super Rink, as the bus full of Olympians headed out Monday afternoon.

The team chartered a flight to Los Angeles, where they will receive their Olympic gear and do extra COVID-19 testing.

They will then fly to Beijing for the Winter Games on Thursday. 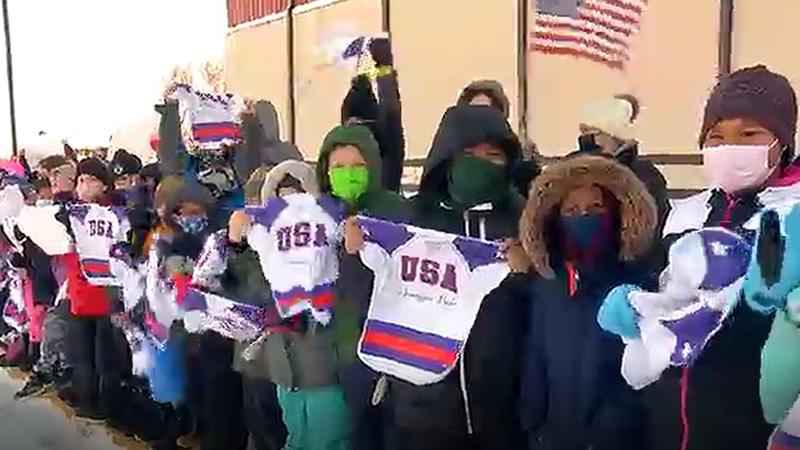 "This is what they all live for, the Olympics. It’s an opportunity for sure, a dream come true," said Jayne Rooney, mother of Maddie Rooney, an Olympian from Andover.

USA Hockey said Minnesota is the most represented state on the Olympic women’s hockey team this year, with six of their 23 players from Minnesota. Another three also went to college in Minnesota.

Many of the players’ parents joined Monday’s send-off, saying they are proud of all the hard work that has gone into preparing for the Games.

Dani Cameranesi’s mother Tess added, "I’m glad for the girls to be able to go and have fun and just win the gold."

Team USA Women’s Hockey are the defending gold medalists, after a 3-2 shoot-out victory over Canada in 2018.

Their parents said they wish they could be at the Winter Games with them but because of COVID-19 protocols, they will be cheering them on from home.

"Every time you go to the Olympics, it’s totally different and totally unique to itself. This is our experience this time and hopefully we can make the most of it. I think we will," said Linda Stecklein, mother of Lee Stecklein from Roseville.

"It’s incredible. It’s great to see these women be supported by the community. The fact that I’m crying all day means I must be pretty proud. It’s pretty awesome," said Molly Pannek, mother of Kelly Pannek of Plymouth.

USA Hockey told 5 EYEWITNESS NEWS the team has been trying to live in a ‘COVID bubble’ while preparing for the Winter Games, including getting curbside groceries and staggering their arrivals to the rink for training to avoid exposure to others.

A spokesperson said the team is 100% vaccinated, with no current cases of the virus.

Their first game is February 3rd against Finland, with puck drop at 7:10 a.m. central time.