The Derek Chauvin trial continued on Tuesday. Testimonies from multiple witnesses who were at the scene on May 25, 2020, all concluded into a mutual feeling: frustration, sadness and anger. Onlookers grew increasingly angry as they begged Minneapolis Officer Derek Chauvin to take his knee off George Floyd’s neck, but Chauvin would not let up.

The witnesses — a man, two juveniles, two 18-year-olds (who were underage at the time of the incident) and a firefighter/medic for the city of Minneapolis — described how Chauvin was unmoved by their pleas to help Floyd. The teenager who shot the viral video, Darnella Frazier, was among those who testified on Tuesday. She stated in court that Chauvin gave the crowd a "cold" and "heartless" stare while his knee was pressed against Floyd’s neck.

"He didn’t care. It seemed as if he didn’t care what we were saying," said Frazier, 18, one of several witnesses who testified through tears.

Chauvin continued to kneel on Floyd while former Minneapolis police officer Tou Thao held the crowd of about 15 back, even when one of the onlookers identified herself as a firefighter and pleaded repeatedly to check Floyd’s pulse, according to witnesses and bystander video. 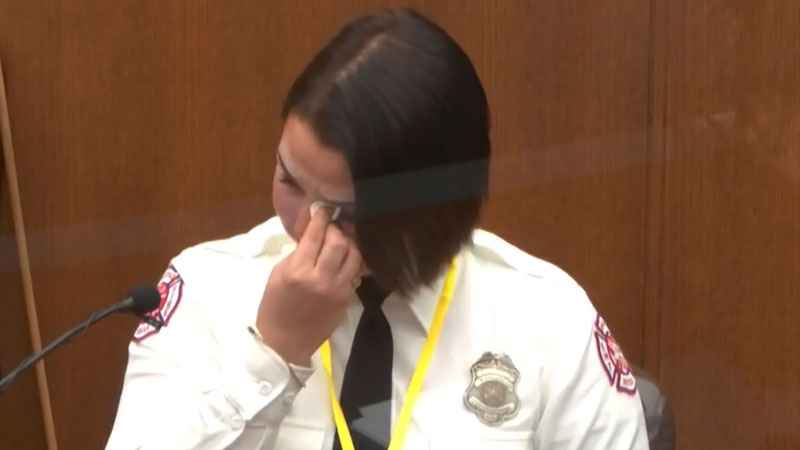 In this image from video, Minneapolis Firrefighter Genevieve Hansen, wipes her eyes as she testifies as Hennepin County Judge Peter Cahill presides Tuesday, March 30, 2021, in the trial of former Minneapolis police Officer Derek Chauvin, in the May 25, 2020, death of George Floyd at the Hennepin County Courthouse in Minneapolis, Minn.[Court TV via AP, Pool]

"They definitely put their hands on the Mace, and we all pulled back," Frazier told the jury. When Frazier was asked by a prosecutor whether she saw violence anywhere on the scene, she replied: "Yes, from the cops. From Chauvin, and from officer Thao."

Frazier also testified that she looks at her father and other Black men in her life and thinks of "how that could have been one of them."

Genevieve Hansen, the firefighter, teared up while on the witness stand as she recalled how she was not allowed to give any medical assistance or tell the police what to do, such as administering chest compressions because of their inactions.

"There was a man being killed," said Hansen, who testified in her dress uniform and said she had emergency medical technician training. "I would have been able to provide medical attention to the best of my abilities. And this human was denied that right."

Hansen testified that the crowd was getting more upset and that the paramedics did a "load and go"— placing Floyd on a stretcher and quickly getting him away from the crowd so he could be treated elsewhere. The firefighter will resume the witness stand Wednesday morning.

Two friends — both were not shown in court, per the court’s order earlier Tuesday morning — were visiting Cup Foods last Memorial Day to get some snacks when they saw the incident happen in front of them. Both of them are in high school. One of them, identified as 18-year-old Alyssa Funari, felt like she "failed," saying that she feels she could have done more to intervene.

"I felt like there wasn’t really anything I could do as a bystander," Funari said, adding that she felt she was failing Floyd. "Technically I could’ve did something, but I couldn’t really do anything physically … because the highest power was there at the time," she said, referring to the police.

Another child, who was identified as a nine-year-old currently in the third-grade, testified on Tuesday. The girl is a cousin of Frazier’s, who was at the scene that day of the incident. She told the court that she felt "sad and mad" about what happened. The defense did not cross-examine this witness.

Many testified about feelings of helplessness and guilt as Floyd gasped for air, pleaded for his life and finally fell limp and silent, his eyes rolling back in his head. The testimony was apparently aimed at showing that Chauvin had multiple opportunities to think about what he doing and change course. However, Chauvin’s attorney — Eric Nelson — sought to portray the bystanders as "angry" and "chaotic," in an apparent attempt to show that the crowd posed a potential threat to officers at the scene that might have distracted them during their encounter with Floyd.

Donald Williams, one of the onlookers, testified that he called 911 after paramedics took Floyd away, "because I believed I witnessed a murder." In a recording of the emergency call, Williams could be overheard yelling at the officers: "Y’all is murderers, bro!"

Williams was brought onto the stand on Monday before continuing Tuesday morning. During cross-examination, Chauvin’s lawyer pointed out that Williams seemed to grow increasingly angry at the police, taunting Chauvin with "tough guy," "bum" and other names, then calling Chauvin expletives, which the defense lawyer repeated in court.

Williams, a professional mixed martial arts fighter, initially admitted he was getting angrier, but then backtracked and said he was controlled and professional and was pleading for Floyd’s life but wasn’t being heard.

Williams said he was stepping on and off the curb, and at one point, Thao, who was controlling the crowd, put his hand on Williams’ chest. Williams admitted under questioning that he told Thao he would beat the officers if Thao touched him again.

Witnesses also testified that no bystanders actually interfered with police.

Chauvin faces up to 40 years in prison if he is convicted. The court will resume on Wednesday starting at 9 a.m.