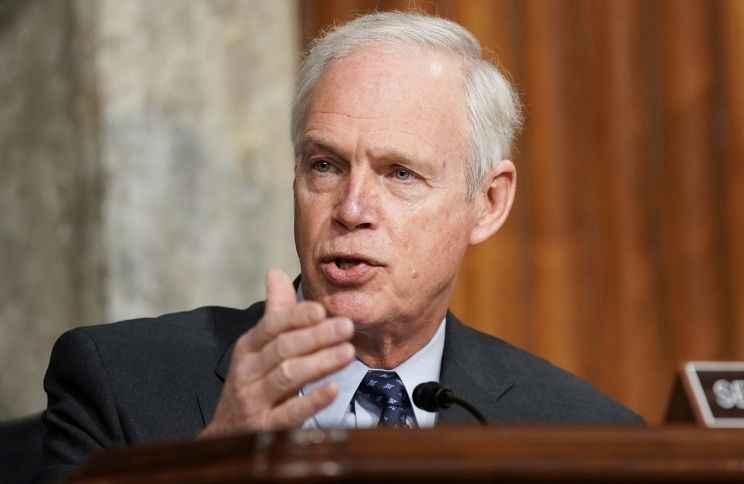 Sen. Ron Johnson, R-Wis., speaks at the U.S. Capitol in Washington, on March 3, 2021. Johnson, one of former President Donald Trump's most vocal supporters, has decided to seek reelection to a third term, two Republicans with knowledge of the plan told The Associated Press on Friday, Jan. 7, 2022. [Greg Nash/The Hill via AP, Pool, File]

Republican U.S. Sen. Ron Johnson of Wisconsin, one of former President Donald Trump’s biggest backers, announced Sunday that he will seek reelection in the battleground state, ending months of speculation about whether he would go for a third term.

Johnson announced his decision via email two days after a pair of Republicans with knowledge of his decision told The Associated Press that he was close to launching a bid. Johnson, 66, had long said his preference was to serve just two terms. He pledged in 2016 not to run for the third time, but he rescinded that promise and kicked around running again for months, saying circumstances have changed.

The race is sure to be one of the most hotly contested in the country next year in purple Wisconsin. President Joe Biden won the state by fewer than 21,000 votes in 2020 after a similarly narrow win by Trump in 2016. Johnson won by nearly 5 points in 2010, his first race for office, and then by just over 3 points in 2016. Both times he defeated Democrat Russ Feingold.

Johnson’s decision also has ripple effects on Wisconsin’s governor’s race. Kevin Nicholson, a former Marine who ran for U.S. Senate and lost in the GOP primary in 2018, has said he would run for governor if Johnson sought reelection. Earlier this week, former U.S. Rep. Sean Duffy bowed out of running for Senate or governor.

History is on Johnson’s side in the midterm election. The party that does not hold the White House generally gains seats in midterm congressional elections. Former President Barack Obama’s Democratic Party, for example, lost 63 seats in the House and six in the Senate in 2010.

Johnson, who rose out of the tea party movement in 2010, has long been aligned with Trump’s hardline policies and politics. The two have remained close following Trump’s defeat, with Trump in April endorsing Johnson for a third term and encouraging him to run.

Johnson was one of Trump’s loudest defenders in 2020, particularly after his election loss, and that support continued after the insurrection at the U.S. Capitol on Jan. 6, 2021. Johnson has espoused conspiracy theories related to the Capitol raid that attempted to shift blame for what happened away from Trump supporters.

Johnson has since downplayed the violence, saying it "didn’t seem like an armed insurrection to me."

Just before the U.S. Capitol was stormed a year ago, Johnson objected to counting the Electoral College votes from Arizona. Last year, he told Republicans who control the Wisconsin Legislature that they should take over control of federal elections. Republican Wisconsin Assembly Speaker Robin Vos told the AP on Friday that there is "zero chance" of the Legislature taking over the awarding of the state’s 10 presidential elector votes in 2024.

Johnson, who contracted COVID-19 in October 2020 and is not vaccinated, has cast doubt over the efficacy of vaccines and pushed for unproven treatments. Just last week, Johnson on conservative talk radio said, "Why do we think that we can create something better than God in terms of combating disease? Why do we assume that the body’s natural immune system isn’t the marvel that it really is?"