An Eau Claire family is celebrating a memorable Christmas this year. 15-month-old Opal Puchi Smith is having her first holiday season at home.

“She’s very brave,” said Eliza Smith, Opal’s mother. “She’s also remained so positive through all of this, she’s such a smiley baby and happy and it’s amazing for somebody who’s gone through as much as she has to have such a big smile on her face every day.”

Smith learned after her 20 week ultrasound that Opal was growth-restricted. Her daughter was born early at just 28 weeks.

“I was hospitalized in the cities in Saint Paul before she was born because things had kind of started to deteriorate with my placenta. The blood flow from my placenta to her was actually starting to gap and reverse,” said Smith. “Her heart rate was dipping, her oxygen was doing the same kind of all over the place and it just wasn’t safe for her anymore.”

Opal was delivered via C-section. She weighed just 1 lb. 3 oz. 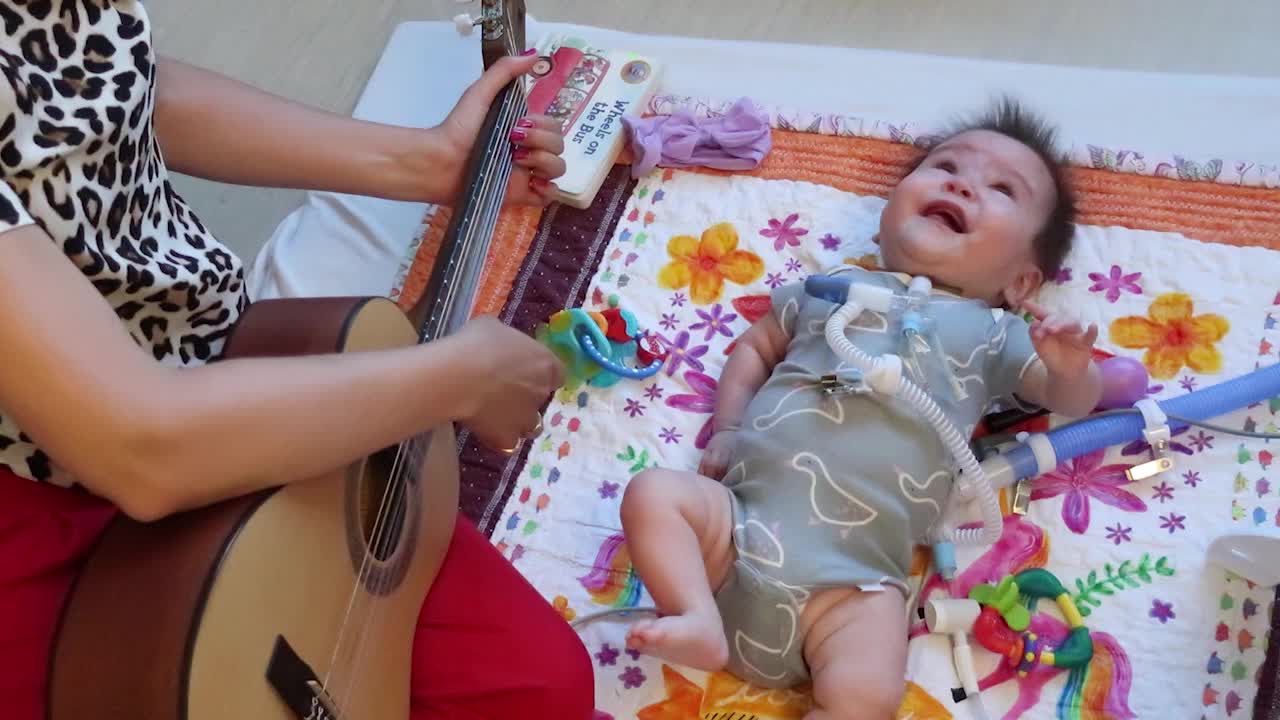 “It was scary, exciting, happy, a lot of emotions all at once when I first saw her,” said Smith.

Opal was treated in the Neonatal Intensive Care Unit (NICU). Her lungs were underdeveloped, which caused complications with breathing. She underwent a tracheotomy to place a tube to help her breathe when she was only about three months old, just a few days before Christmas.

In those overwhelming early weeks, Kayla Shafer brought soothing sounds to her side by singing and humming to her.

“Many of our patients do really need some extra calming and comforting relaxation and so when I first started working with Opal, many of our sessions did focus on that comfort and relaxation,” said Shafer, who is the manager of the Child Life Music Therapy Dept. at Children’s Minnesota.

“She was really tiny, she had this before she even had her surgery,” said Smith. “We’d noticed that she would calm down, her heart rate would settle and she would be in a state of peace and calm.”

As Opal grew and developed, her music therapy changed. Shafer used maracas, a steel drum, a colorful hand drum shaped like a lollypop, wind chimes, and a tambourine to help Opal with visual and audio tracking, and grasping.

Opal’s favorite instrument was the guitar.

“I would actually put it in her crib and she would reach out for the guitar and I would help her strum the strings or she’d put her feet on the body of the guitar and feel the vibrations in her body,” explained Shafter. “There’s lots of things to look at with the guitar, it feels different when she’s strumming the strings, plus the reward of the sound is extremely validating and you’d see her smile and light up. We know that all of those different elements that music can provide support babies’ growth.”

As the months passed, Opal saw music therapists two to three times a week. Shafer described her progress as “wonderful.”

“She would be in her stroller, playing instruments, grasping on her own, smiling,” said Shafer. “She just loved company.”

The music therapy appointments became a “light part” of Opal’s day, said Smith. It also alleviated her worries during Opal’s ongoing treatment as she traveled back and forth across state lines to be with her daughter.

“She lit up when they would come in the room,” said Smith. “Any bond she was able to make in the hospital was important because we didn’t always get to be with her every day. I valued that so much that she was able to spend some time with somebody she enjoyed.”

“It was surreal,” said Smith. “I couldn’t believe she was finally home.”

Their family is grateful for that gift this Christmas. Instead of preparing for surgery this year, she’ll be opening presents with her older brother. Smith said they bought her a music kit.

“We miss the hospital staff quite a bit,” she said. “We want to say Merry Christmas to everybody.”