At the Art’s House Gallery in River Falls, you’ll find sunflowers everywhere in the works of art on display.

A way to help Ukrainian children, traumatized by the war, raging on for more than five months now.

“As people in the Midwest, we don’t really know what to do, and you feel helpless, because we want to help,” gallery owner Kay Fritz says. “We think a painting or a card. We have cups with sunflowers, because that was the flower of hope. And that’s how it started.”

This month — the gallery has focused on an exhibition Fritz and her daughter Jill call ‘Stand With Ukraine.’

One of them is Cheryl Maplethorpe, who says she’s been deeply affected by the war, and Ukraine’s will to keep fighting.

“I was happy to be asked,” she says, pointing to one of her pieces on display. “This is a sunflower that is getting a little feisty and is burning. So that’s a symbol to me of Ukraine.” 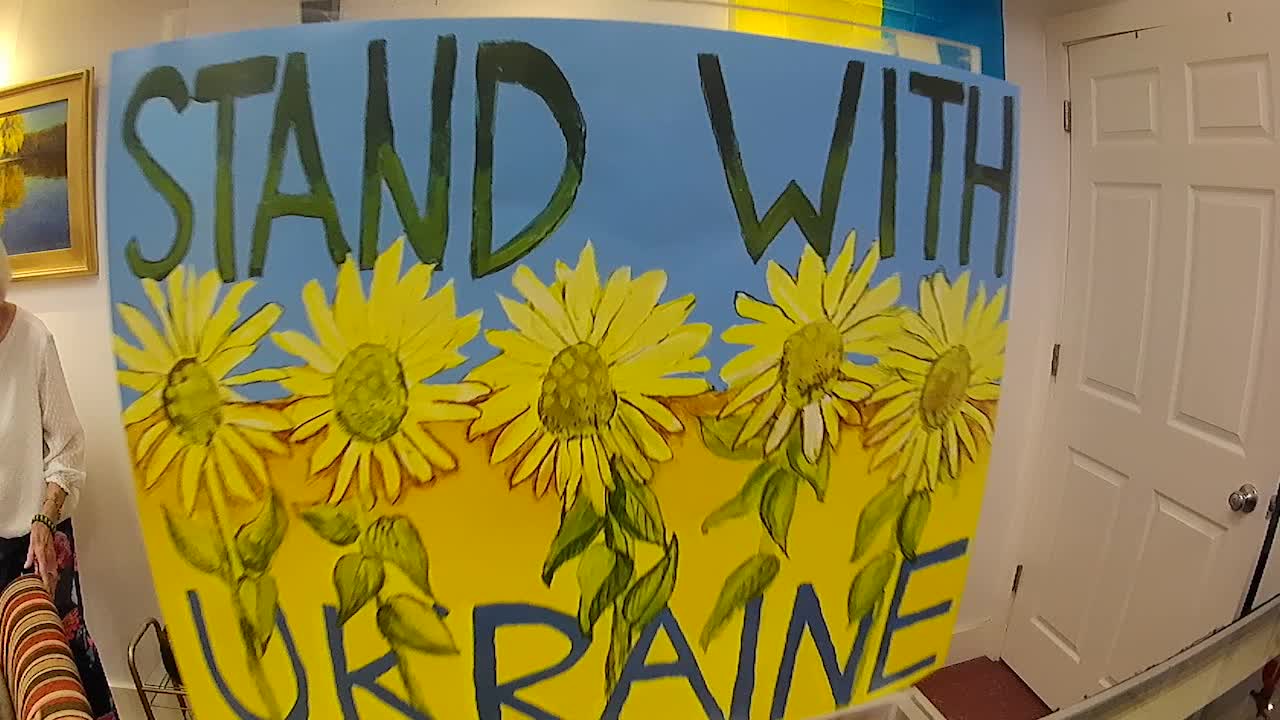 An art gallery in River Falls is on display to raise money for children suffering from the Russian invasion (KSTP).

Fritz says through media reports, she learned about a school in Montenegro, where 100 Ukrainian refugee children are taking classes taught by 20 refugee teachers.

She also got details about a summer camp for ten displaced Ukrainian kids — now set up in the Carpathian mountains.

“I am a retired elementary school teacher,” Fritz notes. “So helping children get to a school was very important to me.”

Fritz says she got in touch with Paul Gavrilyuk, a professor of theology at the University of St. Thomas, and the founder of “Rebuild Ukraine.”

Gavrilyuk says the St. Paul nonprofit has raised more than $20,000 to help fund both the school and the camp.

“I used to want to take all my class home with me and give them a shower, feed them, and hug them,” she explains. “That’s how I felt when I look at these children torn away from their families.”

Among those visiting the gallery Friday was Andrii Purtov, his wife Nataliia Purtova, and their nearly two-year-old son Mark.

“They’re trying to help the kids,” he says. “We really appreciate it.”

He shared video and photos of their damaged apartment block, in a city northwest of Kyiv.

“We woke up hearing the bombs and the place we were living was under the Russians during the next months,” Purtov recalls. “Russian soldiers were staying in our apartments and our houses and they destroyed almost everything.”

He says his young family moved to Hungary, then Romania and Bulgaria, before arriving in the U.S. — first in New York, then New Jersey, then finally River Falls in late May.

That’s where Tammy Smith, a mortgage loan officer in town, stepped in.

Even before the Purtov’s arrival, she started searching through social media, looking for a Ukrainian family in need.

“I posted on a Facebook website that I would like to help a Ukrainian family, and had several reach out to me,” Smith remembers. “When (the Purtovs) reached out, I just video chatted and felt an instant connection — and then we started the paperwork.”

Smith says she’s helped with the family’s relocation here — even hosting them at her house.

“I can’t imagine what they went through and just how happy they are now and knowing what they’re still going through with family there,” she exclaims. “It’s pretty remarkable.”

Smith says she hopes Purtov — who has also worked as a mortgage loan officer, and in the hospitality industry — can get his federal work permit in the next month or two.

He says he’d like his family to settle in River Falls.

“Not just happy, we’re very happy to be here,” Purtov says. “Really it’s a beautiful place, people are very good here. Really like it, we don’t want to move from River Falls.”

In this small art gallery — halfway around the world from Ukraine — two examples of kindness, helping, and hope — for dozens of Ukrainian children — and this newly arrived family.

“You know, it’s exciting, hopefully they get some stability and some kind of normalcy, which it’s not,” Fritz says.

“They didn’t do any wrong. They were just living their normal lives and all of a sudden, there’s bombs going over their house,” Smith adds. “Try to imagine, what if this happened in our country, and we needed to leave and needed another country to help us out, or somebody to help. I would hope that somebody would help.”

You can find out more about Art’s House Gallery here.