For the moment, the Minnesota State Fairgrounds are so quiet you can hear a single leaf blowing on a tree.

But in a just few months, the property will look much different — for 2 million reasons.

"Yes, we finally got some good news in the state of Minnesota," smiled Tim Weiss, owner of Giggles’ Campfire Grill.

Weiss learned Friday that the fair — canceled last year because of the pandemic — is a go for this year.

"People are going to be very anxious to get out, I think," said Kathryn Strand Koutsky, who’s written a book about the massive event. "They’re going to welcome the fair as a favorite place to do." 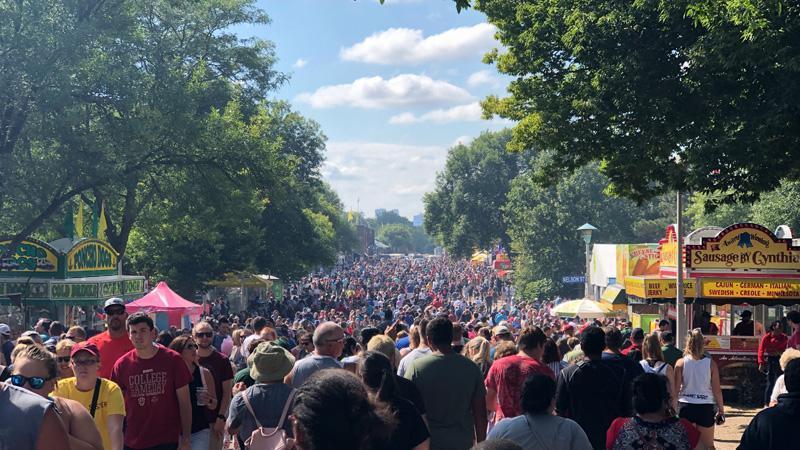 The State Fair Board on Friday approved a plan to open on Aug. 26 and operate for its normal 12-day run.

For many, it will be déjà vu, pre-pandemic style.

"It’s full speed ahead for the 2021 great Minnesota get back together," Jerry Hammer, the fair’s general manager told reporters.

Weiss is among the happiest at the fairgrounds.

"I think this year is going to be gangbusters," he said. "That’s a beautiful thing because I’ve been out of work for about a year and a half."

As he showed a KSTP crew around his restaurant, Weiss reflected on how he has survived in a pandemic year.

He acknowledged that gearing up this year, including hiring 250 temporary employees, will be a challenge.

"It probably takes us three to four days to get everything working precisely with the state fair crowds that begin in August," he said. "Like, we did a wedding last week for 165 people. Tomorrow, we’ve got a grad party for 250."

He’s not the only one giddy over the fair’s return.

"I’m so happy, and I’m looking forward to it," Koutsky said.

She described to 5 EYEWITNESS NEWS how she wrote her book about the fair with her daughter in 2007. It’s packed with historical photos.

"1853… that was the Minnesota Territorial Fair," Koutsky said, pointing to one section.

Tracing the fair to before statehood.

"So, people here love the fair," Koutsky explained. "I think because of the history of it and how far it goes back. And how much of the animals and the crops that finding new products, it gives them when they go to the fair."

And what about the crowds? And the projected 2 million attendees?

Weiss shared a story about one particularly busy day, with hundreds of hungry patrons waiting outside one of his walk-up windows.

"We were real busy, and they said the lines are out to the street, out to the curb," he recalled. "Not this curb, the curb across the street. They had to bring police officers to manage foot traffic up here, we were so busy."

There is, most would agree, something magical about the Minnesota State Fair. Something special.

"It’s a thing," Hammer said. "It’s so important to so many people. To be able to do that again is just outstanding news. We can’t wait for August."