‘We are so insanely lucky’: Family credits foster dog with saving them from house fire

A northern Minnesota family is crediting the family dog with saving their lives this week.

Devin Haegeman said his home in Nevis, near Park Rapids in Hubbard County, caught fire at 5 a.m. Wednesday. He, his wife, Hannah, and their four children were all asleep at the time.

He said he remembers waking up to a commotion in the hallway, with the sound of their dog, Gracie, barking outside their bedroom door. They had taken in Gracie as a foster dog about six months ago.

"I noticed it was smoky as I get out of bed. As soon as I opened our door, we knew it was an emergency immediately. We couldn’t see through the hallway," Devin Haegeman said.

Devin Haegeman said he jumped into action as he realized the house was on fire. 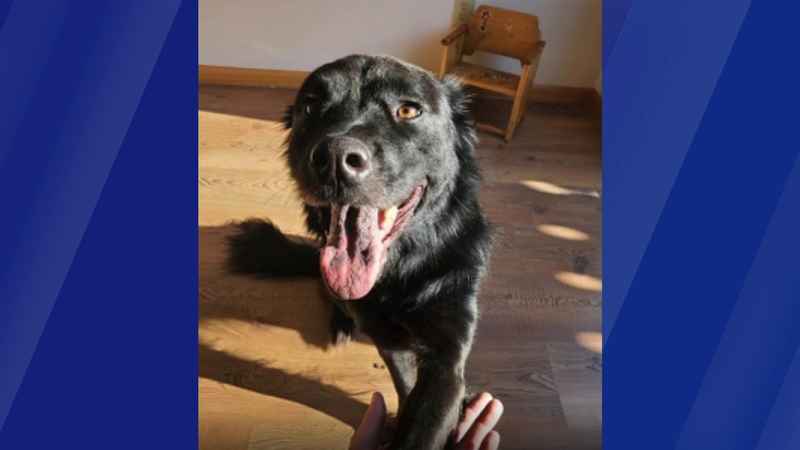 Devin and Hannah Haegeman said Gracie the foster dog's barking alerted them to a fire in their home just in time to get all their children out safely.[Courtesy photo]

He said he took notice of the time on the clock, saw that it was 5:01 a.m. when he woke up and rushed his wife and their 4-month-old daughter, Marcella, outside.

He said he then rushed in to try to find the other children, 4-year-old Maddox and 9-year-old Emily.

"When I finally got to Maddox, he was already awake and walking across his room trying to get out. He said, ‘Dad, it’s smoky.’ And I said, ‘I know. I’m sorry it woke you up.’ And he got really mad and said, ‘No, Gracie woke me up!’" Devin Haegeman recalled.

When the children were all safely outside, Haegeman said he frantically tried to find the dog, finally locating her underneath a bed and pulled her to safety as well.

"At 5:07, everyone was in the car. And by 5:09, when as the fire department was pulling in, the back door blew out, part of the wall collapsed and that entire section of the house just flashed. It was gone," Devin Haegeman said.

He said they never heard a smoke alarm go off.

The family credits Gracie with alerting them to the danger, just in time.

"Minutes different and it could have been devastating," Hannah Haegeman said. "If we had woken up two minutes later, we probably wouldn’t have been able to get to the boys’ room in time."

The whole family was taken to the hospital for smoke inhalation. They were all able to be discharged within a few hours and everyone is expected to be OK.

Now, they are trying to come to grips with the loss of their house, nearly all of their belongings, their children’s Christmas gifts and many sentimental items that cannot be replaced.

"The kids’ hospital bands from when they were born and my wedding dress were all in the closet and it’s all just melted together. We had afghans and different blankets that my grandparents who have passed had made," Hannah Haegeman said. "But it almost seems silly to focus on the material stuff we lost. We are so insanely lucky."

The family is temporarily living out of a motel while looking for a new place to call home.

They said they have been encouraged by the outpouring of support from family, friends and total strangers who have dropped off clothes, diapers and even Christmas gifts for the kids over the past few days.

"This is what the Christmas spirit is," Hannah Haegeman said. "People going out of their way to make sure our kids still have Christmas. It’s been an outpouring of everyone trying to help."

The family said they have a long road ahead, trying to find a new place to live and replacing all of their belongings. A GoFundMe page has been set up to help them.

The Haegemans said they decided to officially adopt Gracie, calling her an ‘exceptional dog’ and in this case a ‘superhero.’