Search warrants filed in the fatal police shooting of 20-year-old Andrew Tekle Sundberg sheds new light on the circumstances surrounding the hours-long standoff leading up to his death.

5 EYEWITNESS NEWS has also learned that attorneys Ben Crump and Jeffrey Storms will be representing the family of Sundberg.

Minneapolis police responded to the report of shots fired Wednesday evening at around 9:30 p.m. According to a search warrant, Minneapolis SWAT Team members had “two snipers set up observation from the roof of [the] apartment building” across the street from Sundberg’s apartment building.

A warrant indicates less-lethal rounds were used through the evening, and “officers used a PA system in [an] attempt to make contact with the subject.”

Investigators with the Minnesota Bureau of Criminal Apprehension filed the warrants. They were filed for Sundberg’s apartment as well as another unit in the same building.

“At some point during the standoff, the two snipers shot the male subject,” according to one search warrant. The subject was later identified as Sundberg, and the two officers who discharged their rifles were identified Thursday evening as Aaron Pearson and Zachary Seraphine. 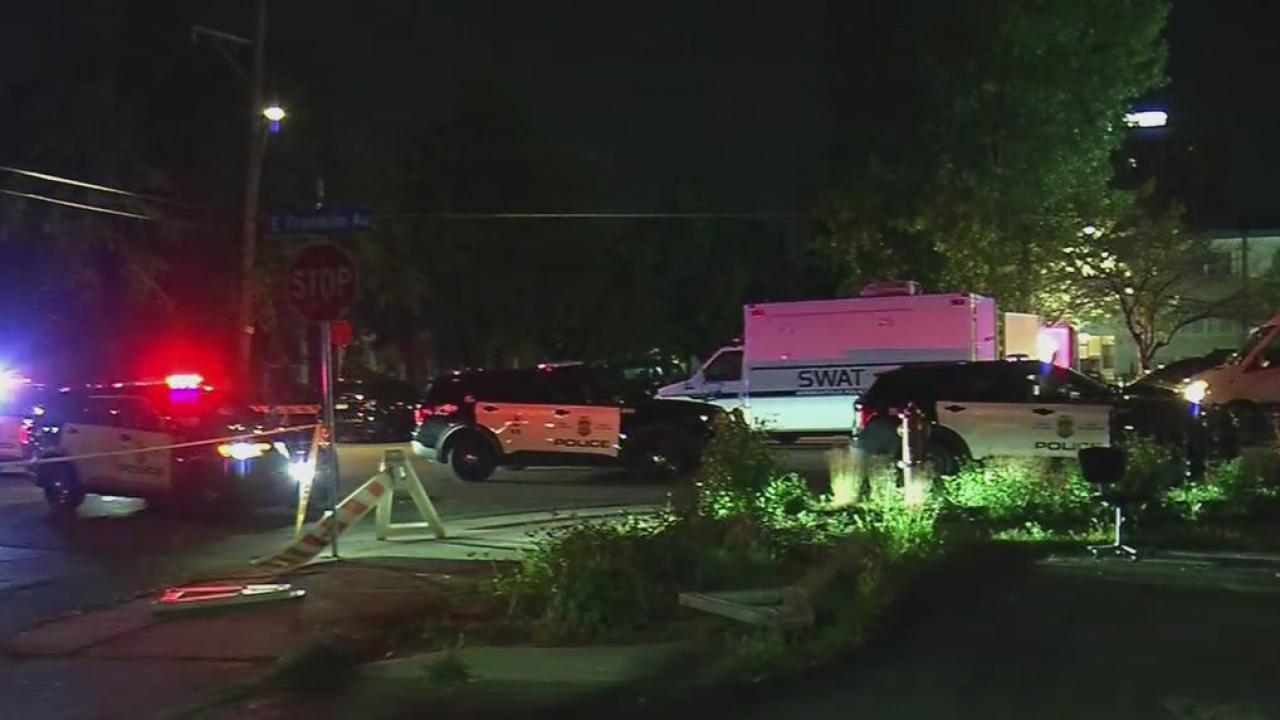 Minneapolis police in a standoff during the overnight hours from Wednesday, July 13 to Thursday, July 14. Credit: KSTP

It wasn’t immediately clear if both officers’ shots struck Sundberg.

BCA records show both Pearson and Seraphine were at the Bolero Flats apartment building in downtown Minneapolis as part of the SWAT team on the day Amir Locke was killed back in February.

A warrant also notes BCA agents observed “multiple bullet cartridges, both live rounds and spent, are in the hallway outside of the subject’s apartment, number 318, in addition to multiple apparent bullet holes in the walls, which appeared as though the subject was firing out from his apartment.”

“Current on scene investigation discovered an apparent bullet hole entering apartment 308,” a neighboring apartment, according to one warrant.

A spokeswoman for Mayor Jacob Frey said the city will not be releasing body-worn footage from the shooting on Friday.

The mayor had no comment on the BCA search warrants “as that is routine practice during ongoing BCA investigations.”

“First and foremost, we want the world to know that Tekle was deeply loved and that his family and friends are beyond shocked and grieving from these horrific events. Tekle was a son, brother, grandson, uncle, nephew, and friend. He was smart, loving, funny, and kind. He had many artistic talents, including photography and painting. Tekle was a deep, soulful, critical thinker who drew strength and energy from being outside and gazing across the river. He never missed a good sunset. From the time he fixed a stapler for his preschool teacher, we knew Tekle to be capable of fixing anything – furniture, snowblowers, and his grandfather’s riding lawn mower. He had the strength and courage to challenge bullies and stand up for the most vulnerable, but also had the innate sensitivity to be capable of loving everyone and everything from plants to his beloved cat, Cali.

“Like millions in America and worldwide, Tekle struggled with his mental health. While we have received very little information thus far, by all accounts, it sounds like our Tekle was suffering from a mental health crisis. We send our deepest sympathies to anyone in his building impacted by his crisis, and we thank the community members who have come forward in loving memory of Tekle.”

“The family has been given very little information about why Tekle’s mental health crisis became a death sentence. His family rejects the public narrative that the Minneapolis Police Department’s efforts were done in close collaboration with his family. His parents were highly restricted in terms of their ability to interact with Tekle and were not allowed to do everything they could to save their son’s life.

“The narrative released by the City of Minneapolis is unclear as to what specifically precipitated the shooting, stating, “After approximately 6 hours of attempted negotiations, an officer-involved shooting occurred…” No information has been provided as to why Tekle, who officers had isolated for hours, suddenly needed to be executed. We call on the Minneapolis Police Department to immediately provide the family with the video evidence and other information necessary to answer this question.”