This was not your ordinary weekend block party.

Some of downtown Minneapolis’s busiest thoroughfares — including sections of Hennepin Avenue and First Avenue — were shut down to make them more pedestrian friendly.

All part of a pilot project to draw people into the warehouse district, near Target Center. 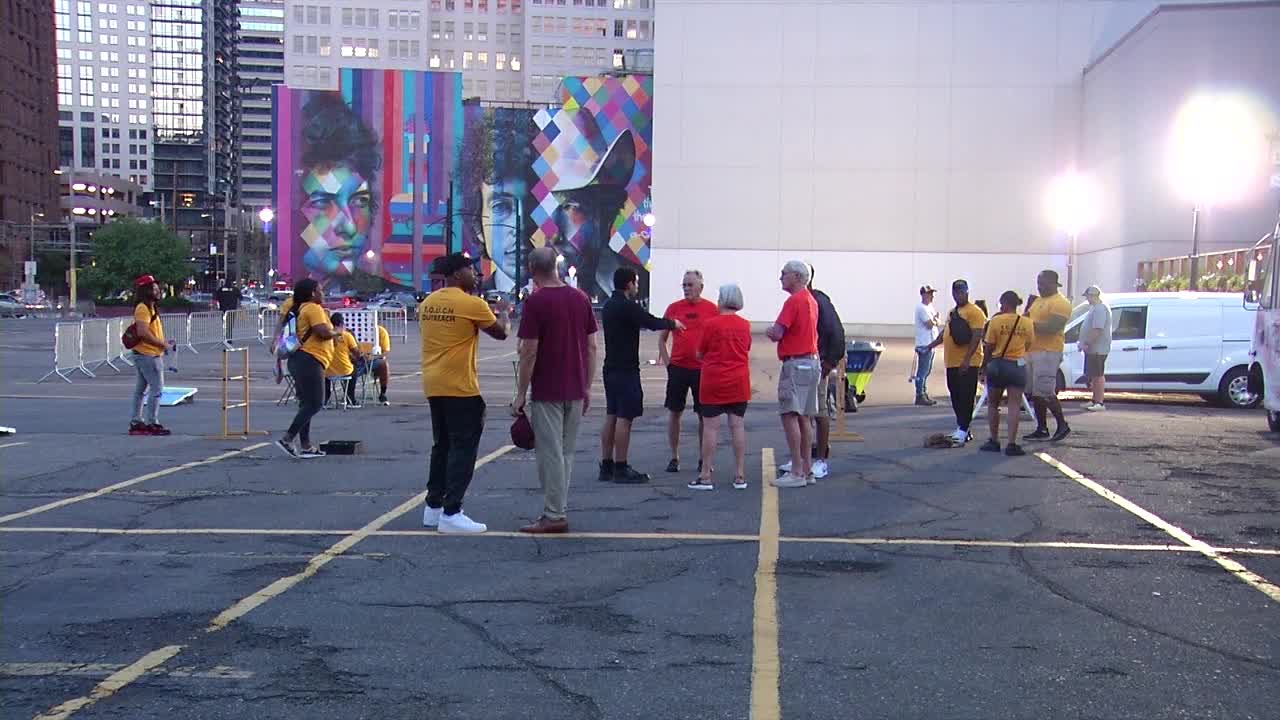 Volunteers and attendees at the Warehouse District Live event (KSTP).

It was designed to encourage people to check out bars, restaurants and other venues — and to get to know the neighborhood.

“I like it, I like the concept of it,” says John Maxton, of Fridley — who brought his whole family. “We’ve always liked downtown, so we always come here when we have a date night or anything like that so I understand what they’re doing.”

A parking lot along Hennepin Avenue was converted into a giant social gathering area, with a big screen TV, games and other amusements.

“This idea they’re having in the parking lot is a first step,” he says. “It’s like okay, we’re creating an atmosphere which is fun and safe and clean.”

Organizers say when they previously set up the event, they partnered with the Minneapolis Police Department, Mad Dads and private security to make sure things went smoothly.

“We know that the number one thing that makes people feel safer is the presence of other people,” Shardlow says. “So if we can create a high quality pedestrian environment, we know people will come down and have a good time.”

Nearby businesses say they hope the idea could be the start of something bigger.

Dani Rauton — the general manager of Kieran’s Irish Pub says with big events like a Vikings or Twins game, or a major concert — she might have 400 to 500 customers on her patio.

But on a non-event evening, she might see 50 people come in.

Rauton says the game day numbers are great — but adds her customers want to feel safe.

“It is a huge challenge and it’s very very sad because the rest of us pay the price,” she says. “I mean when people don’t want to come down here, and don’t want to hang out and spend money and whatnot.”

Shardlow says Minneapolis Downtown Council wants to try another “live” event in October — this time, on a game day or when other big events are happening.

For Mahoney — it’s a start.

“This is more about going forward, doing stuff for the next year, see how the logistics, how it’s all handled,” he says. “Make people feel comfortable to be down here — this is okay, you’re walking around, a lot of people here, it’s safe, we’ve got some activities here, and it’s a good day to enjoy it. Why wouldn’t you be in downtown Minneapolis?”