Minnesota Gov. Tim Walz and his Republican challenger Dr. Scott Jensen debated Tuesday night on television, but residents in the Twin Cities were only able to watch through online streams.

The panel of four journalists asked questions on a bevy of issues, including abortion, the state’s response to riots after George Floyd’s murder and the Feeding Our Future fraud investigation.

Walz and allied groups have used the abortion issue as their main area of attack on Jensen, claiming he will seek to ban abortion in Minnesota if he’s elected governor.

In campaign videos and media interviews, Jensen said he would ban abortion, but he has walked back that rhetoric in the wake of the U.S. Supreme Court’s decision to overturn Roe v. Wade, leaving abortion laws in the hands of state legislatures. 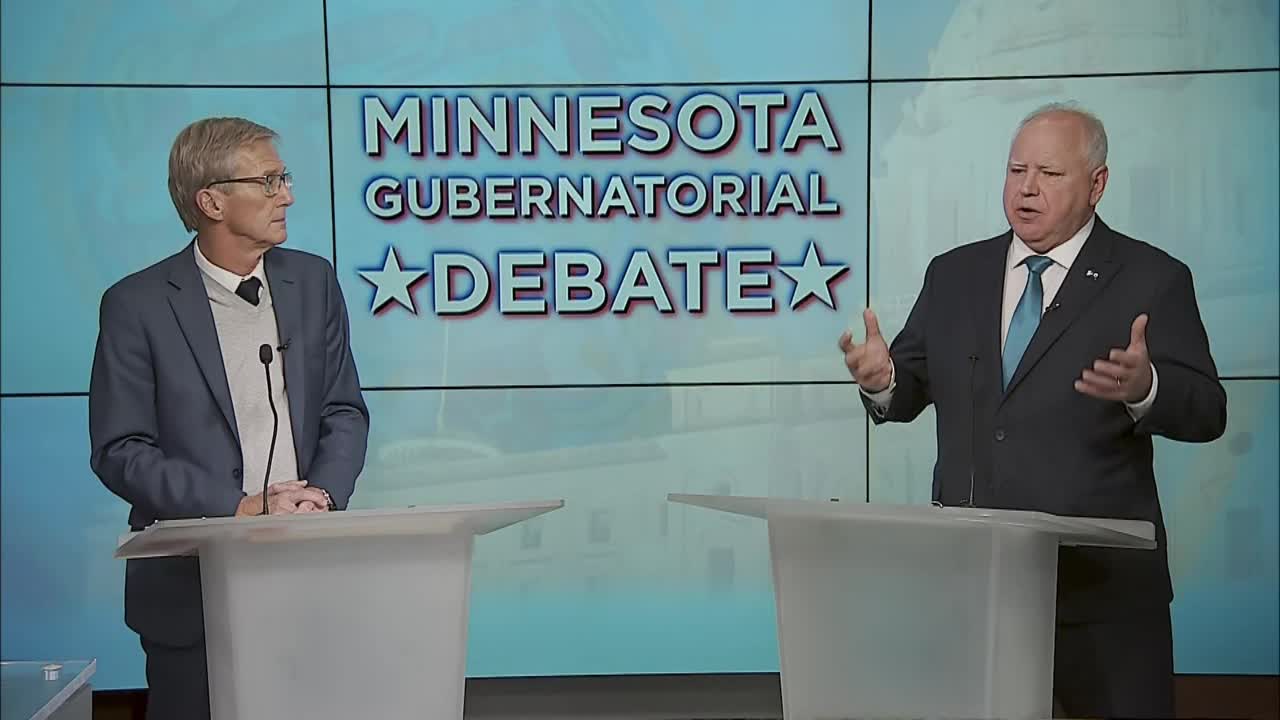 In his response to Jensen’s answer, Walz criticized Jensen for changing his stance mid-campaign.

“Scott was very clear in May. He mocked me and said, ‘No kidding, Sherlock, I’m running for governor to get things done. We’re going to ban abortion, that’s not news,” Walz said. “That changed after Roe versus Wade. I think what most of us know again you heard this through many different places, this is not about trusting women. This not about clear convictions. It’s about changing your positions as the winds blow.”

The moderators also asked the candidates about the state’s response to riots that erupted in the Twin Cities following George Floyd’s murder. Walz and Jensen were asked what they would do differently if something similar happened again, but they mostly talked what happened in 2020.

“Nothing like this had been seen before — the level of violence after the murder of George Floyd,” Walz said. “I think, again, there will be stories written and this will be written about for quite some time. I’m proud of Minnesota’s response. I’m proud of Minnesota’s first responders who were out there from firefighters to police to National Guard to citizens that were out there.”

Jensen took the question as an opportunity to put Walz’s support of first responders in doubt.

“You heard it here: Governor Walz just told you, ‘I am proud of Minnesota’s response,’ referring to the riots of May and June of 2020. Wow,” Jensen said. “This isn’t a one-off situation. There’s a reason the Minnesota Police and Peace Officers Association has endorsed me unanimously.”

The candidates also addressed the $250 million Feeding Our Future fraud investigation. Jensen claimed Walz could have stopped the scheme much sooner.

“Governor Walz and his team could have stopped this anywhere along the line,” Jensen said. “But when it was getting warm in the kitchen for Governor Walz because basically, it appears there’s a cover-up. Two questions are huge on all of our minds. What did Governor Walz know and when did he know it?”

For his part, Walz said state and federal agencies alike needed to do better to enforce the rules for how public funds are disbursed.

“During COVID the federal government relaxed some of their rules and they sent out as they should have aid to states in terms of uprecedented numbers,” the governor said. “Now, making sure those safeguards are in place? Absolute priortiy. Once the Minnesota Department of Education found this, they alerted the FBI. Now it’s an ongoing investigation. I guess we’ll get more clarity once they start to come to that.”

When given a chance to respond, Jensen doubled down, laying the blame squarely on the Walz administration.

“You just heard a smokescreen. This is not about the federal government, this is about the state of Minnesota, and the Office of the Legislative Auditor should have been notified,” Jensen said.

The two also tangled over the budget bill that stalled in the Legislature in May.

Walz said Jensen urged Republican senators to block the bill that would have delivered tax cuts and rebates, but Jensen said it also would have increased state spending by billions of dollars.

Lack of debates under scrutiny

The one-hour debate between the 2022 candidates for Minnesota governor was hosted in Rochester and was only broadcast on Greater Minnesota TV stations. It was the second of three scheduled debates between Walz and Jensen but the only one to be televised.

“Tim Walz is ahead, but he’s not a prohibitive favorite,” says Carleton College political analyst Steven Schier. “He’s probably ahead in the single digits, probably the high single digits but that is not safe territory three weeks out.” Schier says although minimizing the number of debates is clearly strategy of the Walz campaign, it doesn’t mean it will work. Although he says Jensen needs the debates more than Walz. “The two of them need to meet face-to-face in order for Jensen to try and close that gap because the further away Walz is from Jensen personally in this race the better it is for Walz.”

The only other time Walz and Jensen debated was eleven weeks ago at Farmfest near Redwood Falls on August 3. That was only seen by a few hundred people who attended the debate and people who saw highlights on television or online.

This will be the first time in at least 40 years the candidates for Minnesota governor will not debate in prime time on Twin Cities television. The only other debate currently scheduled is at noon, Friday, Oct. 28 on Minnesota Public Radio.

KSTP-TV will host a “Debate Night in Minnesota” that will air statewide in prime time on Sunday, Oct. 23. Walz declined to participate, so Jensen will face questions from a panel of reporters by himself. The major party candidates for attorney general and secretary of state have all agreed to participate.