Vikings rally to force OT at Cincy, but lose opener 27-24

Evan McPherson kicked a 33-yard field goal as time expired in overtime to push the Cincinnati Bengals to a 27-24 win over the Minnesota Vikings on Sunday.

The game-winning kick was set up by a gutsy call. On fourth-and-inches for the Bengals from their 48, Burrow rolled out and hit tight end C.J. Uzomah in stride for a 32-yard gain and get McPherson well within his range. McPherson added a 53-yard field goal early in the fourth quarter.

Cincinnati’s Germaine Pratt recovered Dalvin Cook’s fumble to set up the winning drive for Cincinnati. Minnesota challenged the ruling that Cook had fumbled, but it was upheld after a replay review.

Greg Joseph kicked a career-long 53-yard field goal as time ran out in the fourth quarter to tie the game for Minnesota, which had battled back from a 21-7 second-half deficit. 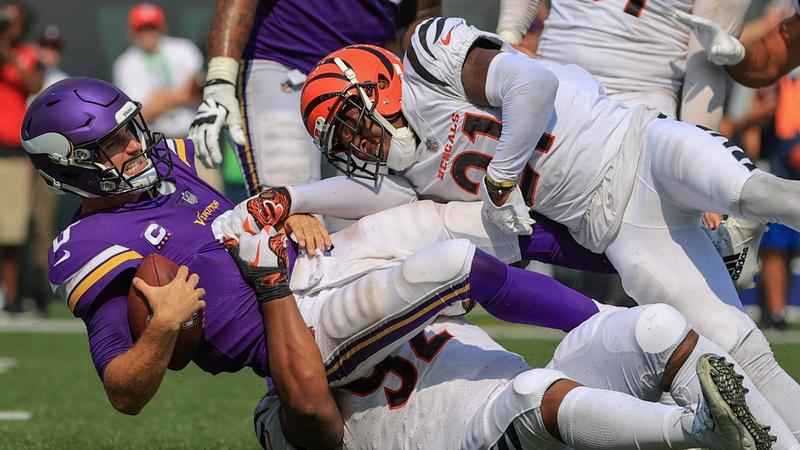 Burrow threw for 261 yards and two touchdowns in his return after major knee surgery nine months ago, and rookie Ja’Marr Chase had 101 yards on five receptions, including a 50-yard scoring pass from his former LSU teammate.

Burrow, who flashed his considerable potential last season before tearing up his left knee in Week 11, completed 20 passes on 27 attempts and didn’t show any residual effects from being sacked five times by the Vikings. The 24-year-old played only one series in the preseason, in the final game, as he continued to rehab.

Cincinnati running back Joe Mixon, making a return from a foot injury that sidelined him much of last season, rushed for 127 yards and had a 2-yard touchdown plunge in the third quarter.

Kirk Cousins passed for 351 yards and two touchdowns to Adam Thielen for the Vikings.

Vikings: At Arizona on Sunday.

Bengals: At Chicago on Sunday.