The Minnesota Vikings have been trying to craft under new coach Kevin O’Connell a diverse and unpredictable offense that can still succeed when their best players are taken away.

Lessons from a lopsided loss a week earlier led to a more complete and sound performance on Sunday — capped by a stadium-rocking, last-minute rally.

K.J. Osborn caught the go-ahead, 28-yard touchdown pass from Kirk Cousins with 45 seconds remaining, and the Vikings came back to beat the Detroit Lions 28-24.

Leading by three after Minnesota turned the ball over on downs at its 47 with 2:32 left, Detroit coach Dan Campbell — who went for it on fourth down six times — elected to try a 54-yard field goal that he second-guessed himself for afterward. Austin Seibert pushed the kick wide right with 1:10 remaining.

“I wanted to score a touchdown. I wanted to win this football game in front of our fans in regulation, put maximum pressure on those guys,” O’Connell said. 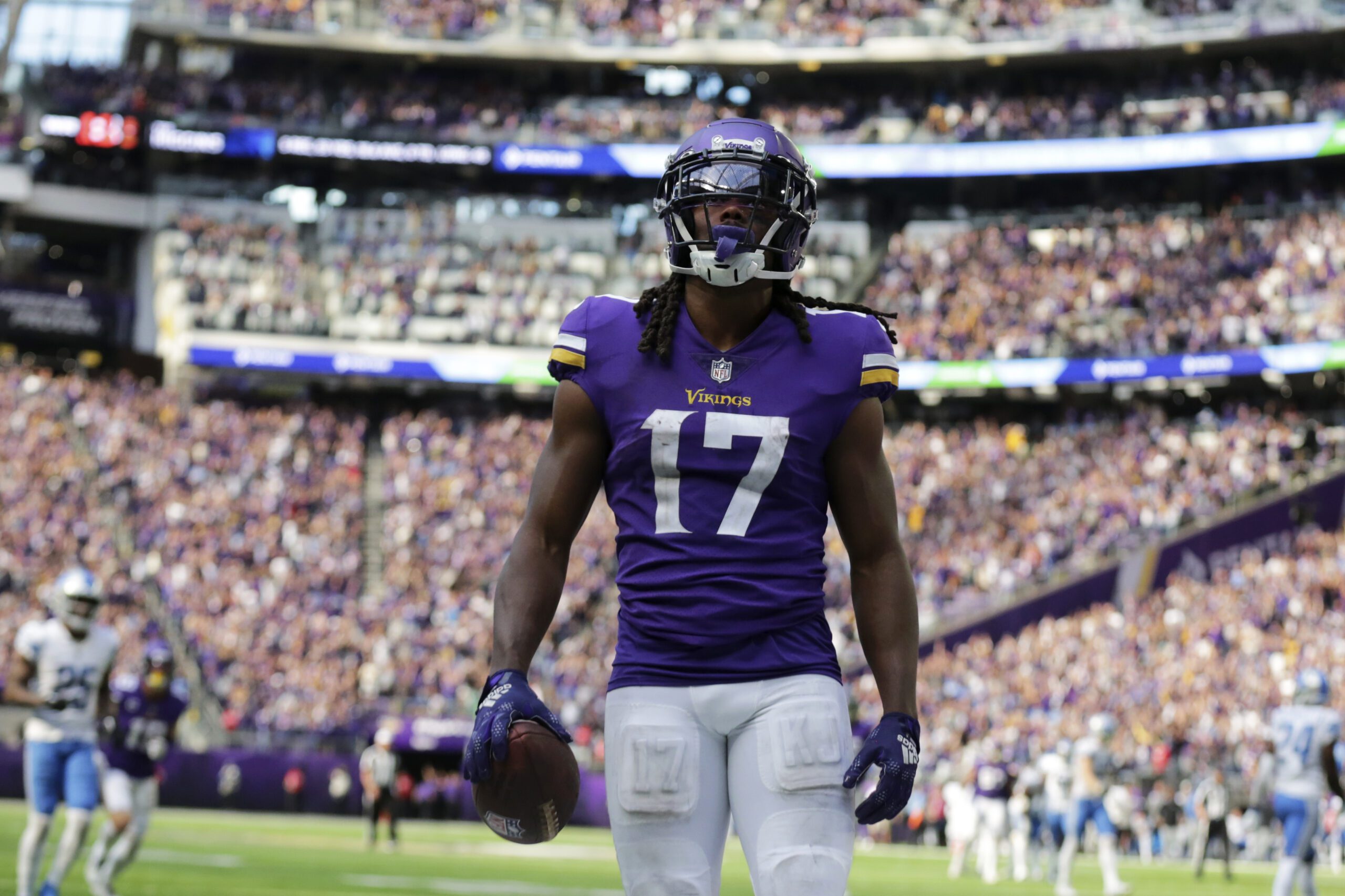 Minnesota Vikings wide receiver K.J. Osborn (17) celebrates after catching a 28-yard touchdown pass during the second half of an NFL football game against the Detroit Lions, Sunday, Sept. 25, 2022, in Minneapolis. (AP Photo/Andy Clayton-King)

After an incompletion to Osborn, Cousins hit his No. 3 wide receiver for a 28-yard gain to set up the touchdown. Osborn blew by former Vikings cornerback Mike Hughes on a corner route to snag the pass in stride and cruise across the goal line to give Minnesota (2-1) the lead for the first time.

“That’s something that’s expected of every single one of us. All of us are playmakers. All of us have that talent to really win in this league,” said Justin Jefferson, who was constantly double-covered by rising Lions star Jeff Okudah and a safety and had just three catches for 14 yards.

Campbell said there was miscommunication in the secondary on the winning TD.

“We had our chances. We played some pretty good football for a while,” Campbell said. “I told the team, ‘When the downs come, we’ve got to handle it with composure. And when the ups come, we have to capitalize.’ We didn’t capitalize enough when we were on the ups.”

As Osborn and Jefferson flapped their arms to fire up the crowd while standing on the bench, the Vikings didn’t let Jared Goff and the Lions cross midfield on their last-ditch drive.

“That game should have been over long before they were able to get back in it. I’m sure they know that. But we let them back in it, and that’s our fault,” said Goff, who was 25 for 41 for 277 yards.

Dalvin Cook rushed for 96 yards and a score before leaving with a shoulder injury for the Vikings, who fell behind 14-0 and 24-14 before the rally that gave them a winning record at the end of September for the first time since they were 3-0 in 2016.

“We’re a resilient team. We got it going, and when it counted we got it done,” Osborn said.

With Jefferson bottled up, Osborn (five catches for 73 yards) and Adam Thielen (six catches for 61 yards) caught touchdown passes from Cousins. With Cook sidelined, Alexander Mattison took over in the backfield and scored on a 6-yard run midway through the fourth quarter.

“With the group of guys we have, we’re never out of it,” Mattison said.

Jamaal Williams had 20 carries for 87 yards and two touchdowns for the Lions, who gave limited action to D’Andre Swift after he was listed as questionable with an ankle injury.

After going 3-13-1 in Campbell’s first season, Detroit (1-2) looks like a much more dangerous opponent. The Lions are still seeking their first road win since Dec. 6, 2020, at Chicago, though. Their NFL-record streak of starting a season with a touchdown in 11 straight quarters ended inconveniently in the fourth.

Amon-Ra St. Brown’s streak of eight straight games with at least eight receptions, tied for the longest in league history, was stopped. His run began last Dec. 5 in the win over Minnesota. St. Brown had six catches for 73 yards. T.J. Hockenson caught Goff’s only touchdown pass.

With his 1-yard catch that put the Vikings on the board midway through the second quarter, Thielen became the fourth undrafted player since the Super Bowl era began in 1967 to reach 50 career touchdown receptions. Antonio Gates, Rod Smith and Wes Welker were the others.

Thielen gave Amani Oruwariye all kinds of trouble. The Lions cornerback was called for six penalties. One was declined after a 15-yard catch by Thielen right after the fourth-down stop on Williams. Oruwariye appeared to get away with another one, when a fourth-and-8 throw by Cousins to the sideline was off target.

Lions: S Tracy Walker (ankle) left on a cart in the first quarter and didn’t return. Campbell said the team fears he has an Achilles injury. … With LG Jonah Jackson (finger) out for a second straight game, Dan Skipper started in his place.

Vikings: S Harrison Smith (concussion) was held out, giving Josh Metellus his first career start. He intercepted a desperation heave by Goff at the 5-yard line to seal it with 9 seconds left.

Vikings: Play New Orleans in London next Sunday. It’s considered a home game for the Saints.