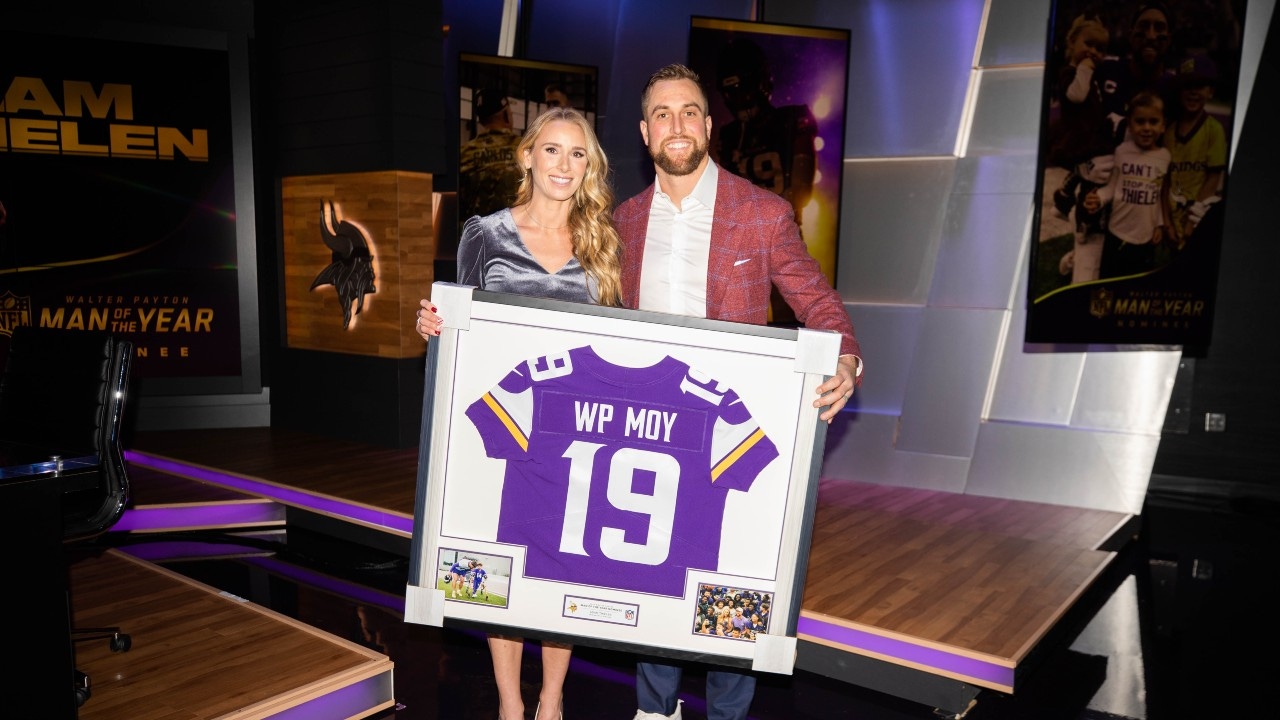 Vikings wide receiver Adam Thielen is up for this year's Walter Payton Man of the Year award due to the work of he and his wife, Caitlin, with the Thielen Foundation. Credit: Minnesota Vikings

Minnesota Vikings receiver Adam Thielen will be among those competing for this year’s Walter Payton Man of the Year award.

Thielen, as well as his wife Caitlin, created the Thielen Foundation in 2018 after he entered the league in 2013. The Vikings say the foundation has donated more than $2.5 million, and also invested time and resources into communities. In addition, the Thielen Foundation pledged a $1 million donation to eight nonprofit organizations in Minnesota, including Northside Achievement Zone, Masonic Children’s Hospital, Nexus-Gerard Family Healing and V3 Sports.

“Adam and Caitlin’s commitment and willingness to give back and serve Minnesotans through the Thielen Foundation is truly inspiring,” Vikings owner and president Mark Wilf said in a statement. “We are proud of Adam for the impact he has made on the community and he is the best representation of what the Minnesota Vikings should stand for. We cannot thank him enough for his commitment to the organization, to the Twin Cities and to the entire state of Minnesota. He’s extremely deserving to be our 2022 nominee for this impressive honor.”

The award goes to the player who shows excellence on and off the field.

This year, the award recipient will be announced the Thursday before the Super Bowl on NFL Honors. All 32 nominees will receive a $40,000 donation in their name to their charity of choice.

Whoever wins will receive a $250,000 donation to a charity of their choice.

Thielen also sounded off on the nomination, issuing the following statement in a news release announcing he was up for the award:

“It’s such an honor especially when you’re voted on by your peers and teammates. It’s just o cool to have them vote me for this award and not only me but also my wife, our foundation and what we’re trying to do. The greatest thing about it is the guys who are voting for it, are also the guys who are helping me out at a lot of these events to raise money to help this community as much as we possibly can. It makes it that much more special when your teammates are nominating you for the award and I am so thankful to be named the Vikings 2022 Water Payton Man of the Year.”

Fans can participate in a separate charity challenge by voting on Twitter. To do so, use the hashtag #WPMOYChallenge and a nominee’s Twitter handle, or last name. Whichever of the nominees has the most unique mentions between De. 6 and Jan. 18 will be able to contribute $25,000 to a charity of their choice.