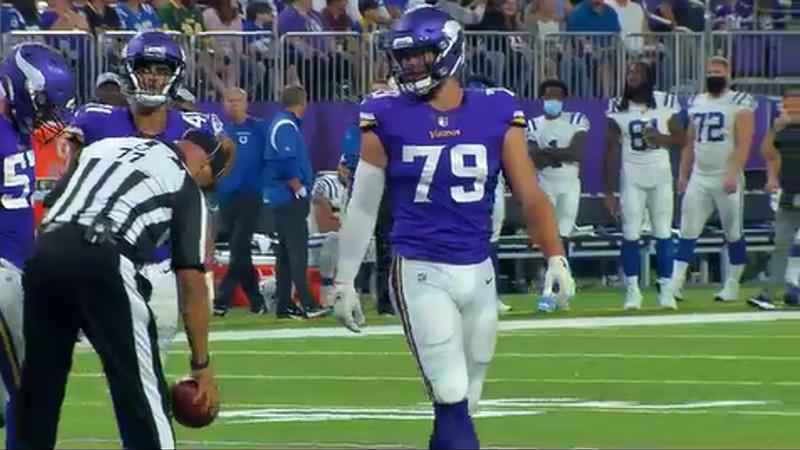 Kenny Willekes (79) of the Vikings moves before a play in a game against the Indianapolis Colts.[KSTP/File]

Another member of the Minnesota Vikings has been placed on the Reserve/COVID-19 list.

To take his spot on the active roster, the team said it signed defensive end Eddie Yarbrough, who has had previous stints with the Vikings and the team’s practice squad. He appeared in four games for Minnesota in 2020 but was most recently with the San Francisco 49ers earlier this year, although he didn’t play in any games.

The other players on the Vikings COVID-19/Reserve list are Garrett Bradbury, Dakota Dozier, Harrison Smith, Ryan Connelly and Timon Parris. Head coach Mike Zimmer said Wednesday that one of those players, who sources confirmed to KSTP Sports as Dakota Dozier, was hospitalized with COVID-19 symptoms on Tuesday night. KSTP Sports’ Darren Wolfson reported Friday that Dozier is improving but remained hospitalized Thursday night.

Told #Vikings OL Dakota Dozier is improving. That’s the good news. But as of last night, remains in the hospital. Scary stuff.