US regulators give full approval to Pfizer COVID-19 vaccine

The U.S. gave full approval to Pfizer’s COVID-19 vaccine Monday, a milestone that could lift public confidence in the shots and spur more companies, universities and local governments to make vaccinations mandatory.

The formula made by Pfizer and its German partner BioNTech now carries the strongest endorsement from the Food and Drug Administration, which has never before had so much evidence to judge a shot’s safety.

More than 200 million Pfizer doses have been administered in the U.S. — and hundreds of millions more worldwide — since December. But up to now, they were dispensed in this country under what is known as emergency use authorization from the FDA.

"The public can be very confident that this vaccine meets the high standards for safety, effectiveness and manufacturing quality the FDA requires of an approved product," acting FDA Commissioner Janet Woodcock said in announcing full approval, which comes as the U.S. battles the most contagious coronavirus mutant yet, the delta variant. 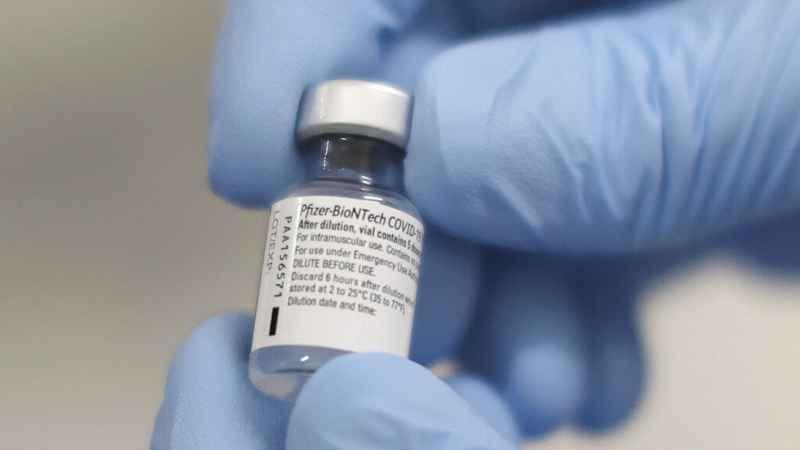 A vial of the Pfizer-BioNTech COVID-19 vaccine at the Royal Victoria Hospital, in Belfast, Tuesday Dec. 8, 2020. The United Kingdom, one of the countries hardest hit by the coronavirus, is beginning its vaccination campaign, a key step toward eventually ending the pandemic.[AP/ Liam McBurney]

Pfizer CEO Albert Bourla said in a statement he hopes the decision "will help increase confidence in our vaccine, as vaccination remains the best tool we have to help protect lives." The shot now will be known in the U.S. by the brand name Comirnaty.

U.S. vaccinations bottomed out in July at an average of about a half-million shots per day, down from a peak of 3.4 million a day in mid-April. As the delta variant fills hospital beds, shots are on the rise again, with a million a day given Thursday, Friday and Saturday.

Just over half of the U.S. population is fully vaccinated with one of the country’s three options, from Pfizer, Moderna or Johnson & Johnson.

“The FDA’s approval of Pfizer’s COVID-19 vaccine is exciting news. This vaccine is safe, it’s saving lives, and now it’s fully approved,” said Minnesota’s Governor Tim Walz. “Today’s action gives Minnesotans additional assurance that the Pfizer vaccine is safe and effective. Along with vaccines from Moderna and Johnson & Johnson, these are the best tools we have in our fight against COVID-19. If you haven’t yet, now is the time to roll up your sleeves and get your shot.”

Moderna has also applied to the FDA for full approval of its vaccine. J&J said it hopes to do so later this year.

Full approval means Pfizer’s COVID-19 vaccine meets the same "very high standards required of all the approved vaccines we rely on every day," said Dr. Jesse Goodman of Georgetown University, a former FDA vaccine chief. That should help "anyone who still has concerns gain confidence" in the shots.

"Mandating becomes much easier when you have full approval," said Dr. Carlos del Rio of Emory University. "I think a lot of businesses have been waiting for it."

This month, New York City, New Orleans and San Francisco all imposed proof-of-vaccination requirements at restaurants, bars and other indoor venues. At the federal level, President Joe Biden is requiring government workers to sign forms attesting that they have been vaccinated or else submit to regular testing and other requirements.

Anxious Americans increasingly are on board: Close to 6 in 10 favor requiring people to be fully vaccinated to travel on airplanes or attend crowded public events, according to a recent poll by The Associated Press-NORC Center for Public Affairs Research.

The delta variant has sent cases, deaths and hospitalizations soaring in recent weeks in the U.S., erasing months of progress.

"For weeks we have watched cases go up at an alarming pace among individuals who are not vaccinated while the vaccinated are largely protected," said Dr. Tomas J. Aragon, director of California’s public health department. "If you are not vaccinated, let this be the milestone that gets you there."

The FDA, like regulators in Europe and much of the world, initially allowed emergency use of Pfizer’s vaccine based on a study that tracked 44,000 people 16 and older for at least two months — the time period when serious side effects typically arise.

That’s shorter than the six months of safety data normally required for full approval. So Pfizer kept that study going, and the FDA also examined real-world safety evidence in deciding to fully license the vaccine for people 16 and older, those studied the longest. Pfizer’s shot still has emergency authorization for 12- to 15-year-olds.

Even after hundreds of millions of shots, government tracking shows serious side effects remain very rare, such as chest pain and heart inflammation a few days after the second dose, mostly in young men.

As for effectiveness, six months into Pfizer’s original study, the vaccine remained 97% protective against severe COVID-19. Protection against milder infection waned slightly, from a peak of 96% two months after the second dose to 84% by six months.

Those data came before the extra-contagious delta variant began spreading, but other data from the Centers for Disease Control and Prevention shows the vaccine is still doing a good job preventing severe disease caused by that mutant.

As for all the talk about booster doses, the FDA’s licensure doesn’t cover those. The agency will decide that separately.

The FDA already is allowing emergency use of a third dose of either the Pfizer or Moderna vaccine for people with severely weakened immune systems, such as organ transplant recipients or cancer patients. For everyone else who got those vaccinations, the Biden administration is planning for boosters starting in the fall, if the FDA and CDC agree.

Also still to be decided is vaccination of children under 12. Both Pfizer and Moderna are studying youngsters, with data expected in the fall.

All COVID-19 vaccines are free, and readily available at hospitals, pharmacies, clinics, and other health care providers around Minnesota. Visit vaccines.gov to find a vaccine location near you and to sort by vaccine type.