Willy Joseph Cancel — is being remembered this weekend, as the first American civilian to die while fighting alongside Ukrainian troops.

Lindquist, a U.S. Air Force veteran who served in Afghanistan — is now running a humanitarian aid effort in Lviv.

He spoke with us about Cancel’s death, and the choice to fight in a foreign war.

“I think this is a reminder to everybody back home that this is war, and it’s not something to be taken lightly,” Lindquist says. “Because in war, people die. And certainly, this is the time to honor his service and his commitment to freedom.”

He joined the Marines after graduating from high school. 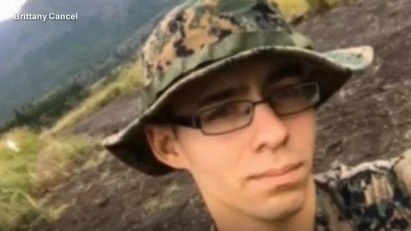 Willy Joseph Cancel, a US Marine Corp veteran who died while fighting in Ukraine (Photo Courtesy of Brittany Cancel).

Cancel’s wife tells ABC News he was killed Monday, while working as a military contractor.

It’s unclear where the 22-year-old lost his life.

Family members say his body has not been found.

“It’s a war zone,” White House Press Secretary Jen Psaki later added. “It’s an active war zone, and we know Americans face significant risks, but certainly we know a family is in mourning. A wife is in mourning and our hearts are with them.”

The administration is also advising Americans to stay out of Ukraine.

“We know people want to help,” Psaki says. “But we do encourage Americans to find other ways to do so, rather than traveling to Ukraine to fight there.”

Those records also show he was convicted by a military judge of violating a lawful general order.

Cancel was given a bad conduct discharge.

Lindquist says he disagrees with the administration — he says he believes more Americans are needed in Ukraine, whether in a humanitarian or military role.

He says combat is not something to be taken lightly.

“Being an American here matters to people,” he declares. “If you’re considering the decision, my opinion, you have to talk to somebody on the ground. It doesn’t have to be me, but it has to be somebody who’s been here in Ukraine and knows what’s going on.”

The Russian government says those volunteers should be ‘prosecuted as criminals’— without protections as prisoners of war under the Geneva Convention.

“While I admire the motivation, there’s certainly reason for great caution in actually directly fighting the Russian forces,” says Kathleen Collins, a political science professor at the University of Minnesota. “If you want to help, one way would be to deal with the refugee flow, perhaps work across the border with NATO support in terms of training and delivering aid, rather than actually engaging in combat with the Russian forces.”

Experts say American volunteers in foreign combat, would not be considered part of any official U.S. military campaign.

Federal laws say it is not illegal for U.S citizens to engage in a foreign conflict.

Lindquist says after arriving in Poland and Ukraine, he had considered a more active role — he is trained in using military firearms — but lacking any combat experience, he decided he’d be more useful doing humanitarian work.

“In my assessment, after talking to folks on the front lines, my training doesn’t back up that kind of decision,” he explains. “I don’t think that’s cowardly, I don’t think that’s any knock on my character. You have to know what you’re getting into, and I take it seriously. I don’t want to get my battle buddy killed.”

Cancel’s wife says her husband felt his mission in life was to ‘help.’

He most recently worked as a corrections officer in Tennessee, until this past January.

Family members say the 22-year-old signed up with a contractor shortly before the fighting started in Ukraine in late February.

They say Cancel had hopes of becoming a New York City police officer or firefighter.

For his part, Lindquist says he’s inspired by encounters with ordinary people — like a woman from Poland, who spoke to him on the street.