An 18-year-old student opened fire during a fight at his Dallas-area high school on Wednesday, injuring four people and then fleeing before being taken into custody hours later, authorities said.

Timothy George Simpkins was taken into custody without incident, the Arlington Police Department tweeted. He was booked in the Arlington jail on three counts of aggravated assault with a deadly weapon and was being held on $75,000 bail.

One person was in critical condition, another was in good condition and a third person was treated for minor abrasions and was scheduled to be released from the hospital later Wednesday, police said. A fourth person was hurt but did not require treatment at a hospital. Police said earlier that three of the four injured were students.

The shooting at Timberview High School, which is in Arlington but belongs to the school district in neighboring Mansfield, stemmed from a fight that broke out in a classroom, Arlington Assistant Police Chief Kevin Kolbye said at news conference before Simpkins’ arrest. 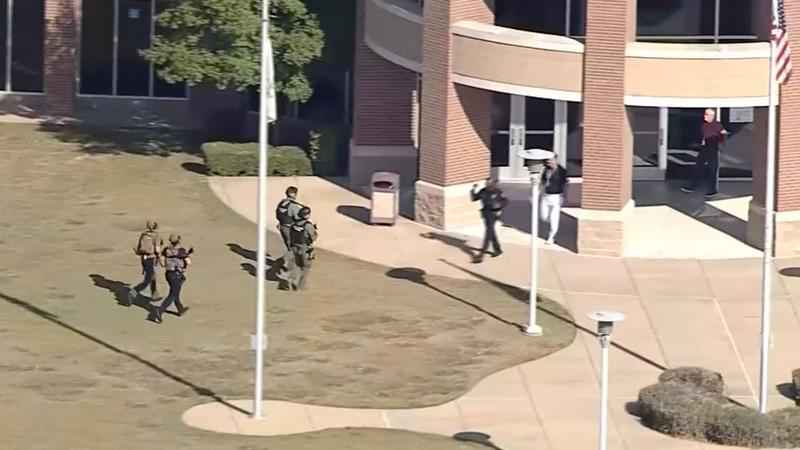 In this image from WFAA-TV video, law enforcement arrives at Timberview High School on Wednesday, Oct. 6, 2021 in Arlington, Texas. Authorities say a student opened fire inside the Dallas-area high school during a fight.[WFAA-TV]

"This is not a random act of violence," he said. "This is not somebody attacking our school."

A spokeswoman for Simpkins’ family said he had been bullied and robbed twice at school.

"The decision he made, taking the gun, we’re not justifying that," said family spokeswoman Carol Harrison Lafayette, who spoke to reporters outside the Simpkins’ home while standing with other relatives. "That was not right. But he was trying to protect himself.

The federal Bureau of Alcohol, Tobacco, Firearms and Explosives is investigating how the suspect got a gun. Local police from other nearby jurisdictions, including the cities of Mansfield and Grand Prairie, assisted Wednesday.

Student Hanyla Milligan said she first got word of the shooting when she heard a commotion.

"Someone outside of my classroom said, ‘He just shot him," the 16-year-old Milligan said, and then she heard people running. "People were scared. They was crying. They was shaking."

After news of the shooting spread, hundreds of parents gathered at the Mansfield Independent School District Center for the Performing Arts about 5 miles (8 kilometers) from the high school to be reunified with their kids, who were bused over. Among them was Justin Rockhold, whose ninth-grade son had texted to let him know he was OK.

Rockhold said he has served in the military and he drew on that experience to instruct his son, telling him to keep his head down and be still to stay safe. When asked whether he had thought a shooting could happen at the school, he said his military training is also a reminder of life’s dangerous realities.

"Obviously in America — in the world we live in today — it’s always something. … It’s in the back of your mind," Rockhold said, adding that he was praying for the injured. "I’m just blessed today that my kid’s safe."

Timberview serves about 1,900 students in the ninth through 12th grades. The sprawling complex opened in 2004.

Arlington, with a population of about 400,000, is a major suburb of the Dallas-Fort Worth area. The city is home to attractions including the Six Flags Over Texas amusement park and the stadiums where the NFL’s Dallas Cowboys and MLB’s Texas Rangers play. Authorities closed a section of a tollway in Arlington near Timberview as dozens of school buses picked up students to reunite them with their parents. Some waited for hours to collect their children as traffic in the area crawled.

The shooting Wednesday happened just days after a shooting at a Houston charter school that injured an administrator. Texas’ deadliest school shooting occurred in May 2018 when a 17-year-old armed with a shotgun and a pistol opened fire at Santa Fe High School near Houston, killing 10 people, most of whom were students.

An earlier version of this story was corrected to reflect that the suspect’s last name is Simpkins, not Simpkin.


This is developing news. KSTP is working on confirming more details.