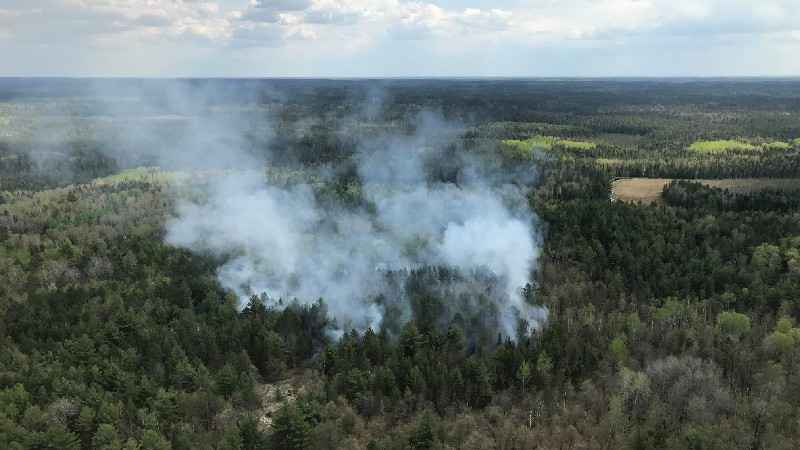 Smoke is seen as a wildfire burns in the BWCAW on May 18, 2021.[U.S. Forest Service - Superior National Forest/Facebook]

A fire burning in the Boundary Waters Canoe Area Wilderness has been reduced to 950 acres.

The USDA Forest Service had earlier estimated it at 1,635 acres on Tuesday evening but later reduced its size, saying fire activity and smoke had made it difficult for managers to make an estimate on size. It had been estimated at 10 acres on Monday evening.

The Forest Service says lightning started the fire in the BWCAW’s Trout Lake unit on Monday afternoon in an area away from any travel routes. It’s burning west of Big Moose Lake, north of Cummings Lake, and about 16 miles north of Tower.

Authorities said a wildfire that is believed to have been started by a lightning strike in the Boundary Waters Canoe Area Wilderness (BWCAW) grew to over 1,600 acres in size Tuesday afternoon.

According to the U.S. Forest Service – Superior National Forest, the fire was detected Monday afternoon northwest of Bezhik Lake within the Trout Lake unit of the BWCAW, and was estimated to be seven to 10 acres in size. On Tuesday, it grew to around 1,635 acres in size, aided by a south wind.

Officials said the fire made a large push north toward Moose Loop Road, and crews were dropping water from aircraft all afternoon to battle the blaze.

The forest service said a fire suppression plan is being developed. One big challenge is firefighter access, officials said. Evaluations on where to put firefighters and when it’s safe to do so are in progress.

Smoke will be noticeable in the area for at least a couple days, according to the forest service.

Further updates are expected at a later time.