Union members, volunteers reach million-pound mark in food distribution to those in need

Call it a drive-through of hope.

"Putting food on families’ tables is really important right now," said Kera Peterson, the president of the St. Paul Regional Labor Federation. "One in nine Minnesotans and one in six Minnesota kids are experiencing food insecurity as a result of the pandemic."

And so, on Saturday afternoon, an alley in St. Paul Park was converted into a free food distribution center.

Union members and volunteers unloaded and passed out 1,300 boxes of fresh food, each one weighing about 30 pounds. 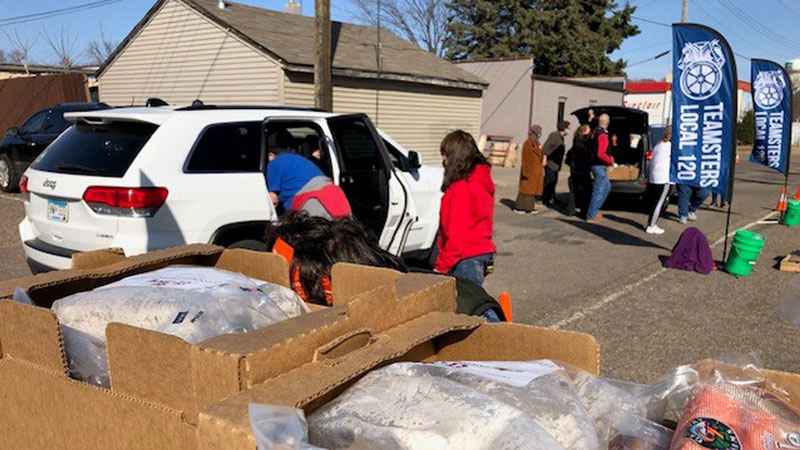 For many, taking part in giving food to those in need is an emotional event.

"You know prior to COVID, there was a need — and then the bottom fell out for a lot of people," says Erica Dalager Reed, a food broker who works with distributors nationally and locally to secure truckloads of food.

"People are living weekly with food insecurities and food shortages, and we have volunteers that go and will take boxes to them, some gallons of milk. And you’ve never seen a more grateful group of people."

The group says it has seen a 30% increase in demand at its warehouses, and that 60% more people are seeking help from its food shelf partners.

"If they’re forced to figure out the rent or the mortgage, and also come up with money for food, it could be really challenging for a lot of families," Peterson says.

The federation’s non-profit arm, the St. Paul Labor Studies and Resource Center, is sourcing the food through a special U.S. Agriculture Department program.

The USDA says it has purchased up to $6 billion of fresh produce, dairy and meat products from American producers.

Those resources are sent out to food banks and community organizations.

"Taking a grocery bill or two off of someone’s table to give them the opportunity to put their money somewhere else — to fix a tire, to take care of their kids — it’s the least we can do," Reed says.

The giveaways have become a weekly event in St. Paul Park, but the federation has also held distribution events in Minneapolis, St. Paul, Mankato, Little Canada and elsewhere.

On Sunday, the union will be hosting a giveaway at Sheet Metal Workers Local #10 on Cope Avenue in Maplewood.

But Saturday marked a special event: a delivery truck had the foundation’s millionth pound of food loaded on it.

"I think this is amazing," exclaimed Robert Forsyth, of St. Paul Park. "I think helping, I’m giving it to my neighbors that are older people, just helping them out."

Some here were collecting for their families. But many were trying to help neighbors who might otherwise go hungry.

"It’s kind of hard because they can’t get to work," says Sonya Duke, from Burnsville. "Some of them are older people and they can’t work, so I help them out the best I can."

The effort Saturday began around 1:30 p.m.

"I think that’s great," smiles Kristin Marlitt, from Cottage Grove, who picked up a few boxes for her son. "Anytime you can help others, that’s wonderful."

You can find out more about the food distribution effort here.