What makes a house a home?

For Sharon and Mark Norlander of Brooklyn Park, it’s all about the smiles of a family they’re sponsoring, playing in their backyard on a leafy Minnesota afternoon.

“Just seeing their progress, it’s amazing,” adds Sharon Norlander. “Seeing their hopes and their dreams and their horrible story.”

A story about a young Ukrainian refugee family: Vadim and Luibov Holiuk, both 33; and their three girls, Alisa and Anastasia, 11-year-old twins; and Anita, who’s almost 2. 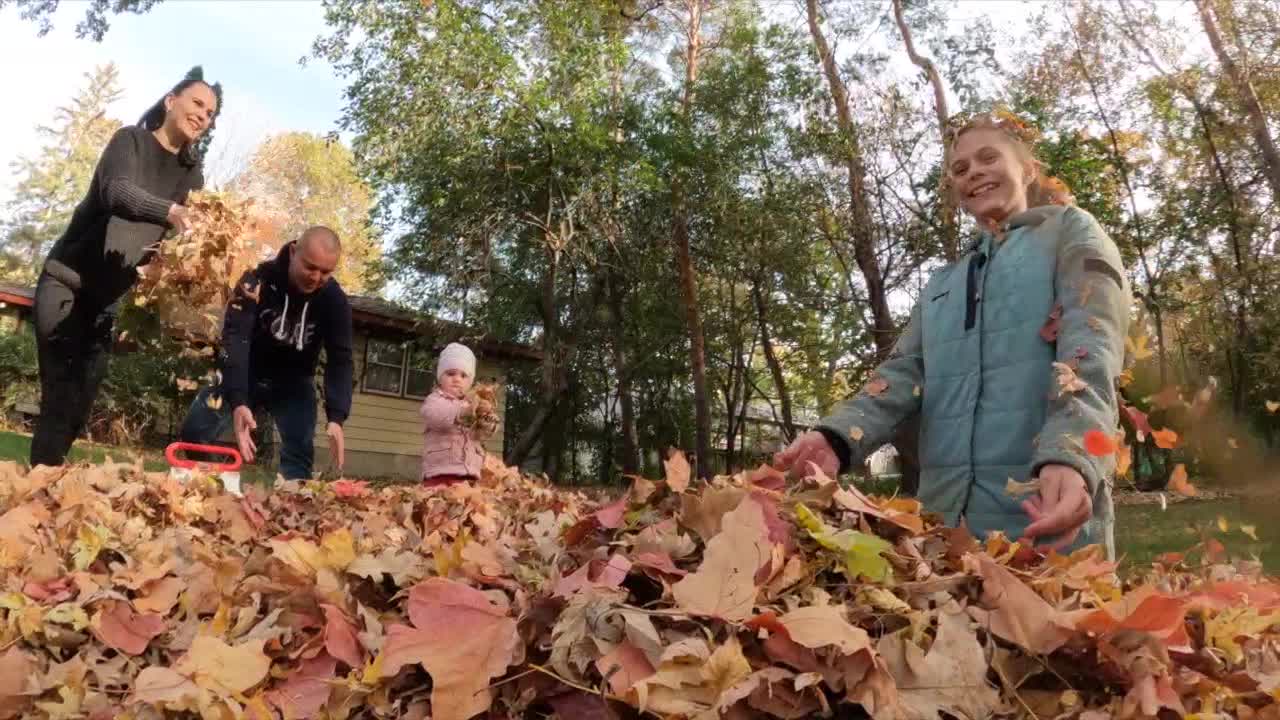 The Holiuk family, who are Ukrainian refugees, play in a pile of leaves in their sponsor family's backyard. (KSTP)

They fled their home in eastern Ukraine back in the spring.

“I am here, I am safe, my family is safe,” Luibov Holiuk declares.

But it wasn’t an easy decision, the couple says.

“Many people from Ukraine leave Ukraine and stay in Europe and it’s very difficult for Ukrainian people,” Vadim Holiuk says.

“He said the girls were seeing the planes go over and the bombs falling and that they were crying constantly, and he knew he needed to do something,” Sharon Norlander adds. “That’s when they got on a train and left their home and had no idea where they were headed or where things would end up.”

The Holiuks joined thousands of others fleeing east to Poland by train, staying several months in Warsaw before connecting with Alight, a Minneapolis-based global humanitarian nonprofit.

Alight partners with a third-party website that connects refugee families with sponsors — groups or families willing to host those families here in the U.S.

“This is the pathway for people to find safety and for people to start a new space in the United States,” says Steph Koehne, an Alight spokesperson. “It’s a big commitment because you’re there as that first entry point, that first connection point. You’re greeting somebody at the airport, you’re helping them have their kids enrolled in school, helping them to navigate the job market.”

In September, the Holiuks arrived at Minneapolis-St. Paul International Airport. They were the very first Alight-sponsored Ukrainian refugee family to arrive in Minnesota.

The group says they have a goal of assisting 100 Ukrainian families, helping them to move here.

“We think of the United States as a very good country for us, and for our children,” Vadim notes.

The Norlanders will sponsor the family for at least several more weeks, giving them a temporary home, sharing meals and establishing a fond friendship.

“It’s the kind of thing that will challenge you,” Mark Norlander says. “It may inconvenience you and upset your schedule a little, but in a greatly rewarding way.”

But in recent days, with Russian forces attacking Ukraine’s infrastructure — including its power grid and using drones to attack civilian targets — the Holiuks worry about family still there, especially with winter approaching.

“We were worried about our family staying in Ukraine,” Vadim Holiuk says. “In Ukraine, very cold temperatures in the Donetsk region where we live. Don’t have gas and they have only electricity.”

He explains most people in that area use gas for cooking.

Meanwhile, Vadim Holiuk says he’s not sure if his family will return to Ukraine.

He notes they speak with relatives, including two grandmothers every day.

Vadim Holiuk adds he wants to find work. He’s an electrical engineer, and Luibov is also an engineer, but there’s a three-month wait for federal government work permits.

The twin girls are planning to start attending school next week in Champlin.

“They are happy because they are free,” Vadim Holiuk exclaims. “This place, this country is safe.”

For their part, the Norlanders say they hope they can help build a new future for their guest family.

“So it seems like our whole lives we have been preparing for this mission to accept them into our home,” Sharon Norlander says. “Bring them to safety and help them dream about what their life can be in the future.”