Ukrainian families face decision, harrowing journey of where to go amid invasion

From the basement of his church in Dnipro, Ukraine, Bogdan Konovalov takes to social media.

He’s showing the world how this place of worship is also an emergency shelter for up to 60 people.

“I saw today, so many families with the kids, they had fear in their eyes,” the 31-year-old youth pastor told 5 EYEWITNESS NEWS. “People are so afraid, and we prepared food for them, we give all our supplies, for baths, for rooms.”

So far, Konovalov says about 30 people are using the shelter, but authorities say many others are fleeing Ukraine.

The United Nations Refugee Agency says one million people have left the country since the Russian invasion began less than a week ago.

UN officials say they worry this could become the biggest refugee crisis this century. 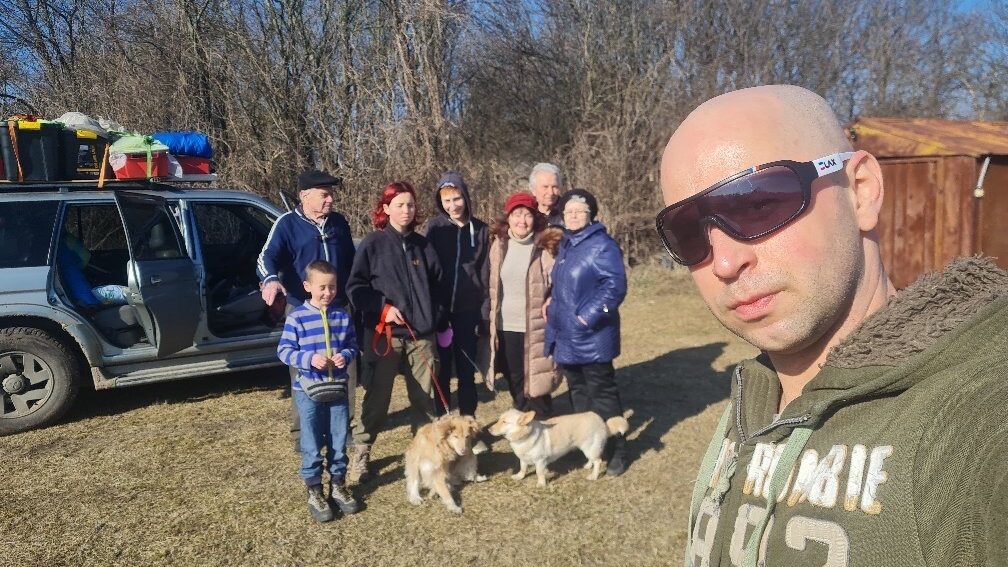 Konovalov says Ukrainians are fleeing from bombings, fires, and the horrors of invasion.

“We saw hands, legs on the streets because right now in small cities, people without weapons, trying to stop tanks of Russia,” he says quietly.

We first met Konovalov in February, when he was in Minneapolis, being fitted for a new prosthetic leg, many years after a terrible childhood accident involving a trolley.

Just last week, he, his wife Olga and their three children were in Bukovel, in western Ukraine, for a long-planned family gathering.

Konovalov says after the invasion, they felt compelled to return to Dnipro, his hometown — much closer to the fighting.

“First of all, because my mom and mom of my wife lives in our city,” he declares. “Hundreds of people right now are escaping the war. So as a pastor, my job is to help people.”

Last weekend they tried to catch a train from Bukovel. But trouble started almost immediately.

“Our train was delayed for 10 hours because when the train left for us, the station was bombed,” Konovalov recalls.

The train moving very slowly, with its lights out.

“Every time we passed the cities, we pray that rocket will not hit the train,” Konovalov remembers. “Many people were scared because we were not allowed to open the windows.”

Meanwhile, thousands of others were heading the opposite way, fleeing west to Poland.

“Over 700,000 refugees have now crossed the border and my family is among them,” says Paul Gavrilyuk, a University of St. Thomas theology professor. “So a journey that typically takes 10 or 12 hours, tops, maybe with a comfortable stop is now taking six days.”

Gavrilyuk says a family member was able to help guide his mother and father — now in their 70s — from their home south of Kyiv to the western border.

Their trip was also beset with problems: Mostly with their car, packed with their belongings.

“They managed to have two flat tires in 50 kilometers. They were stuck in the middle of nowhere,” Gavrilyuk notes. “They moved to one city in the west of Ukraine, and that city was shelled three times.”

He says his family members didn’t directly experience shelling or other violence along their route — because the timing was on their side.

“Thank goodness, they did not encounter anything,” Gavrilyuk explains. “They heard the sounds of shelling, but they have not encountered anything specifically on the road. The reason for that was primarily because they left on the second day of the war when there was still an opportunity to leave.”

They are now safe, he says.

“Having cleared the border with Romania they were offered a nice village cottage and warm food to spend the night and eat,” Gavrilyuk says. “What’s extraordinary is, I think, is atrocious acts of violence generate an incredible response in human nature, just in terms of kindness and generosity.”

He says, for now, his parents plan to settle in the Balkans, and perhaps return home sometime in the future.

Gavrilyuk says he’s glad they’re alive — but there are still sobering challenges ahead.

“My parents are now refugees, and I think that’s a difficult thought,” he says. “Because I was certainly hoping they’d be spending their last years of their lives in their land. The city to which they would be returning would be a city profoundly scarred by the war.”

Meanwhile, Konovalov says he hopes he’ll be able to make a difference.

“We need not just words, not just prayers, we need to do something,” he declares. “We want democracy, we want freedom. We want to choose and decide what we want to believe and choose our friends. That is our decision as a nation, as a human.”

Gavrilyuk has started a fundraiser to help Ukrainian refugees. You can find more information about it here.