The Russian military buildup along the Ukrainian border continues to directly impact people around the world — including thousands in Minnesota.

“I’m from Ukraine, and I would love my country to get the support of Minnesota people, and people all over the world,” declares Luda Anastazievsky, a board member at the Ukrainian American Community Center in Northeast Minneapolis. “There’s been a lot of suffering for the past eight years. A lot of people died — 14,000 Ukrainians died.”

On Saturday, dozens of people from Minnesota’s Ukrainian American community rallied at the State Capitol in St. Paul, with the hope that political leaders, friends and neighbors are paying attention.

“Russia is not only part of this conflict, it is the clear aggressor,” said one speaker.

“It’s been heartbreaking to hear the news and it’s very worrisome of course,” Anastazievsky explains.

She says the state’s Ukrainian community — about 17,000 people — are worried about family members who might be in harm’s way. 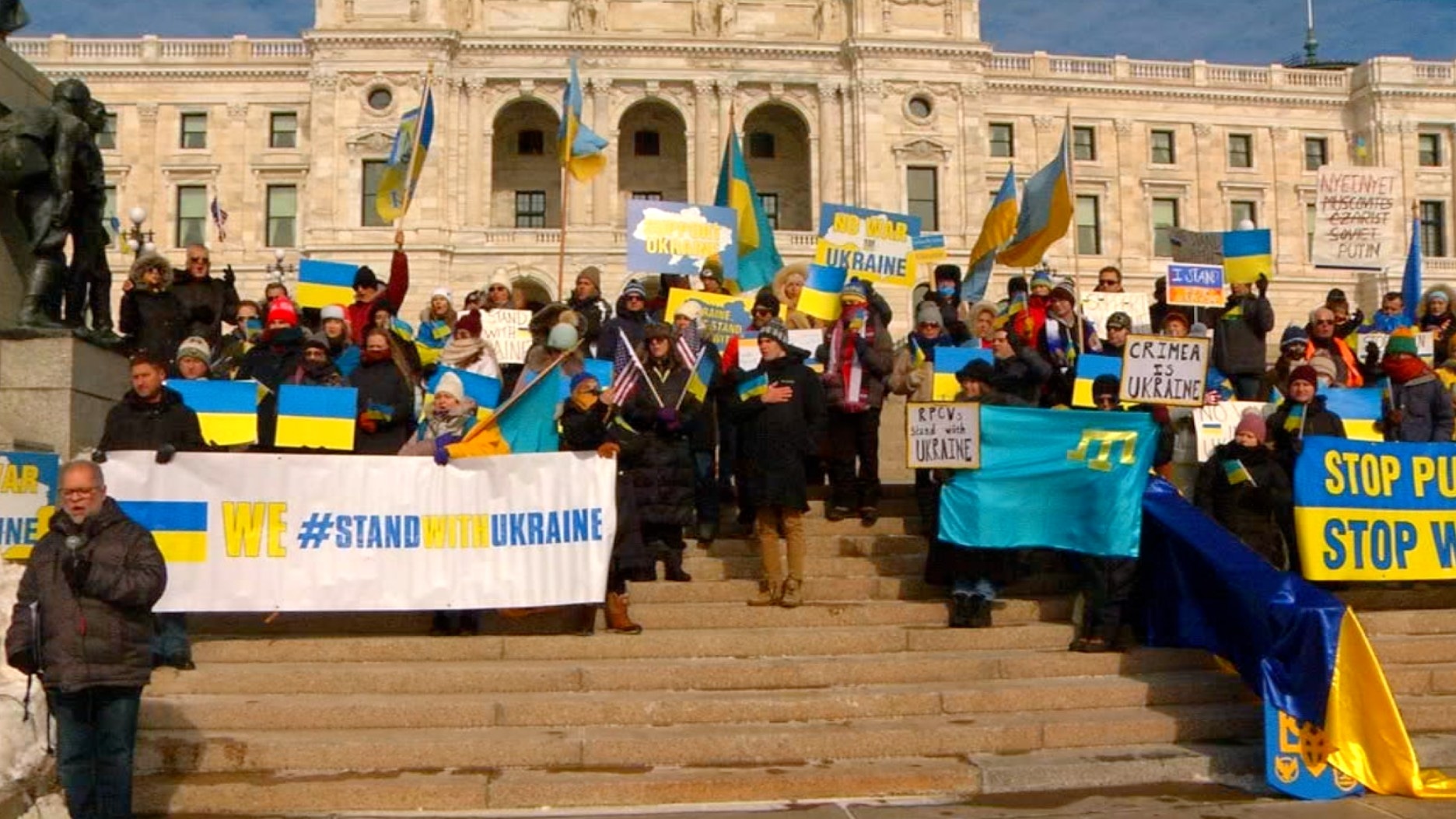 “Russian aggression is not new. It started in 2014 when the Russian troops occupied Crimea,” Anastazievsky notes. “People are worried, people can’t live normal lives, it’s a lot of psychological pressure, it’s a lot of economic pressure.”

Reason to believe an attack is coming

“We have reason to believe the Russian forces are planning to and intend to attack Ukraine in the coming week, in the coming days,” President Joe Biden declared.

But inside Ukraine, military training is also underway.

Experts say the country has a fighting force of about 215,000 — and that Russia could face an insurgent war if it invades.

Anastazievsky says relatives there have been keeping her updated on a daily basis.

“Recently they were telling me that they are training the self-defense units to learn how to defend Ukraine,” she says. “There are people from a very young age, from age seventeen to eighteen, all the way up through the older adults.”

A big concern of the U.S. and its NATO allies is that Russian-backed separatists are accusing Ukraine — without evidence — of preparing to launch its own attack.

Western officials warn that could be a part of Russia’s attempt to cast Ukraine as the aggressor and invade under the pretext of protecting Russian-speaking citizens.

Vice President Kamala Harris warns if that happens, the U.S. and its allies will “impose significant and unprecedented economic costs.”

“We understand and we have made clear that we remain open to diplomacy,” the vice president said. “The onus is on Russia at this point.”

Russia has denied it has any plans to invade Ukraine.

Meanwhile, the White House is also warning of possible Russian cyber-attacks against Ukraine and the U.S., saying they could be a precursor for any military attack.

The administration says there’s no specific threat, but is calling on private companies — especially those running critical infrastructure like power and water — to be ready.

All this, as the Ukrainian community in Minnesota is watching and waiting with concern.

“Now we have this substantial threat to the country where you were born, where your family and friends live,” Anastazievsky says quietly. “It is difficult, it is very difficult.”