The home, in a quiet Dayton neighborhood in the north metro, is a gathering place — a kind of enclave.

“I’m very glad to come here to America,” says Max Shevchenko, who says he’s a senior lieutenant in the Ukrainian Army. “To see this program, and what it does to people.”

On Saturday evening, they were sharing a traditional meal — while not mincing words about their injuries — or the fighting against Russian forces.

Two of the soldiers spoke with 5 EYEWITNESS NEWS with the help of a translator. 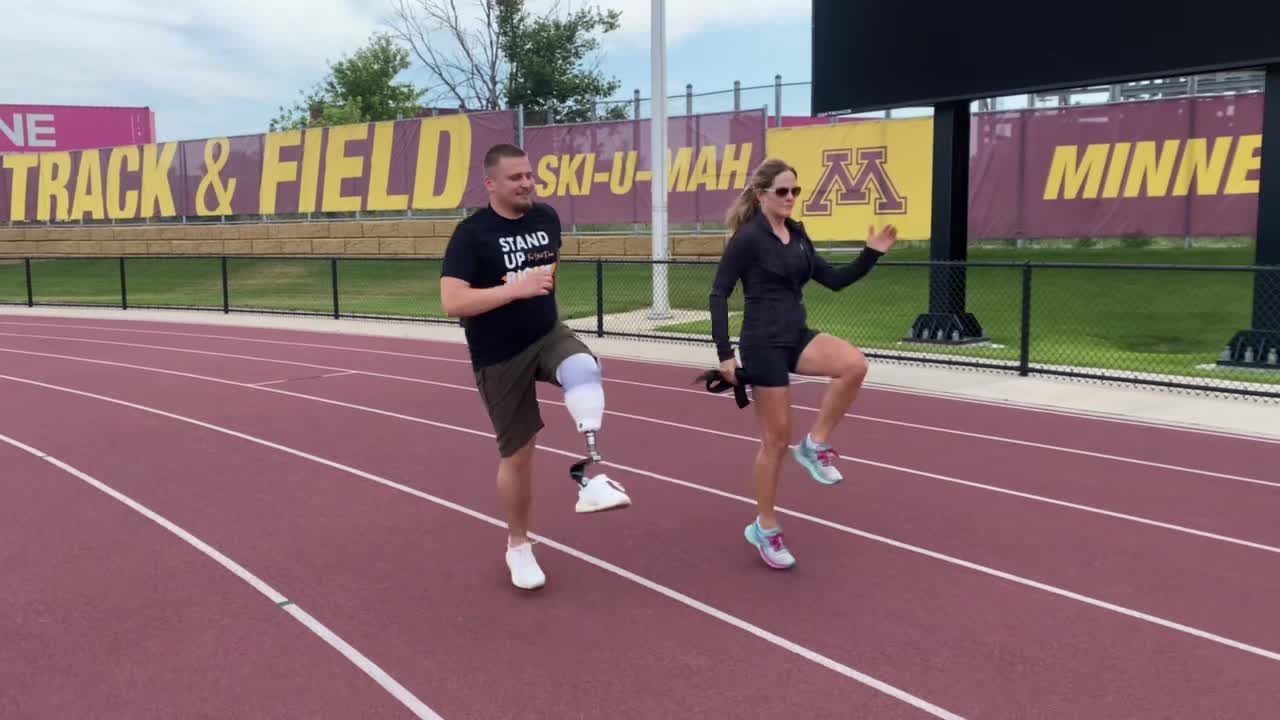 Max Shevchenko tests out his new prosthetic leg after being wounded in battle in Ukraine (KSTP).

“A shelling came… there was a missile coming from a tank,” recalls Andrii Bezuhyli, a 26-year-old Ukrainian Army medic.

He says his lower left leg was shattered in March, during a battle in Mariupol.

“When the shelling came, I was… my limb was all in pieces, but most of it was still in place,” Bezuhyli says.

Shevchenko says his left leg was mutilated below the knee during an air strike near the Russian border.

It happened on Feb. 24, the first day of fighting.

“I was wounded during a missile attack,” Shevchenko remembers. “We were in our positions patrolling and on the same day the war started, the attack came.”

But now, a time of healing.

Nearly two weeks ago, the soldiers were given a heroes’ welcome at MSP.

The Protez Foundation, a Minneapolis nonprofit, flew the group to Minnesota, and is providing them with artificial limbs.

All free of charge — part of its “Prosthetics for Ukrainians” project.

The effort includes field exercises at a University of Minnesota running track, along with periodic fittings.

“It’s a very unusual experience, especially at first,” Shevchenko says. “It’s way better to have at least something like this than to be walking with crutches.”

As they recover, both men say they appreciate the military aid coming to Ukraine from the United States.

Still, they worry about being outgunned by Russian forces.

“Especially we don’t have enough artillery to defend our positions and to moving forward with this war, even with all the aid that’s coming,” Shevchenko notes. “Our technology is pretty old as well, and we don’t have such technology or machinery in the war.”

They say another six wounded soldiers are scheduled to arrive in September.

Just this past Wednesday, the nonprofit began fittings for a 9-year-old Ukrainian boy in need of a prosthetic arm.

All those fittings happening at the Limb Lab, an prosthetic and orthotic provider in Minneapolis.

It’s unclear what their roles will be when they return to Ukraine.

The group will be guests of honor at the Ukrainian-American Center on Sunday.

Bezuhyli says his country will continue to fight.

You can find more information about the Protez Foundation here.