It’s been more than a year since Minnesota’s stadiums and arenas have been allowed to host fans in the stands, but that’s about to change two weeks from now. The Minnesota Twins announced ticket sale plans for their first 17 games of the season and the Timberwolves did the same for their last 12 home games.

"When we throw that first pitch at the home opener it will be a moment, a long time coming and one of pure celebration for us," Twins spokesman Matt Hodson told 5 EYEWITNESS NEWS on Monday.

The Twins will conduct a presale for season ticket holders on Tuesday for the first 17 games of the season from the April 8 home opener through May 6. Any remaining tickets will go on sale to the public on Thursday.

The Twins had workers in the stands wrapping nearly 30,000 seats with zip ties so they can socially distance 10,000 fans.

"Zip-Tie-Palooza," Hodson jokes. "All the seats that are not part of a pod are zip-tied together to prohibit other folks from coming and sitting and breaking up this pod system." 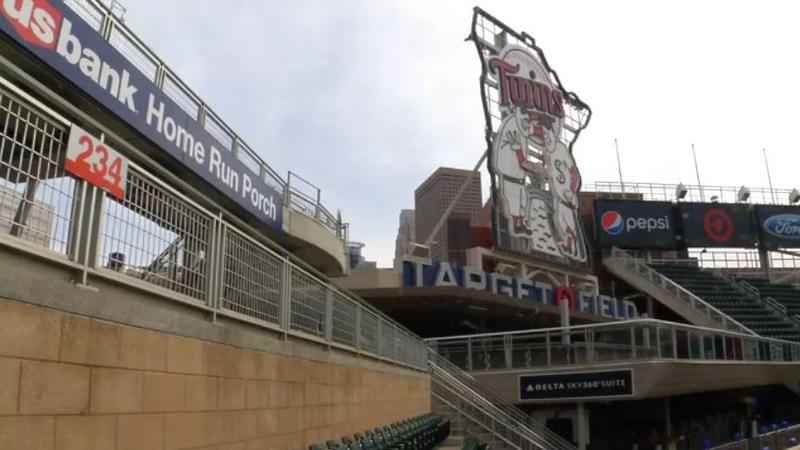 Each "pod" is at least 6 feet from any other seats with fans. It’s a system they’ve used successfully at Hammond Stadium during spring training in Fort Myers, Florida.

Another new wrinkle this year will be contactless ordering from concession stands. You can still walk up and order, but the team will encourage fans to order food and drink on their phones.

"You can pay right there from your phone," Hodson said. "Get an alert when it’s ready. You go pick it up at a designated grab-and-go station. Come back to your seat. Contactless ordering and payment for fans."

The team is also streamlining the process for getting into the stadium. Fans will have to answer a few quick questions about COVID-19 symptoms before going through new metal detectors that will not require people to empty their pockets. The team will not do temperature checks on the way in or require proof of vaccination.

The Timberwolves will have similar protocols in place for their final dozen home games starting April.

“Welcoming Timberwolves fans back to Target Center is an exciting step forward. The energy and passion they bring to games is a huge part of creating a home-court advantage for our players,” said Timberwolves and Lynx CEO Ethan Casson. “We will continue to work with Gov. (Tim) Walz and his team, local health officials, and the NBA to provide a safe and entertaining experience for everyone returning to Target Center.”

The Timberwolves will be allowed 3,000 fans because Target Center is an indoor venue. The team says they will implement enhanced cleaning protocols along with the seating pods, contactless concessions and other measures. Tickets will go on sale to the general public on March 31.

The Minnesota State High School League is still working on a plan to determine how many fans it will allow at the state hockey and basketball tournaments. The organization initially was only allowed 250 but now can go as high as 3,000. However, league sources say they’re considering plans for just 1,000 to 2,000 fans.