It’s called the Avivo Village — a shelter within a shelter.

“We’re calling them tiny homes, they really are rooms,” says Emily Bastian, Avivo’s vice president of ending homelessness. “Something COVID-safe, something that they could know that their belongings are going to be secured. That they could lock things up when they weren’t here. Where they could go 24/7."

The $2 million dollar project was built in just four months. 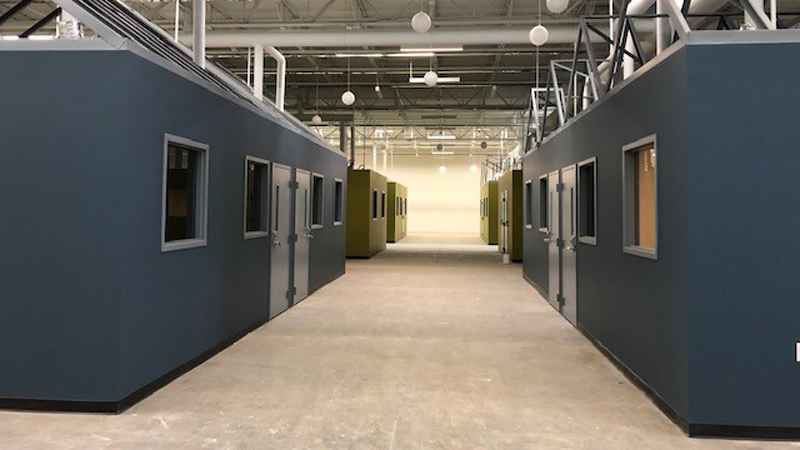 “I think it’s exciting and it’s a good idea,” says Cheryl, who’s been staying at the village since Dec. 30.

Before that, she says she was living in encampments and at friends’ homes for several years.

“It feels good to not have to make sure that the stakes are down in the ground when (a tent) starts to float,” she said

Right now, there are only 16 residents in the village, but Avivo hopes to increase that number to 100 by March.

Each room has enough space for a twin-sized bed and a comforter. There’s lighting, heat, and electrical outlets, with lockable doors on the inside and out.

"They know their belongings are safe. Pets are allowed,” Bastian said. “They can come and go as they want.”

There are individual, COVID-safe showers and bathrooms. Nearby are spaces for safe-distancing meetings with family members.

Bastian says the average expected stay will be between 45 and 60 days.

“There is definitely a desire for people to move from shelter to shelter into housing,” she says. “People here will be connected with a housing case manager, and we will work on helping them exit from here into housing, permanent housing as quickly as possible.”

Avivo is taking a "harm reduction" approach to help those needing chemical and mental health services and will have community health workers on site.

“We work with street outreach team members, and they heavily work in the street,” said Ruth Mestas, Avivo Village’s program manager. “Not going to turn them away if they’re using, and so all of our staff are CPR trained and Narcan trained.”

The inspiration for Avivo Village came from the large number of people living outside in the metro, Bastian says. Many were staying in encampments or parking lots.

The nonprofit says it surveyed those areas and found half the population are Native Americans. Now, the rows of tiny homes in the village are painted in colors representative of the Native American Medicine Wheel: red for the sun, yellow for the moon, green for the earth and blue for the stars.

There will be a referral service for future residents at the village.

“Outreach workers from the county or various nonprofits that are out on the streets and engaging with people,” Bastian said. “They know where the people are staying, they know if they’re unsheltered, if they’re in a tent or an abandoned building, or maybe they’re staying in their car.”

Meanwhile, Cheryl says she’s grateful to be in a safe, warm place.

“Oh my gosh, it’s 100% better,” she said. “You know that cold wind can do something treacherous at night.”