About 90% of Minnesota inmates are diagnosed with substance use disorders, according to the Minnesota Department of Corrections (DOC). A new partnership in Hennepin county is working to connect individuals in the justice system with peer recovery coaches.

“People need support. They need a plan,” said Justin McNeal, the manager of justice involved support programs at Minnesota Recovery Connection (MRC). “When I was sitting in jail, there was very little services offered to me. […] I remember that and thought wouldn’t it be cool if we had a program where people, while they’re incarcerated or while they’re on probation, whether they’re struggling or not, get connected to a recovery coach that helps them plan – do you need housing, do you need a job, what kinds of supports are you using? What are you doing for happiness and self-care? And so we just started doing that.”

He uses his personal perspective to connect with the people he helps. McNeal has been in recovery for five and a half years.

“If you’d ask me is this what I’d be doing five years ago, I’d tell you you’d be crazy,” he said.

McNeal has six felony convictions, which stem from his struggle with substance use disorder. It’s a battle that began when he was just 15-years-old. 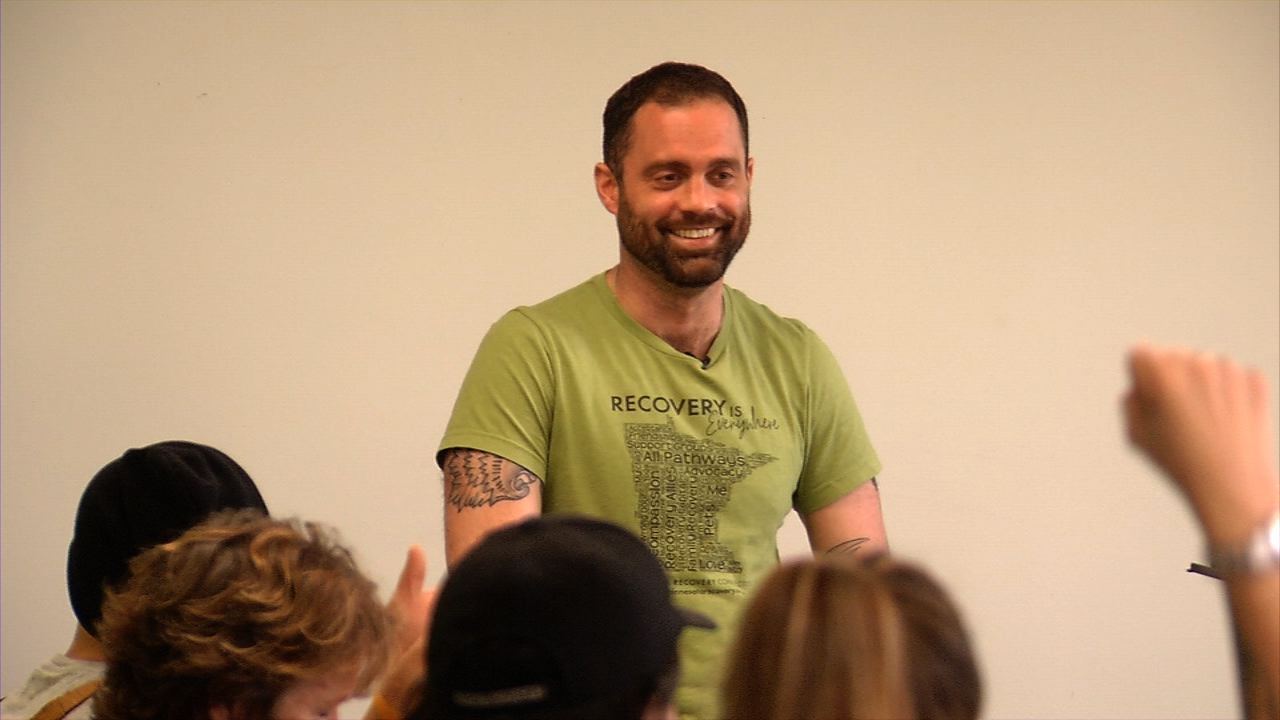 “It’s very similar to other people’s stories where they just started partying and had the unfortunate disease of addiction inside of them and it gets triggered,” McNeal said.

By the time he was 30-years-old, he was using meth and heroin every day. He describes stealing to get money to get high, and past attempts at treatment were unsuccessful.

“I got out, I returned to my same environment, the house I was owning, around the same people and I was using within hours,” said McNeal. “I was in jail this last time, and I finally had gotten some time to detox, and I realized like what the heck were you doing? I think oftentimes, people in the world get so wrapped around the substance someone is using, [they do] not realize that they’re struggling with a disease and they wouldn’t make those choices had they not been struggling with it.”

His final arrest was in December 2016, days before Christmas. He spent a year in an R.S. Eden treatment program awaiting sentencing.

During that time, McNeal was also assigned a new probation officer. It was a life-changing connection.

“He was in court for theft and drug charges,” said LaToya Wilson, his former probation officer. She is now a Hennepin County Department of Community Corrections and Rehabilitation (DOCCR) program manager. “When I met Justin, I knew right away that I wanted to help.”

She encouraged McNeal to volunteer, which led him to MRC. They also developed a plan for when he left the treatment program.

“My message to Justin, just like it was for all of my clients, was ‘I can’t help you if you don’t tell me what’s wrong,” she said. “I want to meet them where they’re at and make sure I’m providing resources to them that are helpful to them and not a hindrance to them. So many times, they don’t know what they need, and I don’t know what they need unless we talk about it.”

“When you do that, that builds their confidence and gives them the wherewithal to go ahead and do what it is they want to do and need to do in order to be productive members of society,” she said.

McNeal was sentenced to 10 years of probation but only ended up serving a fraction of that time due to the positive changes he made in his life. His volunteer work at MRC developed into an internship and then a full-time job.

“You get so beaten down when you’re using — that no one believes you, no one trusts you, and no one has faith in you,” said McNeal. “When you have a good relationship like I did in my probation officer, saying ‘Hey, I believe in you, keep going, I know it may be hard, but you got this,’ that helps you get well.”

“I think it was just a breath of fresh air to have someone believe in me,” McNeal added. He’s now helping others find their path.

Last year, with Wilson’s help, he launched a pilot program between Minnesota Recovery Connection and the Hennepin County DOCCR. It connects people struggling with substance use disorder who’ve encountered the justice system with peer recovery coaches.

Participation is voluntary, and probation officers offer it as a suggestion to the individuals they’re working with.

Once an individual agrees to participate, McNeal or a team member calls within 24 hours.

“I think some of the first things I disclose to them is ‘I’m in recovery,’ and I also disclose to them that I have six felony convictions on my record so that immediately it opens that door that we have something in common,” said McNeal. “Just letting people know you’re there for them and it’s possible to change. When someone can call you and say ‘Hey, I’m having a hard time,’ and the other person listens, that’s where the magic happens really.”

He told us his team has received more than 150 referrals since April 2021. About 65 people have used their services more than two times. At least 40 people continue to have a relationship with MRC. Some who’ve participated in the program have started working to become a recovery coach themselves.

McNeal said he tries to share a message of hope and optimism.

“That’s one of my biggest messages that I like to send by the work I do is that you can get a good place to live, you can get a good job, you don’t have to live for the mistakes of your past — if anything those were learning lessons,” he said.

McNeal told us the work he does to help others also helps him stay in recovery.

“I wouldn’t take any of it back because it led to this,” he said. “My goal each year is to find ways to impact more people in Minnesota or nationally. I just see my work growing, and hopefully creating more programs that will affect the community for [the] better.”

For information about how to become a Hennepin County Probation Officer click here.