It might be the most provocative television ad of the 2022 campaign season in Minnesota.

A group called Minnesota for Freedom that’s funded by the Republican Association of Attorneys General based in Washington, DC, is spending hundreds of thousands of dollars on an ad that labels Keith Ellison as the “criminal’s choice for attorney general.”

“This is a call from an inmate at a Minnesota correctional facility. … Press one to accept,” is how the ad starts. “Hello, I want you to know why the inmates are supporting attorney general Keith Ellison.” That phone call is fictitious and used for dramatic effect to make a few claims that are factual.

“He praised a cop killer and even praised a woman who put bombs on cop cars,” the ad claims.

The ad cites a 2016 story on CNN’s website that profiles Ellison and discusses his controversial stands on several issues, including the case of Assata Shakur, a woman who was convicted in 1977 for the 1973 murder of a New Jersey state trooper. She later escaped from prison and fled to Cuba. She remains on the FBI’s Most Wanted list. Shakur claims her conviction was racially motivated. 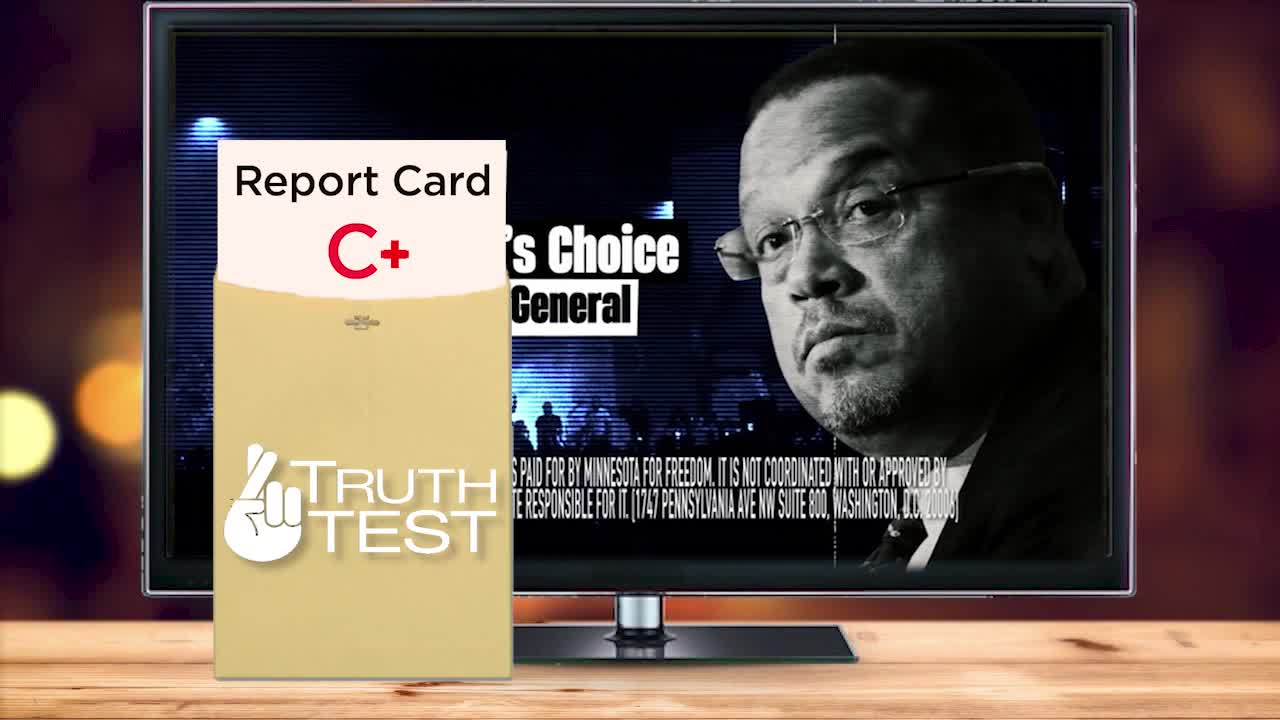 A group called Minnesota for Freedom is spending hundreds of thousands of dollars on an ad that labels Keith Ellison as the “criminal’s choice for attorney general.” It makes some truthful claims but also exaggerates.

In the 2016 story, CNN says at an event in 2000, “Ellison also spoke favorably of convicted cop killer Assata Shakur and expressed his opposition to any attempt to extradite her to the United States from Cuba, where she had fled after escaping prison.”

That event in 2000 was actually a fundraiser for a woman who is also the center of one of the claims in the ad about putting “bombs on cop cars.” Sara Jane Olson was living in St. Paul when she was arrested in 1999 after the FBI discovered her true identity was Kathleen Soliah, a former member of the Symbionese Liberation Army who was wanted for planting bombs near police cars in Los Angeles in the 1970s. She initially denied her involvement but later pleaded guilty to “possessing explosives with intent to murder.”

Although Ellison did not represent her as her lawyer, he did offer her support and legal advice. In 2001 he spoke with 5 EYEWITNESS NEWS about what Olson was going through.

“I don’t think mentally there is anything wrong with Sara Jane Olson, but emotionally something I’m sure that this has taken an awful toll on her.” After her changing her plea from not guilty to guilty, Ellison also said, “I don’t regret supporting her. I don’t feel I made the wrong decision, and I don’t feel betrayed.”

The ad makes one final claim about Ellison: “He’s been anti-cop forever. Cops know it. Ellison even blamed them for the damage rioters caused.”

This claim is based on a video and article on the website of the conservative Washington Free Beacon and is somewhat misleading. Ellison does say police misconduct cases often spur expensive legal settlements that cost taxpayers a lot of money and cause civil unrest, but he stops short of blaming police for damage caused by rioters.

“We’re paying through the nose because of misconduct,” he says while being interviewed at an event sponsored by the Council on Criminal Justice in Washington in 2022. “Oh, and don’t even get started on the cost of civil unrest,” Ellison says in the video. “Even if people don’t break windows you still gotta pay overtime for officers who are managing that situation.”

Although this ad clearly exaggerates an opinion that “Keith Ellison is the criminal’s choice for attorney general” with no supporting evidence, it otherwise includes mostly truthful factual claims. It gets a C+ on the 5 EYEWITNESS NEWS “Truth Test.”