With Southwest Airlines only operating about a third of its schedule Thursday, customers who actually arrived at Minneapolis-Saint Paul International Airport breathed a sigh of relief.

“There were three flights going from Baltimore to Minneapolis today, two were canceled but ours wasn’t,” said Karen Wald, of Blaine. “My husband had been following for two or three days how the flights are going and everything just went very well.”

Southwest has scrapped more than 13,000 flights in the last week, according to the tracking website Flight Aware. Cancellations have kept some travelers from their destinations for days.

“Monday we were supposed to leave, we spent over eight hours in line,” said Suzette Walker, who planned to fly from New Mexico to MSP. “They rescheduled us and then that was canceled. But the people were wonderful — Southwest employees, thank you, I love you very much. CEO, I don’t care much for you.”

The airline acknowledged in a statement Thursday that its apologies only go so far and pointed customers to a page on its website where they can ask for a refund for canceled and significantly delayed flights. According to Southwest, it will also “honor reasonable requests for reimbursement for meals, hotel, and alternate transportation (such as rental cars, or tickets on other airlines).” 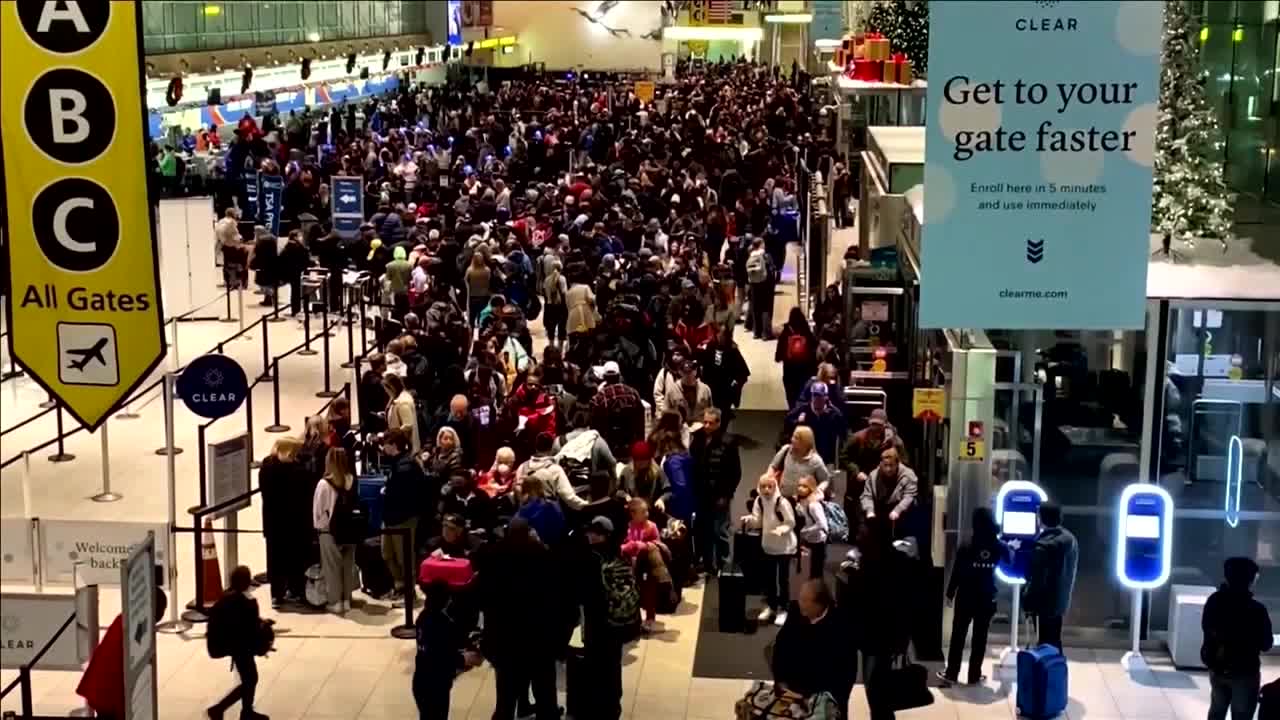 Crowds at MSP on Thursday (KSTP).

In a recorded video message Thursday, United States Transportation Secretary Pete Buttigieg pledged the DOT will ensure passengers get what they’re owed. He said the DOT will also assign additional resources to follow-up on complaints.

“We will penalize Southwest as we would any airline to the tune of potentially of tens of thousands of dollars per violation if they fail to meet what’s required of them to take care of passengers,” said Buttigieg.

“While the DOT has said it’s going to hold Southwest accountable for this and make sure they deliver on these promises, it’s still up to Southwest what they will and won’t do for consumers,” he said. “The only thing they’re required to do is issue a refund to travelers whose flights were canceled, weather or not they can get their money back not just credit to their airline. Beyond that, it’s kind of the wild west in the United States. Airlines can do whatever they want based on what they’ve written into their contracts.”

Customers like Walker told 5 EYEWITNESS NEWS they’re not concerned about getting reimbursed.

“It’s the people that were trying to get home, those are the people that need to be compensated,” she said. “[Those that] had to stay extra days in hotels, had to find accommodations. We at least went back to our house so it was okay for us.”

Walker also hopes the airline acknowledges its ticket agents and staff who helped customers amid the meltdown.

“They need to recognize these people because they were angels,” she said. “The woman we dealt with had been there since 3 o’clock in the morning and it was 4 o’clock in afternoon, poor thing.”

The airline said it plans to return to normal operations on Friday. Passengers with flights still ahead over the next week are hopeful there won’t be further disruptions.

“Who knows what’s going to happen,” said Ellen Murphy, who has Southwest flights to St. Louis and then later Boston booked in the coming week. “We are living in the unknown of will we get home, in a sense? But we’re hoping January 7 will be maybe better.”

Passengers across the country were also separated from their baggage. It’s unclear how many bags are unclaimed at MSP.

In a statement, a Southwest spokesperson told 5 EYEWITNESS NEW, “We don’t have city-specific information to share. Our Teams are working around-the-clock to reunite Customers and their luggage as quickly as possible. For Customers who have not yet received their luggage, they can visit Southwest.com/baginfo for additional info and steps they can take to assist us with reuniting them and their luggage.”