Travel takes off at MSP during holiday weekend

From the freeways to the runways, the travel industry is starting to recover after numbers bottomed out last year.

Lines formed at Minneapolis-St. Paul International Airport in the hours leading up to the three-day Memorial Day weekend.

Kramer Confeld is traveling to California with her daughter to surprise her son for his 40th birthday.

Of the last year, she said, "It’s been different because we like to travel." 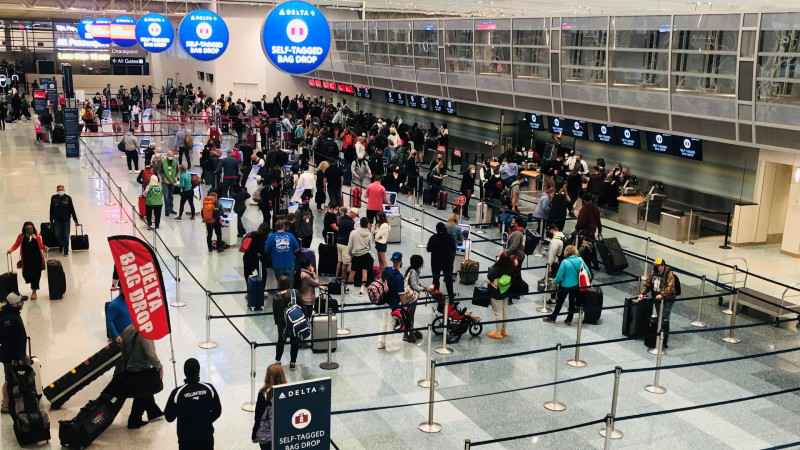 Travelers line up in the ticketing area of Minneapolis-St. Paul Airport on Friday, May 28, 2021.[Chris Knoll/KSTP]

Kramer Confeld told 5 EYEWITNESS NEWS she is now fully vaccinated, which gave her the confidence to travel.

Traveler Cornelius Rish said he is also feeling more confident compared to a year ago.

Masks are still required at all airports and on planes, according to TSA restrictions. In addition, MSP has hand sanitizing stations, extra cleaning protocols in place and plexiglass up at counters.

"From an industry-wide perspective, there is a lot of optimism with the demand they’re seeing in the bookings and in the aircraft activity," MSP spokesman Jeff Lea said.

Lea said traffic has especially increased over the last two weeks, leading into the holiday weekend.

"We’ve had two really busy days of over 27,700 passengers go through the checkpoints," Lea said. "We haven’t quite eclipsed the peaks of spring break, but we’re getting close."

According to Lea, average daily departures will increase to 404 by June, up from 139 a year ago.

The number of routes offered will also grow to 185 by June.

"We’re over 50% of where we were in 2019. Based on April statistics, May is going to look good," Lea said. "We’re inching incrementally. The demand and the forecast of the bookings are showing up really well now."

There are still about 40 pre-pandemic routes that remain suspended, but MSP has also added routes, according to Lea.

"Since the pandemic began, MSP has gained 24 routes that weren’t here in 2019," Lea said. "Some of those are seasonal, some are year-round. Some of those coming on board this summer … a lot of it is just where people want to travel this summer, and a lot of it is outdoor getaways. You’re looking at Alaska, Montana and Wyoming and the beaches."

"This is rounding into the start of the travel season, and that’s always more expensive, pandemic or not," said Kyle Potter, the executive director of Thrifty Traveler, a Minnesota-based flight deal and travel news website.

"In some cases it’s going to be a perfect storm of high ticket prices," Potter said. "Airlines are capitalizing on demand for the first time in more than a year and people are coming out and they’re willing to pay whatever they can just to get to Florida, or California or wherever."

Prices aren’t skyrocketing across the board, however.

"One you get past peak summer, there’s certainly deals," Potter said. "Even if you’re going to go somewhere mid-July or August, we’re still finding roundtrip fares from Minneapolis to places like Miami, Orlando, Phoenix, Denver, California for under $100 round trip."

He also advises travelers to look at flight prices before they request vacation time from work or book hotels.

"Look at the destination you want to go to and look at what airfare is and how much it can change just by shifting your departure or arrival dates even by a day or two," he said. "It can make a difference of hundreds of dollars."