Bridges and homes have been swept away, with entire sections of highway simply gone.

“It really was a pretty dire situation,” says Adam Rice, of KAR Safaris. “All of it’s been historic, all historic, feet past the highest levels these rivers have ever seen.”

“This is pretty crazy. We’re used to seeing small rockslides, but nothing like this,” Kate Rice, Adam’s wife, declares. “Seeing entire sections of road completely wiped out — I was supposed to be on that road that is completely gone. It’s definitely not something we’ve ever experienced or anything I feel like we would have in our lifetimes.” 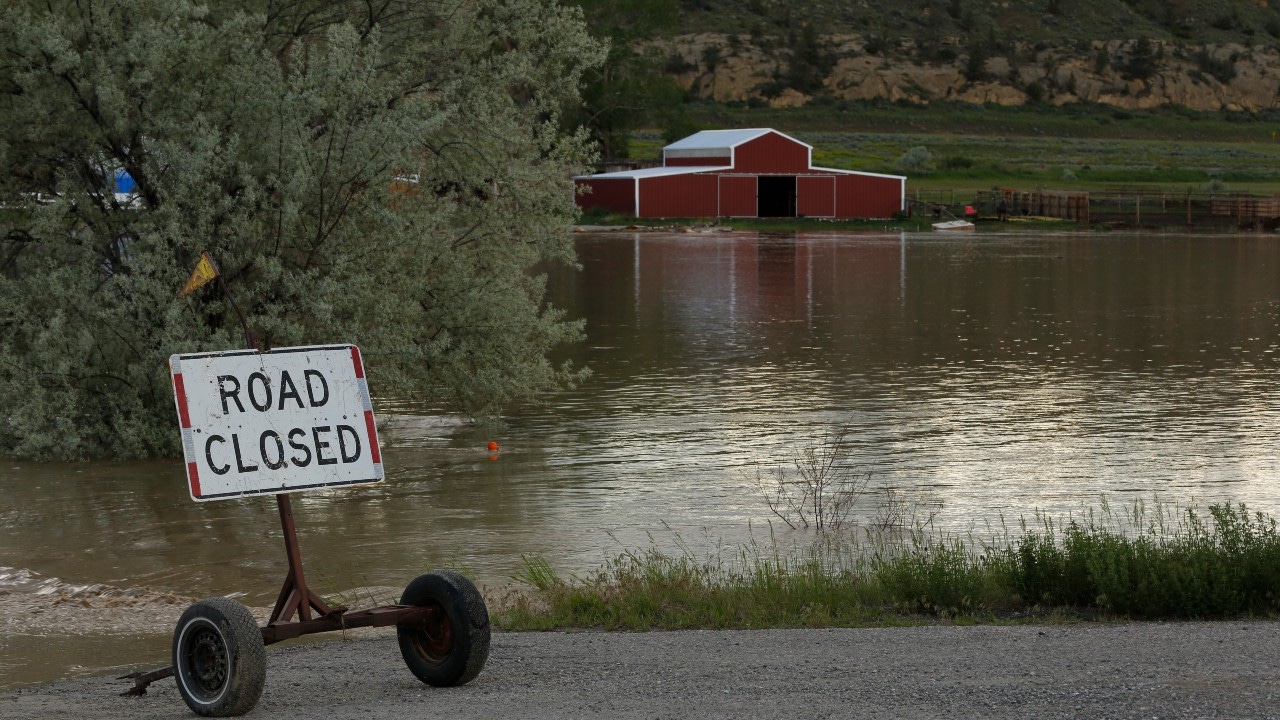 Floodwaters are seen along the Clarks Fork Yellowstone River near Bridger, Mont., on Monday, June 13, 2022. The flooding across parts of southern Montana and northern Wyoming forced the indefinite closure of Yellowstone National Park just as a summer tourist season that draws millions of visitors annually was ramping up. (AP Photo/Emma H. Tobin)

The Rices found themselves inside the park Monday as floodwaters were rising.

Adam Rice was taking clients through Yellowstone to Grand Teton National Park, while Kate Rice was working remotely from a central area in Yellowstone.

The couple, originally from Duluth, have been tour guides in both parks for the past three years. They typically set up tours for about 100 clients a year, all small groups of five to six people.

Adam Rice says they’ve been doing photo work there for about a decade. This was different, though.

“You know, just these big meadows that were essentially lakes and you’re kind of looking around like this is getting a lot worse than it even was this morning,” he said. “I told my clients, I said, ‘This is the highest I’ve ever seen the water,’ and it was only a foot or two below the road.”

On Monday, the U.S Park Service ordered 10,000 people to evacuate.

Adam Rice, meanwhile, says he was scrambling to get a group of clients to safety.

“It was crazy to drive against the grain. Everybody’s leaving and evacuating, and we’re going the opposite direction, so it was very interesting,” he remembers. “When we got them back to their campsite, they were pretty much instructed to pack up and get out.”

Adam says his clients — a mother, daughter, and grandfather — were able to evacuate safely.

Meanwhile, some homes are still underwater. But in riverside towns like Red Lodge, Montana, receding waters have left a sea of mud.

“A bridge went out and it started diverting a creek, and the water started rolling in the back,” resident Pat Ruzick explained. “Broke out a basement window and started filling up my basement and I quit.”

Authorities say Yellowstone National Park will remain shut down for the rest of the week.

The park’s more flooded northern half is expected to be closed even longer.

“Think of Yellowstone as a figure eight,” Kate Rice said. “So that whole top part of the eight will remain closed indefinitely.”

Those high waters not only destroyed roads and homes but also impacted the area’s economy, just as the summer tourist season is kicking off.

More rain is expected this weekend, and there’s more snow at higher elevations that has not yet melted.

“With the closure that could happen, this is really impacting these communities right now,” Kate Rice said. “Especially tour operators, people like us, could be potentially out of work for a very long time.”