‘This is a game-changer’: U of M spinoff company launches face mask it says can kill the coronavirus

Face masks have been a part of our lives for nearly a year already since the pandemic began. Health officials say they’re the simplest way to help prevent the spread of the coronavirus.

But now, Claros Technologies — a spinoff from the University of Minnesota — has developed a mask it says is capable of killing the virus.

"The mask is, we basically created a new textile that has anti-viral properties," added Abdennour Abbas, the company’s co-founder and an associate professor at the U of M.

Could this new mask — called the Log3Mask — be a potent weapon in the fight against COVID-19? 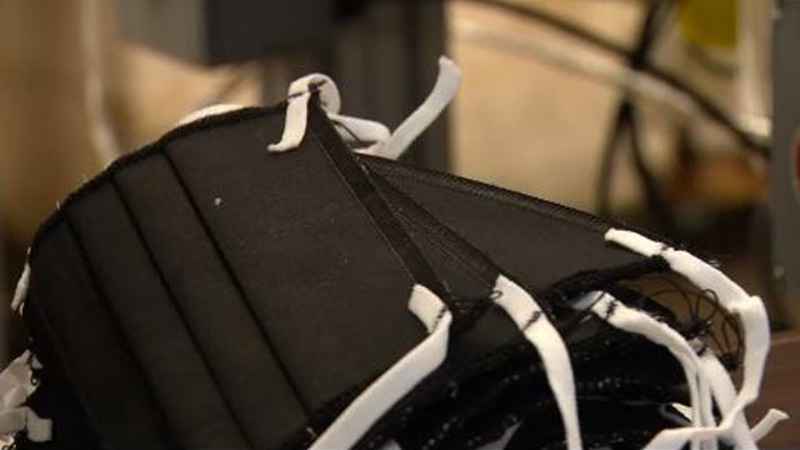 "You’ve got the best performance on the market," Claros CEO Michelle Bellanca said. "It’s killed 99.9% plus of bacteria and coronaviruses."

Claros began as a spinoff in 2019, receiving a grant from the U.S. Department of Defense.

"We started partnering with the DOD, for example, developing functional textile solutions for different military-grade applications," Bellanca said. "It was from that work that the anti-microbial, anti-viral functionality was born."

Then, the pandemic hit.

The Claros team, about 10 people, pivoted their research to stopping the spread.

"We wanted to build the mask based on science," Abbas declared.

Claros said their mask is different in several ways.

The company says three fabric layers, each with a different thread count and pore size, are able to block most droplets the size of coronavirus aerosols.

A proprietary zinc solution is infused into a fabric, then heated to form zinc nanoparticles 1,000 times smaller than a human hair.

The company said the particles, now trapped in the fabric, won’t leach out, even after 100 washes.

The zinc is harmless to humans but deadly to the virus.

"The thing with zinc is, over time, if it’s exposed to humidity or water that’s in our breath, it’ll release ions," Andrew Gonzalez, the company’s senior materials science engineer, explained. "It’s these ions that will actually target the virus or the bacteria or other microbes, and that’s what will kill them."

Claros explained it this way.

Those ions are zinc atoms that become positively charged by moisture.

They’re attracted to the coronavirus’s protective envelope, called a capsid, and the spike protein the virus uses to attack healthy cells.

"You can think of it as little arrows or little daggers that are going to punch through this envelope and expose the virus," Gonzalez said.

"That pull, like a magnet," she said. "It pulls on the virus itself, and it pulls so strongly like a magnet that it bursts apart the capsid."

In the process, Georgiou said, the capsid and the spike proteins are destroyed.

"It’s like cutting your skin, right?" she noted. "You would bleed, so when you break apart the capsid, it’s going to destroy whatever’s inside of the virus itself, and that’s how it causes viral death."

Claros said those zinc atoms also bind to proteins in the virus’s RNA — its genetic material — and changes their shape, making the virus inactive.

The company said the Log3Mask can do all this within 10 minutes.

KSTP spoke with Hamada Aboubakr and Sagar Goyal, who are both PhD-certified virologists at the University of Minnesota.

They published a report about testing fabrics supplied by Claros that were embedded with the zinc nanoparticles.

"Does this technology work, does it kill the virus?" KSTP asked Aboubakr. "Yes," he answered.

"For testing, we used the coronavirus of pigs, called TGE," Goyal added.

The university doesn’t have the facilities to test for COVID-19 but both scientists said the TGE virus — a surrogate — is genetically similar enough to SARS-CoV-2, the virus affecting humans, to make this a valid test.

"And if we are able to kill the surrogate, my considered opinion is that we can kill COVID-19, too," Goyal said.

According to their report, the scientists compared fabric swatches embedded with the nanoparticles with those that were not.

They exposed the samples to the TGE virus for three time periods: 10 minutes, 30 minutes, and one hour.

"We found the treated samples, as compared to the untreated ones, are effective for inactivating the virus," Aboubakr declared.

In other words, they claim the nanoparticle fabrics neutralized almost all the TGE virus in 10 minutes.

"We could see a reduction in the virus by 99.9% or even more," Aboubakr said.

But what about those nanoparticles holding up after 100 washes?

"The real question is whether or not the nanoparticles are resilient in the fiber itself," Dr. Georgiou pointed out. "When you wash it, how long are those nanoparticles effective in that fabric?"

Aboubakr and Goyal said they did multiple viral tests on samples provided by Claros, although they said they didn’t know how many times they were pre-washed.

"All the samples they provided us with were effective," Aboubakr said. "Actually, we repeated this work about six times, six duplicated tests on different days, and they gave us the same efficacy."

The scientists said, during their tests, the zinc remained intact. But Aboubakr decided to do one more test.

"I also did another experiment on bacteria, with a 100 times washed sample, and it is also effective against the bacteria," he said.

Both men said they believe the mask works.

"Ten minutes seems to be pretty good," Goyal explained. "If there are, let’s say 1,000 virus particles, deposited on your mask, they should be killed in about 10 minutes."

Abbas said he’s making all the testing data available to the public so people can check the studies themselves.

He said Claros is focusing on children’s safety as well as adults.

"This is a very important point," he said. "If we want to prepare a safe way for our children and our teachers to go back to school, is to provide them a better way to protect themselves."

Perhaps the happiest about all of this — outside of the Claros team — is Miller.

"I think it’s great technology," he explained. "We do all kinds of textile products."

When the pandemic hit, Miller was worried about keeping Minneapolis-based Airtex running and his 85 employees working.

"We wanted to make sure that our people have work to do, and they were closing down all the businesses," Miller recalled. "We felt it was essential to be an essential business."

So, last April, Miller pivoted to making personal protective equipment, including the majority of masks for Claros, and the operation of the crescoating process.

"These types of masks that you see around here, that I’m wearing, one will come off the line every 10 or 15 seconds," he said, pointing to his assembly line.

Claros isn’t releasing any specifics but said it’s sold "tens of thousands" of Log3Masks since an initial rollout in December.

There are three different models, ranging in price from $20 to $39.

The company also said it’s working on a plan to combine its Log3Mask with an N-95 mask.

They’ll ask the U.S. Food and Drug Administration to approve that mask as a medical device.

Claros said, besides selling the masks, it’s also donating thousands of them to Minnesota shelters and senior centers.

"When COVID hit, No. 1, we wanted to do something for the people," Miller said. "It’s the right thing to do and I think it’s a good thing, and it’s good for people. That’s what we’re really all about."