Texas elementary school shooting: What do we know so far?

A gunman stormed into an elementary school Tuesday in Uvalde, Texas, killing 19 children and two teachers in the United States’ deadliest school shooting in nearly a decade.

Law enforcement officers killed the shooter, identified as a local 18-year-old who had shot and wounded his grandmother and spelled out his violent plans in online messages shortly before the massacre at Robb Elementary.

Investigators say they don’t yet know a motive for the shootings.

A look at what we know so far:

WHAT HAPPENED IN UVALDE?

The attacker, 18-year-old Salvador Ramos, shot his 66-year-old grandmother in the face at their Uvalde home, then fled in her truck as she summoned help, according to Gov. Greg Abbott, Texas Public Safety Director Steve McCraw and other officials.

A short distance away, Ramos crashed the truck outside the school, got out with a rifle and approached a back door, officials said. They said an officer assigned to the school “engaged” Ramos, but the gunman got into the building and down a hallway to a fourth-grade classroom. After locking the classroom door, he opened fire around 11:30 a.m. with an AR-15-style rifle, carrying multiple magazines. 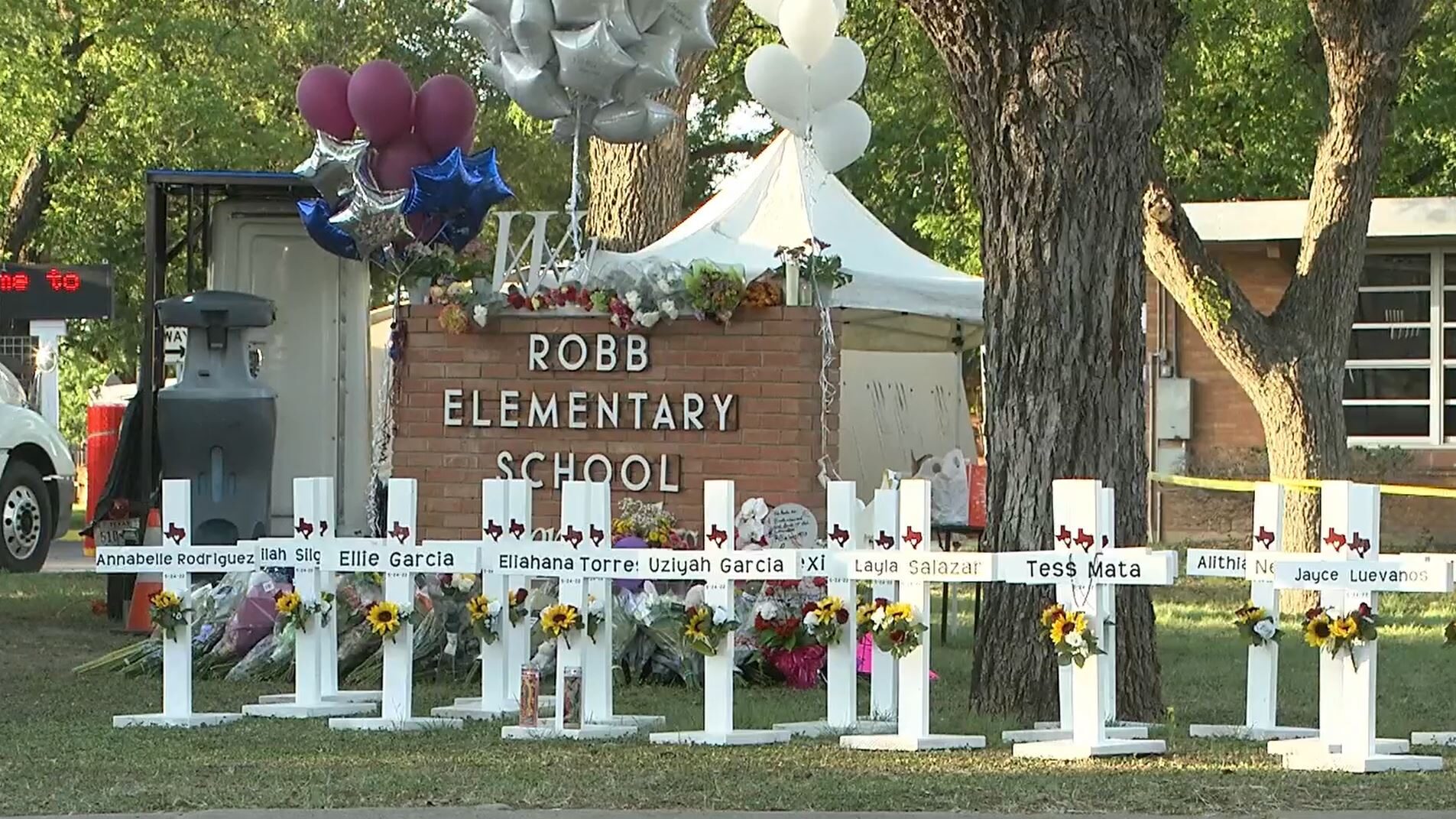 A memorial is set up outside Robb Elementary School in Uvalde, Texas. (ABC News)

A team including local officers and Border Patrol agents ultimately forced the door open and shot Ramos to death after he fired at them, police said.

Other officers and responders shattered some of the school’s windows so teachers and students could escape.

Ramos was wearing a tactical vest, though not body armor, according to state senators who said they were briefed on the shooting. There was another AR-15-style rifle in his truck, and a backpack with several magazines full of ammunition was found near the school entrance.

WHO WERE THE VICTIMS?

Authorities haven’t yet released the victims’ names, but some information about them has emerged from their families.

Eliahna Garcia was an outgoing 10-year-old who loved to sing, dance, play sports and be with her family, according to aunt Siria Arizmendi. Uziyah Garcia was only 8 and “the sweetest little boy that I’ve ever known,” said grandfather Manny Renfro, recalling how the youngster was already able to master football pass patterns.

Xavier Javier Lopez, 10, had been looking forward to a summer of swimming. Ebullient and loving, he was “just enjoying life, not knowing that this tragedy was going to happen today,” cousin Lisa Garza said.

“She was just a whole lot of fun,” said her father, Vincent Salazar, remembering how she danced to TikTok videos and sang along with him to the Guns N’ Roses song “Sweet Child O’ Mine” every morning on the way to school.

Jailah Nicole Silguero, 10, hadn’t wanted to go to school Tuesday, appearing to think that something bad would happen, her mom, Veronica Luevanos, told Univision. A cousin of Jailah’s also was killed.

Eva Mireles, 44, had been teaching for 17 years, according to a welcome letter to students she wrote last fall. She and her husband, a school police officer, had a grown daughter.

Mireles wrote that she loved running and hiking, and relative Amber Ybarra said she had an adventurous spirit.

WHO WAS THE GUNMAN?

Facebook said Ramos’ posts were private messages that came to light after the killings.

Investigators also have been scrutinizing an Instagram account that apparently belonged to Ramos. In the days before the shooting, posts featured a photo of a hand holding an ammunition magazine and another photo of two AR-15-style rifles. The account asked another Instagram user to share the latter photo with her 10,000 followers; she declined, saying it was “scary” and she barely knew him.

On the morning of the massacre, the account linked to Ramos sent her an ominous message: “I’m about to.”

WHERE DID THE GUN COME FROM?

The gunman legally bought his weapons soon after his 18th birthday and days before the attack, law enforcement officials told state lawmakers.

He purchased one rifle from a federally licensed gun dealer in the Uvalde area May 17, according to a state police briefing to state Sen. John Whitmire. On May 18, the gunman bought 375 rounds of ammunition. Then, two days later, he bought a second rifle.

WHAT DON’T WE KNOW?

Authorities haven’t disclosed a full list of the victims. Nor have many important details about the attack been made public.

Among them: what transpired between Ramos and the school officer who first encountered him; who saw the online posts attributed to him; what, if any, history he had with Robb Elementary; and why he went on the rampage.

HOW MANY MASS SHOOTINGS HAVE THERE BEEN IN U.S. SCHOOLS?

There have been 14 shootings that have claimed four or more victims’ lives at U.S. schools and colleges since 1999, when two students killed 12 of their peers and a teacher at Colorado’s Columbine High School in 1999. That’s according to a database compiled by The Associated Press, USA Today and Northeastern University, and to other AP reporting. These mass attacks have killed 169 people in all.

The massacre in Uvalde was the deadliest since December 2012, when 20 first graders and six educators were killed at Sandy Hook Elementary in Connecticut by a gunman who had just killed his mother.

This AP digital embed table shows school shootings since 2007 that killed more than four people. The massacre at Robb Elementary School in Uvalde, Texas would mark the 11th such shooting. This table is current as of May 24, 2022 and will be updated as events warrant. Source: The Associated Press, USA Today and Northeastern University.