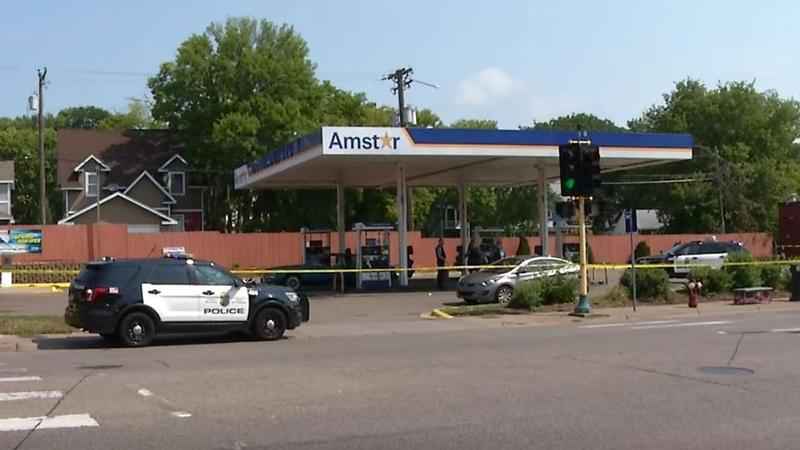 The scene where a fatal shooting happened in Minneapolis on Monday, Aug. 9, 2021. (KSTP)

A 17-year-old is being tried as an adult in connection with a fatal shooting last August at a north Minneapolis gas station, court documents show.

Khalil Shabazz of Minneapolis is charged with one count of second-degree murder. He is accused of shooting and killing 36-year-old Telly Tramaine Blair the morning of Aug. 9 at the Amstar gas station at West Broadway Avenue and Knox Avenue North.

According to the criminal complaint, officers found Blair in a car, he was shot multiple times and “bleeding profusely.” He was taken to North Memorial Health Hospital and was later pronounced dead.

The charging document describes footage from the time of the shooting, which shows the gunman peek over a fence bordering the gas station parking lot, walk around it, and motion toward the victim’s car. He then walks into the store, goes to the back, and exits through the front door without touching or buying anything.

Upon leaving the store, the gunman walks up to Blair’s car, fires into the vehicle and runs away.

A Minneapolis police officer received a tip from an informant that Shabazz had shot Blair and lived close by the crime scene. The informant showed them photos of Shabazz, which matched up with the suspect description from surveillance footage.

The Brooklyn Park Police Department also learned from a separate informant that someone was trying to sell the murder weapon — a .40 caliber Ruger handgun — and that Shabazz walked up to the victim, asked him where he was from, and started shooting.

Police arrested Shabazz at the home described by the informants, and police executing a search warrant on the home were able to recover clothes that appeared to match what the shooter was seen wearing on surveillance footage.