Police have taken a suspect into custody in connection with a shootout that left two people dead and eight others injured early Saturday morning outside Monarch nightclub in downtown Minneapolis.

According to the Minneapolis Police Department, at 1:59 a.m., officers working bar close in downtown heard sounds of gunshots in the area of 300 block of North First Avenue.

Police said officers ran to the gunfire and encountered an "exceptionally chaotic scene."

According to police, officers attempted to secure the scene and get Minneapolis Fire and Emergency Medical Services into the area but were having difficulty due to the number of people in the area. A help call was put out and officers from inside and outside of Minneapolis came to the area to help restore order. 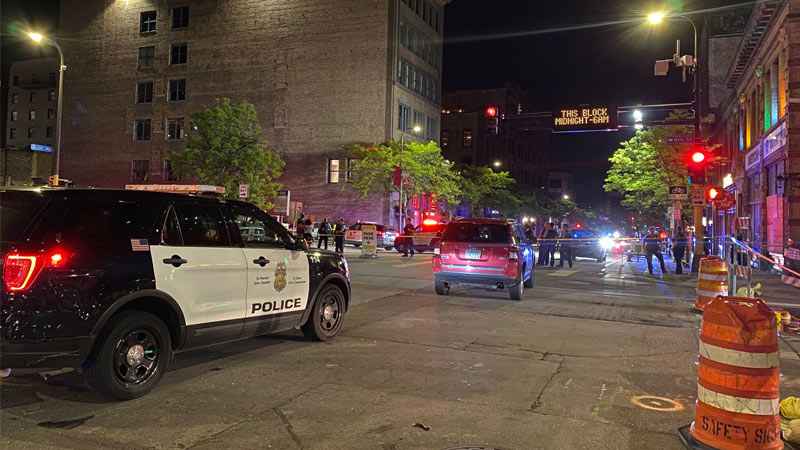 Preliminary investigation reveals that two people were standing in a crowded area and got into a verbal confrontation. Both individuals pulled out guns and began shooting at each other.

One of the gunmen was killed in the shootout. The other suspect, identified as 23-year-old Jawan Contrail Carroll, was taken into custody early Saturday afternoon in Bloomington with the help of the Bloomington Police Department. He is being held in the Hennepin County Jail on probable cause murder. He has not been formally charged.

One of the men who were killed has been identified as Charlie Johnson, a recent graduate of the University of St. Thomas School of Engineering. The university said he was recognized at all three commencement ceremonies on Saturday and a family member accepted his diploma on his behalf.

“Our community is shocked and saddened by the news of Charlie’s death. We grieve with his family and friends and pray for their comfort," University of St. Thomas President Julie Sullivan said in a statement. "On a day he and his family should have been celebrating his graduation from our School of Engineering, we are devastated by this loss."

Of the 10 victims shot, preliminary information shows all are adults. Of the eight people who were injured, three were men and five were women. One is in critical condition, and the other seven have non-life-threatening injuries.

All but one of the injured were transported by ambulance to Hennepin County Medical Center. The other showed up at North Memorial Health Hospital in Maple Grove.

In a statement, Monarch said after talking with police and reviewing security footage, it is believed that the two gunmen involved in the shooting were not patrons of the nightclub and got into a fight in the parking lot adjacent to the building.

"As responsible business owners working downtown for over 25 years, we do all that we can to provide a secure and safe environment for our customers. In addition to having enhanced private security and metal detectors, we also ensure a regular presence of off duty police officers on patrol. Despite these precautions, we cannot control what happens outside of our club and on another property," the statement said in part.

Monarch said it will remain closed until next Friday, May 28.

Minneapolis Mayor Jacob Frey addressed another night of violence in Minneapolis, including two fatalities Downtown and one in North Minneapolis.

"Last night again brought tragic news. Again, our collective conscience is shocked. Lives have been lost on our Northside and downtown. And we are left to process the reality that bullets have struck innocent bystanders, people welcoming the warm weather and celebrating being together again.

"These outcomes are not fated. We can stem crime in our city, but it will take all of us coming together with a renewed commitment to preventative work and a shared resolve to stop the gun violence and bring the perpetrators to justice. Both Chief Medaria Arradondo and Director Sasha Cotton – two of this country’s foremost experts in their fields – have my complete support in securing the resources they need for the hard work ahead."

Minneapolis Police Chief Medaria Arradondo also came out with a statement regarding the violence.

"These brazen senseless acts of gun violence must stop. The perpetrators of these crimes should never find refuge or anonymity in our communities. Minneapolis police officers will continue to rush into harms way to save lives however we need help from community leaders and residents to stand up and speak out denouncing loudly that they will not tolerate this violence as well. Our greatest strength is when we all work together to keep our city safe. Our children are watching us and how we respond during these times. Let’s come together to uplift hope and peace."