UPDATE: Authorities say a suspect who was taken to a hospital Wednesday after he was hit by a law enforcement squad vehicle has now died.

The Ramsey County Sheriff’s Office said deputies responded to the 2200 block of Mounds View Boulevard at 10:40 a.m. to help Mounds View Police with a felony domestic assault that involved a gun being fired at AmericInn.

There, law enforcement helped ensure the domestic violence victim’s safety and learned the suspect’s description. Officers located him a short time later in the 5200 block of Pinewood Court, and he raised a gun and fired at the approaching squads, narrowly missing two officers and damaging one Mounds View and one Ramsey County squad. At that time, the deputy who was shot at used his squad to hit the suspect, the sheriff’s office said.

Authorities then started rendering aid to the suspect before he was taken to Hennepin County Medical Center. Ramsey County Sheriff Bob Fletcher said the suspect was in serious to critical condition. 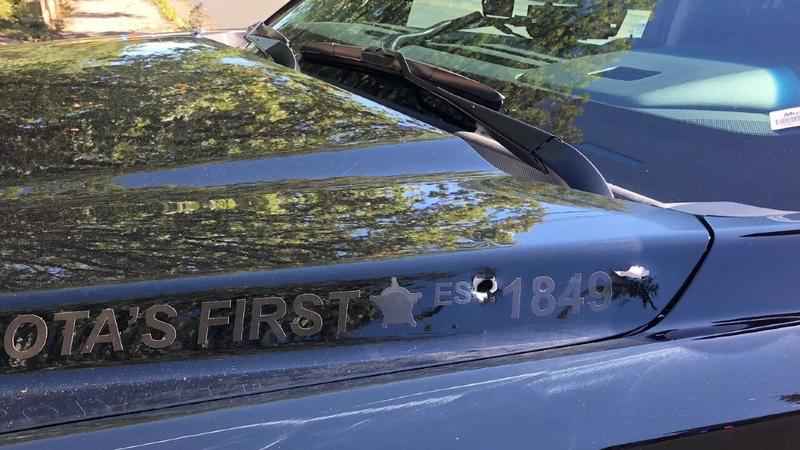 "We would far rather that our deputies use their vehicle to stop the threat than to attempt to get out and fire a handgun. It’s safer for the surrounding neighborhood — as you can see, the suspect was in someone else’s yard at the time — so the use of the vehicle is the preferred option in this case," Fletcher told 5 EYEWITNESS NEWS.

Investigations into the domestic assault and the shooting are underway and will be handled by the local departments. The Minnesota Bureau of Criminal Apprehension will investigate the officer-involved use of force.

The suspect’s name will be released by the BCA at a later time.

5 EYEWITNESS NEWS is working to gather more information at a scene in Mounds View Wednesday.

The Minnesota Bureau of Criminal Apprehension was at the scene and investigating an "officer use of force incident" that occurred.

Police had gathered in the area of County Road H2 and Pinewood Court just before noon, according to a 5 EYEWITNESS NEWS crew at the scene.

An ambulance was also noted at the scene.

Neighbors tell me they heard a few gunshots then walked outside to squad cars. pic.twitter.com/1lALF4GCRf

Additional information was not immediately available.